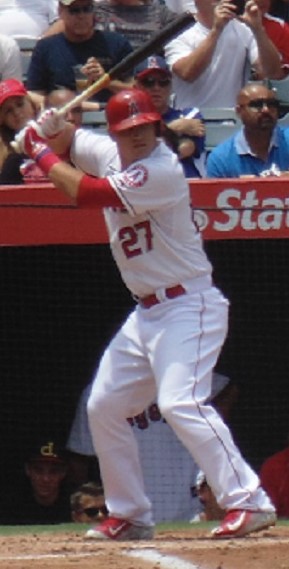 Photographed by yours truly at Angel Stadium, Trout begins a swing that hit one over the left center field fence.

Those looking forward to any kind of bidding war for baseball’s best player after the 2020 season, sorry to disappoint you. Really. Bryce Harper looking forward to him joining up with the Phillies, about an hour south of where he was born and raised, can quit looking now.

When the Phillies signed Harper for thirteen years and $330 million, I suggested that plus the Manny Machado deal in San Diego (ten years, $300 million) would do Mike Trout the biggest favour of anyone. And if ESPN’s Jeff Passan is right, and the Angels are putting the finishing touch on a contract extension that’ll pay him $36 million a year for ten years after his current deal expires after the 2020 season, then I was right, too.

The one supposition in baseball today that nobody was going to contradict is that Trout was going to be an extremely wealthy young man. In human terms, he’ll still be a young man when the extension finishes its course, though in baseball terms he might be a senior citizen at age 40.

Including his 2019 and 2020 salaries Trout has $430 million coming until 2030. And he probably agreed to take less than he’s actually worth, which tells you the state of free agency now, but that wasn’t exactly Trout’s obsession. Staying with the only team he’s ever played for was probably far more important. For himself and for the game itself, since single-team careers were actually as comparatively rare before free agency as after. (And, yes, you can look it up.)

And if he keeps playing for at least half the term at the level he’s played since his first full major league season, Trout will graduate from legend to demigod, a status from which he’s not exactly long distance as it is now.

I’ve been tinkering with the concept of a real batting average for awhile. My original formulation didn’t quite satisfy, because I thought I needed to draw a better bead on figuring what a batter actually does by and for himself at the plate. The traditional batting average’s flaw is that it really should be considered a hitting average: it divides hits by official at-bats and treats all hits equally. Stop me if you get the idea at once.

But 1) all hits are not equal; and, 2) batters also draw unintentional walks and, believe it or not, perform sacrifices. If that seems like I’m approaching on-base percentage, yes, OBP is really a better way to measure a batter but it, too, accounts solely for official at-bats. So, out goes my original idea and in comes this measure: total bases (TB) plus walks (BB) plus sacrifices (SAC)  divided by plate appearances. Or, TB + BB + SAC / PA. Yes, I can think of any number of my childhood math teachers who’d need psychiatric attention after seeing me tinkering this way, since I was about as good a math student in school as B.B. King was at playing a vibraphone.

I’ve spent the past couple of days examining by that formula every Hall of Fame position player who played the majority of their careers in the post-World War II/post-integration/night baseball era. Here are the tables:

Now, I give you the $430 million Angel through the end of last season:

Think about that a moment. In terms of a real batting average, accounting for all his plate appearances, the real value of his hits, plus his walks and sacrifices, Mike Trout has a higher real batting average than all but one post-World War II/post-integration/night baseball-era Hall of Famer, and he’s only behind Ted Williams by ten points while being ahead of runner-up Mickey Mantle by 31 points. (And, to put things into further perspective, Trout’s home ballpark isn’t exactly a hitter’s paradise.)

In case you were wondering, here’s where Bryce Harper and Manny Machado, the big nuggets of this winter/spring’s free agent class (whose home ballparks until now haven’t exactly been hitters’ paradises, either, though Nationals Park is more neutral), happen to sit lifetime so far:

Bet on it: If Trout had hit his first free agency this winter/spring, Harper and Machado would have been footnotes by comparison. All three have played in all or parts of the same number of major league seasons (seven), all three have been considered among the game’s elite, but Trout leaves Harper and Machado far enough behind that they’ll need GPSs to keep an eye on him.

Now we can mention the secondary details, such as Trout is going to earn the highest average annual salary on the extension in baseball history, for now. Not to mention all reporting on the deal saying that Trout’s extension, like Harper’s new deal, has no opt-out clause and full no-trade protection. And, we can think aloud about the reasons beyond his baseball virtuosity that Trout was shown that kind of money: he may be the one player in baseball above all others now who couldn’t care less about it.

Baseball may have a real problem in making its best player the game’s face, but Trout isn’t exactly in a big hurry to cash in on the idea and never really was. If he got endorsements and television spots off the field, he didn’t go out of his way to hunt anything more. They came to him, he’d accept, but he wouldn’t lobby for more endorsements, bigger dollars from them, more branding from them. He’s the lowest maintenance superstar baseball’s seen in a couple of generations.

Maybe the only extravagance Trout was ever known to indulge (his known passion for meteorology is just that, a passion) was his proposal to the young woman who’s been his love since high school and his wife since December 2017—he hired a skywriting team to pour out, “Will you marry me Jess?”

Now, if only the Angels, who aren’t exactly in the poorhouse despite deciding to make Mike Trout worth the economy of a single tropical paradise, can figure out a way to build a team baseball’s best player and the no-questions-asked best ever to wear an Angel uniform can be proud of.