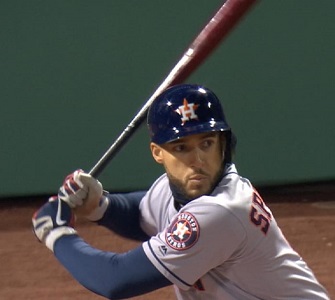 George Springer fully recovered should be big for this year’s Astros, among other things to look forward to . . .

A few almost idle comments on my podcast last weekend to the contrary, I really have no interest in predicting how baseball season to come will transpire. Other than to say that it’ll be fun to watch, and fun to analyse, on human and statistical terms alike, I am strictly obedient to Berra’s Law: It ain’t over until it’s over. Even the known tankers are liable to burp a surprise or two out.

I’m looking forward to watching the Mets’ Jacob deGrom, the defending Cy Young Award winner, tangle with the Nationals’ Max Scherzer on Opening Day. If it’s not quite the equal of a hypothetical Opening Day contest between Juan Marichal and Sandy Koufax, or Tom Seaver and Steve Carlton, or Randy Johnson and Greg Maddux, it’ll probably be as close as it gets. So, barring injury or performance relapses, will deGrom’s and Scherzer’s season to come.

I’m looking forward to seeing whether the Red Sox—defending world champions for the fourth time this century—really do have a second consecutive run to the Promised Land in them, since they didn’t do that much to reinforce themselves over the winter but have the hard core of their World Series winner intact and very much in good enough shape.

I’m looking forward to seeing whether the Dodgers take the seventh consecutive National League West title the rest of the world seems to think is theirs for the taking; and, if they do, whether they’ll get back to the World Series a third straight season but get back to the Promised Land at last. Or, whether they’ll take yet another trip to the mountaintop, get a grand panoramic view, and then take yet another nasty kick off the edge to the rocks below.

I’m looking forward to seeing whether Kris Bryant (Cubs) and George Springer (Astros) have overcome their injury issues fully enough to return as the formidable threats they’ve been in the past. Baseball’s even more fun when players such as those two are at the top of their game.

I’m looking forward to seeing whether Justin Verlander’s reunion with his changeup will keep him formidable even as his Astros seem on paper to have the continuing title to the American League West. And, to seeing Alex Bregman continue to shake off last year’s catch of the season at his expense and solidify himself as Matt Chapman’s competition for the title of baseball’s current best all-around third baseman.

I’m looking forward to seeing whether Aaron Judge gets his wish and the Yankees smash their own freshly-set record for team home runs in a season. And, whether (as I examined very recently) it means concurrently that the Empire Emeritus returns to the Promised Land at last.

I’m looking forward to seeing how long the Blue Jays continue to hold out on promoting Vladimir Guerrero, Jr. to the Show, even allowing that they got the perfect excuse to start his season in the minors thanks to the oblique injury he suffered last week.

I’m looking forward to seeing whether baseball’s experiment with the independent Atlantic League trying out a few proposed new rule changes, some of them viable and some just plain cockamamie, shows the changes to be either as reasonable as some seem to be and as ridiculous as others seem. Especially, on the cockamamie side, those born of abject ignorance and willful blindness.

I’m looking forward to seeing whether this year’s imposition of a single trading deadling (31 July) and elimination of the 31 August waiver trade deadline really will force teams to assess and concentrate on their actual team and organisational depth.

I’m looking forward to a somewhat wild National League East race and a reasonably interesting National League Central race, especially with the Reds having remodeled so intriguingly in the off-season and the Cardinals hoping their reinforcements mean they might stay the distance this year. And, whether the surprisingly remodeled Twins really have what it takes to dump the Indians in the otherwise nothing-special American League Central.

I’m looking forward to seeing whether the Angels have really awakened enough to put on the field a team their best player, who happens to have been baseball’s best player from almost the absolute beginning of his major league career, can be proud of at last. And, if they do or they think they do, whether they’ll move to make him an Angel for life before he succumbs to the whispers from Harper and others about making the rest of his baseball life an hour from his native New Jersey soil.

I’m looking forward to seeing The Mariano, Edgar Martinez, Mike Mussina, the late Roy Halladay, and Lee Smith inducted into the Hall of Fame come July; and, to seeing how many more people hold their noses when Harold Baines is inducted than when Jack Morris was.

I’m looking forward to the Mets’ golden anniversary celebration of their 1969 miracle World Series winner, even with the sorrow that Hall of Famer Tom Seaver can’t be part of it except in spirit. And I still hope baseball finds a way to join the Reds commemorating their 1919 World Series winner and saying, at long enough last, “You could have and might have won that Series if it was played entirely straight, no chaser.” Well, I can dream, can’t I?

And, I’m looking forward to seeing some games in the new Las Vegas Ballpark, the new home of Las Vegas’s Triple-A minor league team, formerly the 51s and now renamed the Aviators (in honour of the one-time aviator whose corporation bought the team), and now the AAA affiliate of the Athletics.

A baseball game in Cashman Field may have been fun, but the park itself was rather like sitting in a AAA version of the Polo Grounds when the embryonic Mets played there: ramshackle, despite the pleasantry of the mist sprayers above the seats surrounding the home plate area on the brutally baking summer days that mark summertime Las Vegas equal to the washing lights of the nighttime Strip. Las Vegas Ballpark, due to be completed by Opening Day, looks to be a near-perfect place to watch a game.

I have tickets for the Aviators’ third game of the season, finishing a set against the Sacramento River Cats, whose major league parents are the Giants. The A’s may offer up another surprise American League West contention; the kindest thing you can say for this year’s Giants so far is that, well, they’ll show up, do their best with what they have, and hope for a good draft and maybe a trade deadline possibility that continues a badly needed farm replenishment. In manager Bruce Bochy’s announced final season on the bridge, those three World Series championships in that five-season span look almost as far in the rear view mirror as Pontiac.

Meanwhile, I’m also looking forward to what happens this season for one of the great nickname possibilities in baseball—young Nationals middle infielder Carter Kieboom. He’s hit three home runs this spring training, two against the wind. A season full of blasts such as those and any time someone hollers kaboom! over this or that explosion it means free publicity for him.