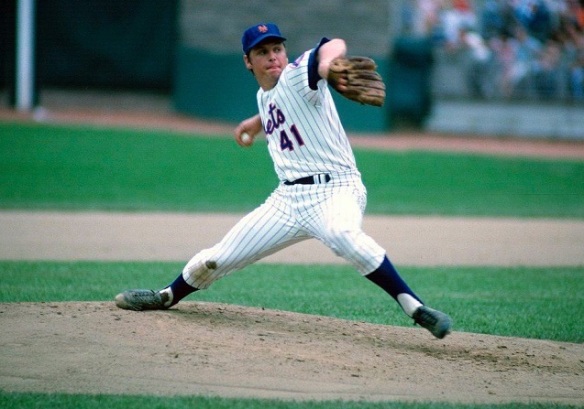 Writing for Harper‘s in 1977, A. Bartlett Giamatti—a decade before he left the presidency of Yale for that of the National League in a romantic instance of upward mobility—mourned with New York when the impasse between the Mets and Tom Seaver ended with Seaver’s exasperated demand for a trade. And, with the Mets trading him to the Reds. The Saturday Night Massacre.

Giamatti mourned not just the front office foolery that led to the Mets trading The Franchise at all, but the loss to New York of Seaver the young man, recalling a 1971 evening he and his wife got to spend with Seaver and his wife at a then-literary light’s home adjacent to Seaver’s then Connecticut home:

Seaver had . . . dignitas, all the more for never thinking for a moment that he had it at all. A dignity that manifested itself in an air of utter self-possession without any self-regard, it was a quality born of a radical equilibrium. Seaver could never be off balance because he knew what he was doing and why it was valuable . . . With consummate effortlessness, his was the talent that summed up baseball tradition; his was the respect that embodied baseball’s craving for law; his was the personality, intensely competitive, basically decent, with the artisan’s dignity, that amidst the brave but feckless Mets, in a boom time of leisure soured by division and drugs, seemed to recall a cluster of virtues no longer valued . . .

Of course Tom Seaver wanted money, and wanted money spent; he wanted it for itself, but he wanted it because, finally, Tom Seaver felt about the Mets the way the guy from Astoria felt about Seaver—he loved them for what they stood for and he wanted merit rewarded and quality improved. The irony is that Tom Seaver had in abundance precisely the quality that [then-Mets chairman] M. Donald Grant thinks he values most—institutional loyalty, the capacity to be faithful to an idea as well as to individuals . . . The anguish surrounding Seaver’s departure stemmed from the realisation that the chairman of the board and certain newspaper columnists thought money was more important than loyalty, and the fury stemmed from the realization that the chairman and certain writers thought everybody else agreed with them, or ought to agree with them.

That’s still probably as close as anyone has come to distilling both Seaver’s core, on and off the mound, and the fractured Mets’ fan’s heart as expressed by a banner hung from a Shea Stadium rail the day after the trade:

I WAS A
BELIEVER
BUT NOW WE’VE
LOST
SEAVER

Seaver (left) with fellow Hall of Famer and oenophile Sandy Koufax at a Cooperstown induction ceremony.

Giamatti interpreted it to mean “lost faith in the Mets’ ability to understand a simple, crucial fact: that among all the men who play baseball there is, very occasionally, a man of such qualities of heart and mind and body that he transcends even the great and glorious game, and that such a man is to be cherished, not sold.”

The truly sad news is that even such a man can’t transcend nature’s cruelties.

Tom Seaver has been diagnosed with dementia. His family announced it Thursday, not long after his 1969 Mets teammate Art Shamsky disclosed his struggle with short-term memory loss, in an excerpt from Shamsky’s forthcoming After the Miracle, a chronicle hooked around the 1969 triumph and a final journey to Seaver’s California home and vineyard by Shamsky and other Miracle Mets teammates.

Shamsky already suspected, based on that visit, that Seaver wasn’t likely to be part of commemorations this year for the 1969 Mets. The formal announcement of Seaver’s condition, from his family by way of the Hall of Fame, turned suspicion into sad reality: Tom will continue to work in his beloved vineyard at his California home, but has chosen to completely retire from public life.

The arguable sixth to eighth best starting pitcher ever to play the game, and arguably in a dead heat with Randy Johnson as the best post-World War II starter, Seaver was intelligent and personable and possessed of a fine, dry wit. During the 1969 World Series, when Hall of Famer Sandy Koufax (working as an NBC baseball analyst and commentator) asked him whether God was a Met fan, Seaver said with a slight grin, “I don’t know, Sandy, but I think He’s rented an apartment in New York this week.”

Seaver’s health issues began when he was stricken with Lyme’s disease in 1991, then suffered a recurrence in 2012, leaving him with Bell’s palsy and short-term memory loss. Though he’d enjoyed visitors to his vineyard (including Koufax, himself an oenophile) and always enjoyed seeing former teammates, not to mention appearing at the annual Hall of Fame inductions, Seaver had cut his public appearances back considerably since that 2012 illness.

Even Andy Warhol found Seaver one of a kind . . .

The 1977 contract extension rift was compounded by Seaver’s criticism of the reeling Mets’ administration for refusing to invest in both replenishing their farm system and the early free agency market. And, by Grant’s foolish public remark that the Mets had won two pennants “without superstars” and would do it again. (As the Mets continued their mid-to-late 1970s decline, the fabled Shea Stadium Sign Man, Karl Ehrhardt, pricked Grant routinely by hoisting a sign saying WELCOME TO GRANT’S TOMB, which helped the Mets alienate Ehrhardt for decades to follow.)

Then the Mets laid a second screwing upon their three-time Cy Young Award winner. Re-acquired from the Reds for 1983, Seaver was inadvertently left off the protected list, in the short-lived compensation pool allowing teams who’d lost players to free agency to claim another player from anywhere. The White Sox claimed Seaver, who won his 300th career game in their uniform—and in Yankee Stadium.

Those were no ways to treat the Franchise. 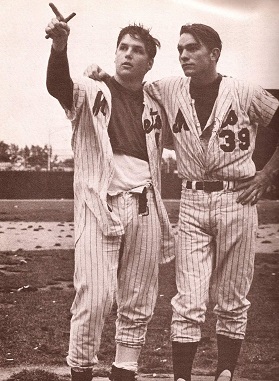 He finished his career with the 1986 Red Sox, where he was unable to partake in the World Series due to a knee injury, which probably suited New York just fine. They’d already demanded penance from the Mets’ administration for letting Seaver win number 300 in that foreign playpen in the Bronx. Letting him pitch even one inning against the Mets in a World Series would have been worth a public execution.

No genuine Met fan blamed Seaver, of course. And he thought of returning to the Mets in 1987 when they needed pitching help, but a couple of poor gigs at their then-Tidewater AAA farm convinced him to call it a career. A year later, he appeared at Shea Stadium when the Mets retired his number 41; characteristically, Seaver strode to the mound and bowed to the cheering crowd in all directions before leaving.

Seaver made such impressions practically from the beginning. Making his first All-Star team in his rookie season, 1967, Seaver felt compelled to introduce himself to his fellow future Hall of Famer Henry Aaron. “Kid, I know who you are,” Aaron replied, “and before your career is over, I guarantee you everyone in this stadium will, too.”

“Blind people come to the park just to listen to him pitch,” Hall of Famer Reggie Jackson once said. As well they might regarding one of only two pitchers with over 3,000 strikeouts and a lifetime ERA below 3.00 on their resumes. (The other? Hall of Famer Walter Johnson.)

Tug McGraw, the ’69 Mets relief pitcher, about whom Seaver said, “He’s got about forty-eight cards in his deck,” once said that when Apollo 11’s Neil Armstrong and Buzz Aldrin walked on the moon, he knew the Mets had a chance. (McGraw died of brain cancer in 2004.) Seaver saw things a little less esoterically: “There are only two places in the league—first place and no place.”

Seaver held up. His character proved as durable and as strong as his arm. He was authentic; neither a goody two-shoes nor a flash-in-the-pan, he matured into the best pitcher in baseball. Character and talent on this scale equaled a unique charisma. He was a national symbol, nowhere more honoured than in New York, and in New York never more loved than the guy who seemed in every other aspect Seaver’s antithesis, the guy who would never give a sucker an even break, who knew how corrupt they all were, who knew it was who you knew that counted, who know how rotten it all really was—this guy loved Seaver because Seaver was a beautiful pitcher, a working guy who got rewarded; Seaver was someone who went by the rules and made it; Seaver carried the whole lousy team, God love ’em, on his back, and never shot his mouth off, and never gave in, and did it right. The guy loved Seaver because Seaver did not have to be street-wise.

In 1977’s Oh, God! John Denver’s earnest supermarket manager asks George Burns’s God about working miracles to send messages. After demurring on grounds of too much flash, Burns/God continues: “Oh, now and then I do one just to keep My hand in. My last miracle was the 1969 Mets. Before that, I think you have to go back to the Red Sea. Aaaaah, that was a beauty!”

It would not be unreasonable for those who love baseball to pray for Seaver to receive a miracle now.