My phutile attempt to imagine how the 1930s Phillies’ Lifebuoy endorsement was, shall we say, augmented editorially by a disgruntled fan . . .

Once upon a time, the Phillies played in a ballpark shaped more or less like a sardine can, with the field looking as though shoehorned into a gymnasium. The place was called Baker Bowl, and the high aluminum right field wall once bore a team endorsement for a deodorant soap. With the Phillies not exactly being National League oppressors at the time, a particularly disgruntled fan managed to add to the ad’s slogan, making it read, “The Phillies Use Lifebuoy . . . and they STILL stink!”

In the same decade (the 1930s), the Dodgers earned their legendary nickname the Bums, thanks to a cabbie asking a passenger, “How did our bums do today?” The passenger was  legendary New York World Telegram cartoonist Willard Mullin; the exchange inspired Mullin’s fabled remake of Emmett Kelly, Sr.’s “Weary Willie” hobo into the eternal representation of the Dodgers. The Bums were bums enough that one angry fan took his paint to Ebbets Field’s occupancy law sign, making it read, “Occupancy by more than 35,000 unlawful. And unlikely.”

You thought fan trolling began when Yankee fans trolled Curt Schilling during the 2001 World Series, after he alluded somewhat sarcastically to the Stadium’s “mystique and aura” to be greeted with, “Mystique and Aura. Appearing Nightly?” When George Steinbrenner’s worst of the 1980s inspired a Yankee Banner Day parade winner wearing a monk’s hooded cassock and hanging a sign saying FORGIVE HIM, FATHER, FOR HE KNOWS NOT WHAT HE DOES from the Grim Reaper’s scythe? When Red Sox fans began chanting “Darr-yllll! Darr-yllll!” at a certain Mets outfielder who wasn’t exactly breaking the neighbourhood on the Boston leg of the 1986 World Series? When assorted Cub fans at Wrigley Field whipped up placards saying WAIT ‘TILL NEXT YEAR—on Opening Day when the season’s first pitch was thrown? When seven Original Met fans greeted the Dodgers’ first return visit to New York by unfurling, in perfect sequence, from an upper deck rail, seven window shades spelling out:

When done properly, with genuine wit, and without truly frothing malice, fan trolling is as much fun as a game-ending home run—or, if your team faces the bases loaded, a full count on the enemy hitter, the winning run at first base, and nobody out, your heroes turn a game-ending triple play. (Yes, it’s happened, though not with the bases loaded. The first victims, what a surprise, were the Mets, who ran themselves into one in August 2009, and unassisted yet, when Jeff Francoeur—batting with first and second—lined to Phillies second baseman Eric Bruntlett, who stepped on second and tagged the runner advancing from first in a near flash. Obviously the Mets needed Lifebuoy.)

Even Dodger fans enjoyed a sad chuckle when, with the Cardinals about to push the Dodgers out of a postseason and now-traded Yasiel Puig at the plate, a Busch Stadium fan held up a placard hailing, “Dodgers win? When Puigs fly!” The late Karl Ehrhardt would have been proud. So would the ancient Dodgers Sym-Phony Band, whose atonal racket charmed Ebbets Field fans and the Dodgers alike. Especially when they’d play “Three Blind Mice” after close calls went against the Dodgers. (The humourless umps actually tried getting injunctions against that and also against Ebbets Field organist Gladys Gooding for similar musical crimes against their dignity.) Or, trailing an enemy pitcher knocked out of the box, the Sym-Phony bass drummer would beat his drum to the pitcher’s steps back to the dugout, where taking his seat in the dugout (if he didn’t go to the clubhouse first) received a loud SPLAT! of bass drum and cymbal in unison. 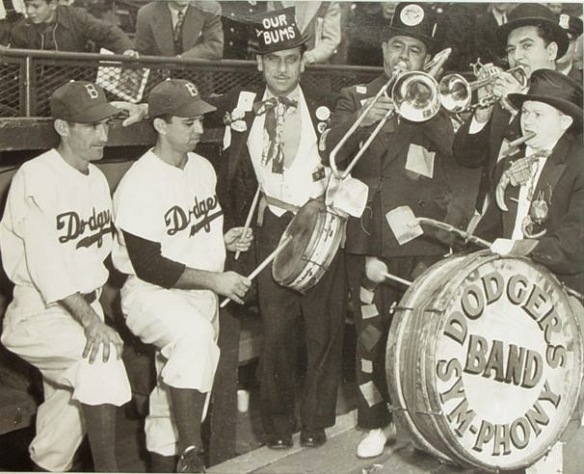 Karl Ehrhardt was the fabled Sign Man at Shea Stadium for a very long time (1964-1981), assembling handsome, colourfully-lettered, sometimes made-on-the-spot signs to address plays or situations. His parents moved their family from Germany to Brooklyn when he was six; he grew up a Dodger fan and became a commercial graphic artist by profession. He was known to bring as many as sixty of his reputed 1,200 signs to a given game, picking them according to whom the Mets would play and what he thought was likeliest to happen in a game, and he rarely misstepped.

A favourite was one of his greetings to an enemy pitcher who’d just been knocked out of the box: LEAVING SO SOON? (An alternate: Y’ALL COME BACK NOW, HEAR?) To an enemy pitcher walking a Met hitter intentionally: CHICKEN. To the Orioles with the Mets three outs from their miracle 1969 World Series conquest: BYE, BYE, BIRDIES! To any Cub foolish enough to argue with the umps over a close call going to the Mets: BACK TO YOUR CAVE, BEAR! (When the Orioles argued a close infield play during the Series, it was BACK TO YOUR NEST, BIRD!) After a win over the Cardinals, it was likely to be 5 AND 20 REDBIRDS BAKED IN A PIE!

When Athletics owner Charlie Finley tried to remove hapless second baseman Mike Andrews from the 1973 World Series roster, after two Game Two misplays in Oakland helped the Mets win in extra innings, Ehrhardt was more than prepared. Sure enough, there was an Oakland field miscue in the bottom of the first in Game Three. Up went the Ehrhardt sign: YOU’RE FIRED! (No, we don’t know whether Donald Trump was among the stadium crowd that afternoon.)

But he also knew how to let his own heroes have it when they were playing less than heroically. HE’S HOT TONIGHT! worked either for a Met on a streak or a Met in a slump. IT’S ALIVE! usually greeted a Met breaking out of a slump or a customarily weak hitter reaching base. JOSE, CAN YOU SEE? usually greeted any player named Jose, Met or opponent, who’d struck out. (It started with Jose Cardenal.) Clearly the man who had those plus KONG! and THE KING OF SWING! ready for one of Dave Kingman’s orbital home runs, ORANGE CRUSH! for big hits by Rusty (Le Grande Orange) Staub, and THEY SAID IT COULDN’T BE DONE! for the Miracle Mets’ first parade down New York’s Canyon of Heroes, deserves enduring recognition.

Ehrhardt’s days in the Shea third base field boxes ended after he became fed up with the team’s seemingly willful dissipation in the mid-to-late 1970s, with then-boss M. Donald Grant a particular target for having screwed the Tom Seaver pooch. WELCOME TO GRANT’S TOMB was probably the mildest of Ehrhardt’s trolls to the front office. Once a concurrent fixture at Mets team functions, Ehrhardt’s zaps made him persona non grata there, and, as he eventually said, “They turned their back on me so I turned my back on them.” But a later Met administration convinced him to return for the team’s 40th anniversary, a one-off appearance for which he shocked Met fans by hoisting THE SIGNMAN LIVES! before returning to his private life until his death in 2008.

Fans so often turn trolling into an art worthy of Fred Allen, Groucho Marx, Gracie Allen, Flip Wilson, Jack Benny, George Carlin, P.J. O’Rourke, and Jokey Smurf. But so do those involved with baseball professionally—as anyone can tell you who saw Roger McDowell bomb Mets first base coach Bill Robinson with a time-delayed hotfoot, or Joey Votto trolling road fans by chasing down foul grounders as if they were potential double play balls before they could become fan souvenirs. If the Yankees had beaten the Red Sox in this year’s American League division series, Aaron Judge would be the most powerful contender for the troll awards, thanks to his zapping the Red Sox as he left Fenway Park for the series move to the Bronx by playing “New York, New York” on his boom box.

Except that the Red Sox dumped the Yankees quickly and without a loss in the Stadium. No less than former Yankee star Mark Teixiera reminded Judge what happens when you awaken a sleeping giant. Even MLB itself, whose social media staffers know a thing or two about symbolism, couldn’t resist hitting the Yankees where it hurt on Twitter:

Having been unable to exhume the actual identity of the staffer whose genius it was to create that impossible to top fashion statement, we’ll just have to settle for giving  Throneberry Fields Forever’s first annual Karl Ehrhardt Prize for Extinguished Trolling thus: 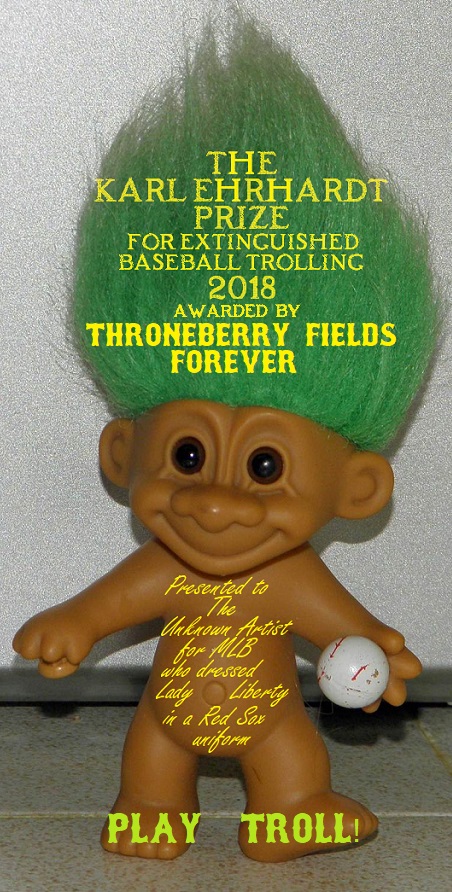 Give us your tired, your poor, your huddled Yankee fans yearning to breathe, period; the wretched refuseniks of the steaming Stadium. Send these, those homeless, Series-ringless-this-time-round to me. And lift your braying ears before the House That Ruthless Built!