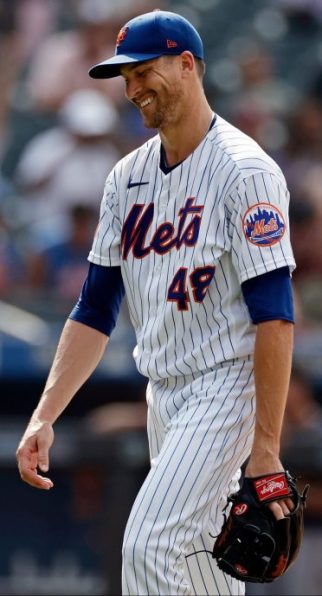 In the end, Jacob deGrom wanted to be closer to home for five years. The Rangers gave him what he wanted and with handsome dollars. But the second-best pitcher in Mets history will be missed in New York.

Of course it’ll be strange to think of and see Jacob deGrom in a Rangers uniform. And of course the social media universe, especially those whose baseball fealty belongs to the Mets, blew like a kitchen full of whistling tea kettles over the news that deGrom signed for five years, ages 35-39, and $185 million.

Assuming a return to health, and no such further rude interruptions along the way, deGrom gives the Rangers instant credibility and the Mets the accelerated need to fill a starting rotation hole about the size of Stonehenge. With deGrom off the free agency boards, Justin Verlander now looks more like a delicious Met target.

For the Rangers, of course, the question is whether deGrom’s health will allow him to pick up where he left off before the injury assault began in May 2021. The Mets seemed just leery enough of that question and its potential answer to hold the line at the three-year deal Craig Calcaterra—the former NBC Sports baseball analyst now journaling independently—says most assumed before the Rangers offered five.

As Joel Sherman of the New York Post reported the Mets’ last offer to deGrom was around three years and $120 million. I don’t get the sense that that was a final offer or that the Mets walked away or anything, though. It was likely just the case that Texas came in with five and deGrom grabbed it, likely knowing it wouldn’t be beat.

And why wouldn’t the Rangers go for it? Texas starters had a collective 4.63 ERA last season, which ranked 25th in the majors. With deGrom at the top of the marquee above supporting players Martín Perez, Jon Gray, Jake Odorizzi, and introducing Dane Dunning, things seem poised for an improvement. The big question, of course, is whether the Rangers are going to see the insanely dominant Jacob deGrom of 2018-21 during this deal.

Until that May 2021 side injury, followed by a shoulder and then elbow injury forcing his season’s end early that July, deGrom wasn’t just off the charts, he was somewhere in his own solar system on the mound. His right scapula stress reaction took him out this year until 2 August, after which he pitched like deGrom until the stretch—when he pitched well but not quite deGrominantly.

“Some of that,” Calcaterra reminds us, “might’ve been a function of stamina but one never knows. Obviously the Rangers have seen his medicals and wouldn’t have offered him this deal if there were red flags, but deGrom will turn 35 in the middle of the 2023 season and no pitcher lasts forever.”

Let’s get this out of the way once and for all. No baseball player asks for injuries while doing his job. (Those who get injured being foolish off the field are often another matter.) It wasn’t deGrom’s fault that his 2021 was derailed by three injuries; it wasn’t his fault that his right scapula elected to hand him five-sixths of the 2022 season off.

Neither is it the Mets’ fault that they were leery of giving deGrom the fourth and fifth years he wanted and that the Rangers were willing to risk. They had baseball’s arguable best pitcher in their silks but his body betrayed him often enough to give them pause. Even if their owner Steve Cohen bought the team as much from his lifelong Met fandom as for anything else, he didn’t become wealthy enough to buy it by acting from his heart alone.

We’re beginning to learn a little more that not everything was entirely sweet between deGrom and the Mets. He never hinted publicly at discontent, and he had reason for discontent that few of his teammates did. Remember: this is the guy who’s still accused of not being a “winner” and not knowing how to “win” because, despite winning back-to-back Cy Young Awards in 2018-2019, he “won” only 21 games over both seasons.

They put up 3.57 runs per deGrom start, the third-lowest support average for any qualified pitcher in the majors that season. In the end, deGrom, owner of the league’s best ERA (1.70), finished 2018 with the same number of wins as the White Sox’s Lucas Giolito, owner of the league’s worst ERA (6.13). As the great Jayson Stark wrote of deGrom’s Cy Young case in The Athletic late in the season, “So are you still asking why we’re ignoring wins? It’s obvious, isn’t it? Because there isn’t a single entry on the stat sheet that tells us less about how this man has pitched than the entry that most people used to check first. That’s why.

He had the same problem not knowing how not to be on the 2019 Mets, too. That team put up 4.1 runs per deGrom start—but gave him only 3.6 runs to work with while he was in the game. For those two Cy Young seasons, deGrom’s fielding-independent pitching (you can consider it a man’s ERA when the defenses behind him are removed from the equation) was a sterling 2.32—and his 2018 1.98 FIP led the entire Show.

He could have sued his team plausibly for non-support, but to the public and even in his clubhouse deGrom was a chronic non-complainer. “Throughout deGrom’s career with the Mets,” writes ESPN’s Buster Olney, “he was a respected teammate, especially for how he handled a chronic lack of run support.”

But he also felt in some ways like an alienated man. deGrom may be a private young man but he’s not obscure. When he made known his intention to opt out of his Mets deal—which he had every right to do since the option to do it was in the deal—it was a sign that something between the pitcher and the organisation fell just enough out of whack to compel deGrom to think of continuing and finishing his career closer to home.

There isn’t a dollar amount on earth that can match that value in a man’s soul. Not that the Rangers aren’t trying.

It’s not unlikely that, giving him the fifth year he really wanted (plus an option for a sixth), deGrom’s average annual value of $37 million a year as a Ranger was still a bargain. Sometimes, the home town discount really means the man’s actual as opposed to baseball home town, or close enough thereto.

“[T]o some in the [Mets’] clubhouse,” Olney goes on to say, “he also became a little more distant from teammates over his years in the organization; he was a private person who seemed to become a little more private.”

It was a perception likely exacerbated by that time away from the field—391 days passed between his last start in 2021 to his first start in 2022. Some teammates . . . developed a relationship with Steve Cohen after Cohen bought the Mets the fall of 2020, but friends felt that deGrom wasn’t really interested in that.

deGrom also had reduced his interactions with the large contingent of media that descends upon the Mets’ clubhouse, regularly speaking to reporters after his starts but increasingly deflecting any other requests. Early in his career, deGrom had agreed to do in-game interviews in national broadcasts on the days he did not pitch. But as deGrom’s stature in the game grew, that practice ended.

Instead, deGrom preferred to just focus on pitching. He didn’t seem particularly interested in the pomp and circumstance that can come from playing baseball in New York, a sentiment conveyed to members of the Braves even before this offseason. Based on their conversations with deGrom, some Atlanta players felt certain that if given the chance, deGrom—who had grown up in Florida as a fan of the Braves—would prefer to sign with the team he rooted for as a kid.

Indeed the Braves put themselves in play for deGrom, but they, too, didn’t want to assume the risk of deGrom’s desired five years versus the chances of deGrom’s body betraying him (and them) yet again. The Rangers were not just willing, but they had a secret weapon when it came to landing deGrom: their new manager.

Bruce Bochy managed the 2015 National League All-Stars after winning the 2014 World Series with the Giants. deGrom was one of his pitchers, the league’s 2014 Rookie of the Year. Bochy, says Olney, was impressed by both deGrom’s humility and his sixth-inning performance of striking out the side with only ten pitches.

Freshly minted as the Rangers’ manager, Bochy now engaged deGrom on a Zoom call. “To Bochy,” Olney continues, “it was clear that deGrom’s focus was on family, on pitching, on competing. The Rangers continued to dig into deGrom’s background, his preparation; they learned that deGrom was already assessing the housing market in the Dallas area. Said one of deGrom’s friends from New York: ‘He’ll probably wind up on a ranch’.”

Having deGrom in Ranger silks isn’t exactly the ideal scenario or best interest for the ogres of the AL West, the world champion Astros. Their Cy Young Award-winning grand old man, Justin Verlander, is now a free agent. The Mets are now said to be all-in on making sure they can make Verlander a happy man for a season or maybe two, particularly re-uniting with his old Detroit teammate/rotation mate Max Scherzer.

“deGrom is the best pitcher in baseball when he’s healthy. There’s no replacement for his potential,” writes Smart Baseball author Keith Law in The Athletic.

There is, however, a way to replace his production, since he threw just 64 innings last year, and while they were, again, comically great innings–the man made eleven starts and walked eight guys, at least one of which was probably a clerical error–he was worth about two wins above replacement, and someone else had to make the 21 starts he didn’t make. The Mets could just throw $40 million at Justin Verlander for a year, tell him they give him as good a shot as anyone at getting him another 15-18 wins, after which he can go ply his trade for another team if they didn’t give him enough run support. If he really wants to get to 300 career wins, which would be fantastic to see, they’re a great choice.

The Astros don’t exactly lack for starting pitching; their rotation made a very distinct and vivid impression during the World Series and that’s without including Verlander in the picture. But losing Verlander to their fan base isn’t quite like losing deGrom is to the Mets’ fan base. Until he signed with the Rangers Friday night, the Mets’ long-anguishing, often-masochistic fan base thought and hoped deGrom would end up a Met for life.

They’ll have to settle for deGrom having been the second-best pitcher in Mets history, behind Hall of Famer Tom Seaver. (Jerry Koosman, you say? Dwight Gooden? Try again. As a Met, Koosman’s FIP is 3.26 and Gooden’s is 2.77. deGrom’s 2.62 as a Met beats them both. He’s also only five FIP points behind Seaver as a Met. He also has the best walks/hits per inning pitched rate as a Met of the four. Better not go further, lest we careen into heresy.)

They’ve had to settle for far worse. If you don’t believe them, they’ll be more than disgustingly happy to remind you—chapter and verse. At least until they see Justin Verlander shouldering into a Mets jersey at his introductory press conference, they may now dare to dream.