Tomorrow: the newcomers. Wednesday: the rest of the returning class. Now, the two returning guys who deserve their plaques post haste, especially the center fielder who killed the most runs of all. 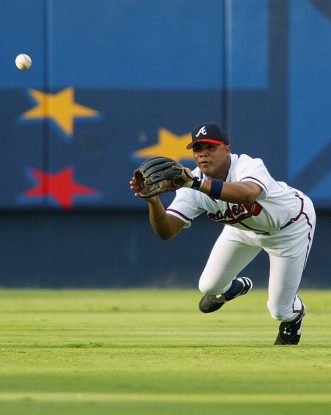 This is the single most run-preventive center fielder who ever played major league baseball. His name is Andruw Jones. His uniform front should have read Electrolux. He belongs in Cooperstown.

I’m pretty sure people still have a near-impossible time reconciling Jones’s too-staggering decline phase to his peak through age 29. It started with his final, injury-marred Atlanta season, and continued so profoundly in Los Angeles that he became indifferent enough to be a sad punch line before he was finally bought out of his deal.

But that peak should still be enough to make Jones a Hall of Famer.

He wasn’t just a Hall-level hitter before those later-career health issues. But he was way off the proverbial charts as a run-preventive center fielder. He had a great throwing arm, a genius for finding sure routes to balls despite his habitual shallow positioning, and both elevated him where it mattered the most—not just in the highlight reels, either, though he had more than enough of those.

Jones retired with the second-most defensive runs saved above his league average for any player at any position—only Hall of Fame third baseman Brooks Robinson’s +293 out-rank Jones’s +253. Jones is also +80 ahead of Hall of Famer Willie Mays among center  fielders, incidentally. Don’t be silly. I’m not calling Jones a better player than Mays, or even Hall of Famer Ken Griffey, Jr. They were just too much better all-around to kid yourself. (Baseball-Reference [via Jay Jaffe] ranks Jones number 11 among major league center fielders.)

I am saying, however, that taken strictly for his defense Jones was the most run-preventive defensive center fielder who ever played major league baseball. But Jones all-around at his peak was remarkable enough. For his twelve Atlanta seasons, my Real Batting Average metric (RBA: total bases + walks + intentional walks + sacrifice flies + hit by pitches, divided by total plate appearances) shows Jones’s peak value as more than worthy of a plaque:

His career value at the plate wasn’t damaged quite as much as you remember by that terrible post-Atlanta decline phase, either. In fact, his career RBA is a) only nine points lower than his peak; and, b) higher than three other Hall center fielders who played in the post-World War II/post-integration/night-ball era:

Measure him by wins above replacement-level player (WAR), and Jones’s seven-year peak WAR is above that of the average Hall of Fame center fielder. There are plenty of mostly or solely peak-value Hall of Famers in Cooperstown; they only begin with Dizzy Dean and Sandy Koufax.

Jones’s Hall of Fame teammate, Chipper Jones, wasn’t just blowing smoke when he said upon his own induction that if you wanted to beat the 1996-2007 Braves “you had to go through the Jones boys, too.” That’s the way Hall of Famers play the game. And if the Hall now gives more value to defense than in the past, Jones assuredly deserves the honour even more. 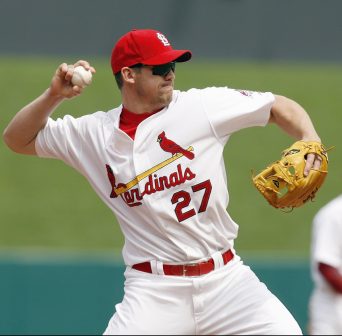 This is a Hall of Fame third baseman. His name is Scott Rolen. He shouldn’t have to wait for an Era Committee to enshrine him.

Once more, with ten times the feeling: It wasn’t Rolen’s fault that he was villified and sullied during his early seasons in Philadelphia. He just wasn’t the kind of guy the Phillies’ front office of the time loved, influenced heavily enough by the like of Loud Larry Bowa and Drill Sgt. Dallas Green.

Rolen was soft spoken, he let his prep and his play do his talking, and he didn’t blow up the nearest inanimate objects when a swing missed or a play faltered or a game was lost. You hear a lot of lip service to let’s just get ’em tomorrow. Rolen lived it. If he’d been a fighter pilot, Rolen would have earned a rep as the classic maintain-an-even-strain type. The Right Stuff.

That front office misread Rolen as indifferent, if not unrealistic. (Rolen went into his walk year in 2002 unsatisfied that the Phillies then were committed to building a consistently-winning team and spurned a $140 million offer because he wasn’t convinced of it.) Even if every teammate he had knew better. He hustled himself into injuries and that only added to the sullying, in Philadelphia and in St. Louis, where he ran afoul of Tony La Russa despite playing his usual kind of hard and delivering performances that helped the Cardinals to a few postseasons and a World Series ring.

Rolen fumed over La Russa souring on him for being injured in honest competition. If only he could have then-Brewers manager Ned Yost for a skipper. Yost called him “the perfect baseball player. It’s his tenacity, his preparation, the way he plays. He tries to do everything fundamentally sound. And he puts the team first—there’s no fanfare with him.”

Then-Cardinals GM John Mozeliak came publicly to regret trading Rolen to the Blue Jays. Former Cardinals GM Walt Jocketty caught wind that Rolen wanted to play closer to home   and pried him out of the Jays for the Reds. Rolen helped the Reds to a couple of postseasons, too.

Rolen wasn’t the hitter Hall of Fame third baseman Chipper Jones was, but Jones wasn’t the defender Rolen was, either. Not by about ten country miles. Rolen won eight Gold Gloves and they weren’t by reputation alone. Only Robinson and Hall of Famer Mike Schmidt have more such awards at third base.

Rolen had eleven seasons averaging ten or more runs saved at third and three in which he averaged twenty or more. His 140 defensive runs above league average are tied for sixth among third basemen all time. Preferring to leave it on the field and at the plate without starving for publicity or acting like the star he did his best not to present himself being may have been Rolen’s number one career problem.

But would you believe that Rolen is ahead of five postwar/post-integration/night-ball Hall of Fame third basemen at the plate, according to RBA? That those he passes include George Brett? See for yourself:

Baseball-Reference (via Jay Jaffe) rates Rolen the number ten third baseman ever. His Hall candidacy gets more traction year by year. (He shot through the 60 percent line last year, in fact.) He deserves a plaque in Cooperstown, and he shouldn’t have to wait for an Era Committee to get it.

Note: Some of the foregoing has been published previously.