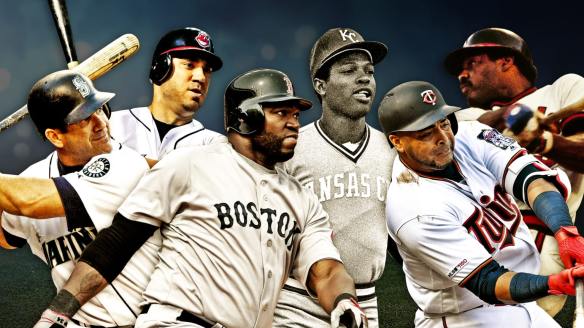 The DH is neither the end of the world nor restricted to the big bombers alone. (Left to right: Hall of Famer Edgar Martinez, Travis Hafner, Hall of Famer David Ortiz, Hal McRae, Nelson Cruz, Don Baylor.)

It’s not that I expected universal acclaim over the coming of the universal designated hitter.  But some of the arguments you see against it continue to jam traffic across the bridge from the merely ridiculous to the patent nonsense. Presented for your consideration, this jewel, from social media: “been coaching baseball for 35+ years the DH has created prima donna pitchers who have no clue how to hit and change the strategy of the game since pitchers don’t have to bat [sic] they have no issue throwing a McRib!”

Suppose I told you there was a decade in which there were 7,923 hit batsmen, an average  792 per season, across the majors? That decade would be 1901-1910. Since the Show then included a mere sixteen teams, it means each team averaged 495 men hit by pitches over the decade and about 50 plunked per season. Let’s look now at the past ten seasons, shall we?

For that decade, there were 16,537 hit batsmen. Seems like a drilling epidemic at first glance, right? But remember that the Show has had thirty teams since just before the turn of the century. Now it looks different. It means an average 264 men per team hit by pitches over the decade and an average 26 a team plunked per season. That tells me that, for assorted reasons, not the least of which might be formal, official crackdowns on throwing at batters, pitchers in our century have a lot more issues against throwing McRibs, Sledge-o-Matic sliders, Conehead curve balls, and faceplant fastballs than pitchers in the pre-designated hitter era did.

As a matter of fact, during Season One B.D.H. (Before Designated Hitter) the American League’s pitchers hit only seven fewer batters than in Season One A.D.H. (Arrival of Designated Hitter.) I’m not entirely convinced you can make a case for that badly heightened a headhunting spree off that. “As the [twentieth] century wore on,” wrote Peter Morris in A Game of Inches: The Story Behind the Innovations That Shaped Baseball, which should be considered half of the game’s Bible (the other half is Baseball Reference, silly), “beanballs became increasingly unacceptable.”

This trend is often attributed to the fatal beaning of Cleveland shortstop Ray Chapman in 1920, and yet this conclusion is difficult to justify. Bill James has noted that hit batsmen declined steadily during the first two decades of the twentieth century, then actually increased briefly after the Chapman tragedy. Totals of hit batsmen again dropped steadily from the mid-1920s until the mid-1940s, then increased dramatically over the next two decades, before beginning to drop in 1968.

The causes of these tendencies are more difficult to determine, because no single reason predominated. Instead, a number of factors contributed, including changing interpretations of the strike zone, new approaches by batters, and the introduction of the batting helmet.

The modern day record for hit batsmen by a pitcher in a single season is 32, held by Chick Fraser of the 1901 Philadelphia Athletics. On the career plunk list, Fraser (219) happens to be numero duo behind Gus Weyhing (277). Only three of the top ten all-time pitched after the dead-ball era, and only one of those (Hall of Famer Randy Johnson) was a power pitcher. The other two (Tim Wakefield, Charlie Hough) were knuckleball pitchers who usually got their plunks without malice aforethought, since the knuckleball isn’t exactly renowned for being simple to command or control.

As for the DH creating prima donna pitchers who have no clue how to hit, well, I hoped I wouldn’t have to repeat that from the end of the dead-ball era’s final decade through the end of last season, pitchers as a class have hit a glandular .162. As a class, pitchers never. could. hit. Unless you think a lineup full of .162 hitters is going to put a lot of runs on the scoreboard, that is. (They might if facing a defense of nine Dick [Dr. Strangeglove] Stuarts only.) Those who could were (and remain) outliers.

But our gobbledegookworm goes further:

Managing with a DH most any idiot can do this put your best [eight] out in the field your best nine up to bat and get your bullpen ready I don’t have to burn players I don’t have to SacBunt, I don’t actually have to play baseball.

Pay attention, class. The foregoing does not mean I want to see the bunt go entirely to the extinction for which we should pray go cancer, COVID, the federal debt, and the ballpoint pen. In fact, if I were a baseball manager, I’d deploy the bunt in the following situations:

If I have the next Brett Butler on my team. That comparatively pint-sized center fielder loved to bunt and hated to waste outs. (George F. Will once called Butler the Human Bunt, in fact.) Butler dropped 337 bunts in his long major league career, and only fifteen percent of them involved sacrifices. You read right: 85 percent of Butler’s bunts were dropped to become base hits. (In 1992, Butler had 171 hits, 42 of which were bunts.)

If I see the opposition infield positioned in one of those overweighted-to-one-side defensive shifts. And I wouldn’t even care if the other guys’ pitcher has a no-hitter in the making, either. (Let the other guys explain why they thought it was smart to protect their man’s no-hit bid by handing my batter free territory.) Show me all that delicious free real estate to work with on one side of the infield, I’m going to show you my man on first base on the house. I’m even going to blow him to a filet mignon dinner with all the trimmings, if he waits for a pitch on the outside and just bunts or taps it onto that frontier. Because my man’s playing smarter baseball than you, and he won’t be wasting one-third of my inning’s resources playing it.

Just the way my DH won’t be the big bomber alone. The slot can do wonders for bombers who can still bomb but from whom age is robbing their fielding mobility. But I can also use the DH slot to give my regulars a little breather from their defensive toil often enough to have them fresh for a stretch drive. I can use the slot to give valuable plate appearances to those on my bench who aren’t quite yet ready to be regulars but who can swing the bat with authority, anyway.

I can even use the slot to decide whether I’d like the number nine lineup berth to be filled by a second cleanup-type hitter or a second leadoff-type hitter.

But I’ll no longer have to agonise over watching the other guys pitch around my good-enough number eight batter so he can strike my pool noodle-swinging pitcher out ending my inning with a duck or three stranded on the pond. I won’t have to agonise over whether to lift my effective pitcher for a pinch-hitter when he might give me another couple of innings so I don’t have to open my bullpen too soon. And I won’t feel robbed of opportunities for “strategy,” either. I repeat: the smart managers—from John McGraw to Casey Stengel, from Whitey Herzog to Bruce Bochy—deployed about 95 percent of “strategy” before the game actually began.

Baseball’s problems are many enough. Making the DH universal at last, and sending the sacrifice bunt further toward oblivion, won’t be two of them.