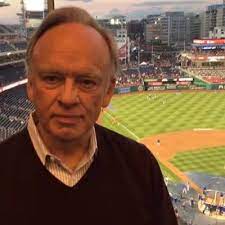 Should this man be baseball’s next commissioner—and none too soon?

Major league baseball’s lockout continues apace. So does the egg on commissioner Rob Manfred’s face, even if Manfred doesn’t acknowledge it.

Bad enough: Few involved in the lockout directly, and few observing it closely, comprehend what Steven Goldman, a Baseball Prospectus writer and (in Forging Genius) the most incisive analyst of Casey Stengel’s success as a Yankee manager, comprehends with little effort and lots of sense:

If one feels the owners have somehow been shortchanged by the players in the past or would be unfairly impacted by the players’ proposals, among them a shortening of the paths to arbitration and free agency, make an objective argument for why this is so. Similarly, if one believes the players do not currently receive their fair share of baseball’s revenues, then prove it as best one is able. Failing to do either is to admit to being a kneejerk partisan. Telling other people that they’re wrong and deserve less money than they’re asking for isn’t just something you can have an opinion on, like whether or not you like creamed spinach . . .

. . . As has been related here and elsewhere, the players’ share of revenue has been falling as owners emphasize younger players. The value of free agency has resultantly been diminished, and whereas some players are still cleaning up, there is an increasing number of players who don’t last long enough to escape Pittsburgh and get some of that sweet Dodgers swag. Simultaneously, not only do the owners not open their books to the players, many of them are clearly not trying. We know that without seeing the books because we as fans can see the teams, see the minimal payroll, note the revenue-sharing payments vanishing without a trace, not to mention the increasing amounts of online and non-baseball revenue that teams now collect. We have to be fair, but we don’t have to be stupid.

Worse: Major League Baseball-owned MLB Network’s summary dismissal of longtime baseball writer/television analyst Ken Rosenthal, over comparatively benign critiques of Manfred published elsewhere eighteen months earlier, has brought corresponding questions to a boil. None seems more glaring than the one asking not whether Manfred’s competent to continue, but whether baseball needs an entirely new way to choose his successors.

The owners hire a commissioner. They can fire him any old time they please, so long as they pay him over the remaining time for which his contract calls. But nobody else in the game has a vote on the hiring. This can and has created a few, shall we say, problems in the past. With the game in Manfred’s hands, it’s made those problems seem like brief if rude interruptions.

Manfred’s current contract expires in 2024. So long as the owners continue to believe he operates by the maxim that the good of the game equals making money for them, his job is safe. Never mind suppressing free agency’s cumulative value; never mind treating the play of the game as a perverse Rube Goldberg experiment to be bent toward the attention-and-thought-challenged; never mind monkeying around with basic equipment such as the baseballs themselves; never mind its owned-and-operated media franchise strong-arming a reporter daring to question Manfred’s competence.

The players have no say in choosing the game’s maximum steward and administrator. Neither do those who manage and coach them. Neither do those charged with keeping the games honest, the umpires, never mind that the umpires have their own issues that Manfred has proven distinctly disinterested in addressing too often. Hands up to everyone who thinks there’s something very wrong with that.

Very well, you holdouts. Allow me to ask you two questions I’ve raised or addressed in the past. 1) Do you buy tickets to baseball games for the distinct pleasure of seeing your team’s owner(s)? (You Yankee fans of the 1980s fed up with George Steinbrenner’s act and hoping to let him have it, sit down, you’re outliers.) 2) Do you believe the commissioner should quit trying to fix what isn’t broken but leave what is broken alone to fix itself?

If you answered no to both, good. Now, hear me out further.

There’s no valid reason on earth why the commissioner should be chosen among the owners alone. Imagine if the president of the United States could be elected solely by the nation’s state governors. That would be seen, rightly enough, as an abomination. Now, if you agree the presidency should be filled by the people acting through the electors chosen based upon the people’s votes, why would you agree that baseball’s commissioner should be chosen solely by the designated voters from thirty ownerships?

Major league baseball has not just thirty owners but approximately 1,200 players, based upon the 40-man rosters. It also has thirty managers overseeing their players and their coaching staffs, and 76 umpires spread among nineteen umpiring crews. There is no sensible reason anyone can exhume why voting for the commissioner shouldn’t include the player representatives for all thirty major league teams, their managers, and the nineteen chiefs representing their crews.

Perhaps, then, a commmissioner elected thus would be inclined better to see the complete picture and not just the portions that equal maximum revenues on which to base future owner shenanigans. And that provokes the next but just as critical question: from among whom should the game’s next commissioner be chosen?

Setting aside issues that may or may not have soiled those commissionerships, the deep record shows that only one of those pre-Selig-Manfred commissioners had little enough knowledge or even love of the game: The retired Air Force general (his hiring provoked a sportswriting wag to dub him the Unknown Soldier) played a very little baseball in his youth and was known otherwise to prefer squash, tennis, golf, polo and horse jumping.

The best you could say of him is that he hired the first African-American to hold a major job in the commissioner’s office. To his eternal credit, Eckert broke the colour line in baseball’s administration when he hired Hall of Famer Monte Irvin as assistant director of public relations and promotion operations. Eckert’s successor Kuhn put Irvin in full charge of it, a job Irvin did until he resigned when Kuhn did in 1984.

Since it’s not unprecedented to have a sportswriter/broadcaster become baseball’s commissioner when he grew up, never mind his inability a) to shake the presence of the man (Babe Ruth) for whom he once ghost-wrote or b) to act decisively as commissioner unless it threatened a) (Ford Frick might as well have been nicknamed “It’s a League Matter”), I can think of a very solid candidate.

No, silly, not Bob Costas, whom two-thirds of the world (including me, once upon a time) thought as strongly that he should have the job as Costas thought he shouldn’t, often vociferously. But the candidate I have in mind is a retired longtime baseball writer of impeccable talent, established insight, and genuine love of the game. (Why he hasn’t been elected to the writers’ wing of the Hall of Fame remains a mystery to me, too.)

He has a concurrent love for golf but is not otherwise sinister. He is known to have walked a very even line between the self-imploding fooleries of the owners and the sometimes self-defeating strategems of the players. He has been known to suffer neither fools nor malcompetent umpires gladly. His knowledge and love of the game is rivaled only by that of the commissioner least apologetic about expressing it ostentatiously if lyrically, the ill-fated Giamatti.

There are five books collecting his best work to present as evidence so far; God and an insightful publishing house willing, there’ll come a sixth. Commissioner Thomas Boswell, anyone?