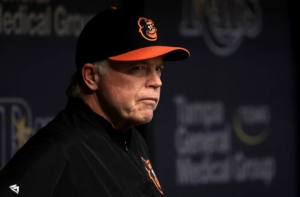 Showalter still has some splainin’ to do over Zack Britton’s absence when the 2016 AL wild card game was squarely on the line . . .

If you want to keep your minds off the lockout for awhile, you can find plenty of issues with which to do that. One coming to mind almost at once is New York Post columnist Mike Vaccaro waxing, as his column’s headline said Friday, on why the Mets should hire Buck Showalter as their next manager.

“The truth is,” Vaccaro wrote, “the team [new general manager Billy] Eppler and [owner Steve] Cohen have already cobbled together — and the one that seems destined to emerge from the lockout — is a team custom-designed for Showalter’s particular talents.”

There will be plenty of veterans, and Showalter likes having vets he can trust in his clubhouse. There will be plenty of intriguing players of younger vintage—think Pete Alonso, Jeff McNeil, Brandon Nimmo—whose experiences as major leaguers have largely been shaped by the stone hands of [former manager] Mickey Callaway and the inexperienced ones of [former manager Luis] Rojas . . .

But Showalter’s teams, in addition to almost always being of a superior collective baseball IQ, also take care of their business properly . . . The Mets, under Showalter, would be a Showalter team. That may mean they’re a couple of degrees less flamboyant, maybe a few layers less fun-loving . . .

So far, so good. And Showalter’s supporters include his former Orioles outfielder Adam Jones, who acknowledged Showalter still has to go through “the process,” meaning proper vetting. “[F]olks don’t have any idea of the real impact he can make on a ball club,” Jones tweeted Friday. “And I’m not just talking players. The Franchise. He made everyone better and accountable!”

How about Showalter making Showalter himself accountable? Say, for not making the move he should have made in the bottom of the eleventh of the 2016 wild card game? Vaccaro’s Post colleague Steve Serby tried in a September 2020 interview. And Showalter failed.

“Your Orioles controversy in [that game] when you didn’t call on Zack Britton and lost in the bottom of the eleventh in Toronto,” Serby presented. “You just have to wear some things, and I can sit here and tell you ten things you may not know about that situation, but nobody wants to hear it. I’m at peace with that,” Showalter replied.

The obvious followup—In fact, Buck, people would love to hear about the ten things that stopped you from bringing in your best relief pitcher, who also happened to be the best reliever in baseball that season, despite there not being a quote save situation, unquote, despite the Blue Jays with first and third and one out in a tie ballgame—didn’t come from Serby’s mouth.

Showalter stayed with Ubaldo Jimenez, normally a starter, but working in relief of Brian Dueseng, after Dueseng opened the inning with a strikeout . . . and despite Jimenez’s prompt surrender of a pair of base hits on four pitches. And Edwin Encarnacion hit Jimenez’s first pitch to him for a three-run homer.

It wasn’t as though Showalter didn’t have a very recent precedent by which to go. Just two years earlier, then-Cardinals manager Mike Matheny made the same mistake—with his Cardinals one game from elimination, Matheny left his best relief option, Trevor Rosenthal, in the bullpen in the bottom of the ninth of a tie game . . . because that, too, wasn’t a quote save situation unquote.

The Giants then had first and second and also one out. Matheny left in Michael Wacha, still rusty from late-season injury idling. And Travis Ishikawa hit Wacha’s second pitch to him for a three-run homer. Showalter was luckier—Encarnacion’s blast into the second deck merely sent the Jays to a division series; Ishikawa’s launch to the top of Levi’s Landing had a National League pennant attached to it.

Matheny reminded everyone what Showalter would forget a mere two years later: the time to bring your absolute best relief pitcher into a game is when it’s squarely on the line, previously designated “role” be damned. Especially when postseason advancement or a trip to the World Series depends on it. That’s not purely a thought from the school of analytics. It’s what they taught in Common Sense Elementary School.

If the Mets take Vaccaro’s suggestion seriously, they should be mindful of Jones’s reminder to put Showalter through the full vetting process. That vetting must include Showalter telling them, at least, what he wouldn’t deign to tell Serby over a year ago.

The Mets should damn well want to know why else—beyond no “save situation”—Showalter left his best relief option to rot when that option just might have sent the game to a twelfth inning giving his team one more chance to win at minumum. Accountability neither begins nor ends with the players.

If Showalter says only and again that nobody wants to hear those ten things you may not know about that situation, the one that sent his team home for a winter too soon, the Mets’ proper reply should be, “Way wrong answer! Thanks for coming, Buck, and don’t let the door knob goose you on your way out.”