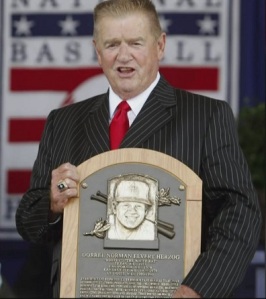 Whitey Herzog, inducted into the Hall of Fame as a manager in 2010: “The state of the game is about as bad as I’ve ever seen it,” says the man whose baseball life began as a tenacious outfielder and student of the game.

Perhaps if Whitey Herzog were about three decades younger than he is now, you might think he’s casting his retired eyes upon Rob Manfred’s job. Talking to the St. Louis Post-Dispatch‘s Rick Hummel, you’d almost think the Hall of Fame manager wishes he could turn the proverbial clock back and let someone post his name for the job. Almost.

“The state of the game in baseball,” says the White Rat, who turns 90 today, “is about as bad as I’ve ever seen it. It’s all strikeouts and home runs and a high number of pitches.” Well.

Herzog stands on stronger ground over pitch volume than he does over home runs. In 2021 games averaged 146 pitches per; in 2019, 151. On the other hand, both seasons averaged four pitches per plate appearance. And, in 2021 and 2019, batters made contact on 74 percent of the pitches they saw.

A season that’s part of an era still glorified by certain old fans, with almost half as many major league teams as today, had only three percent less singles than twice that many teams playing in 2021. Forget percentages, do you want to see raw numbers?

Pitch totals for 1960 aren’t available, so we don’t know for dead last certain the percentage of pitches on which 1960 batters made contact. From the look of the raw numbers above the triple does seem to have collapsed. (Only twelve triples more this year than 61 years ago?) But 1960 batters struck out in 14 percent of their plate appearances, while 2021 batters struck out in (wait for it!) 23 percent of their plate appearances.

Herzog really starts winding up with Hummel when he strikes at Manfred’s purported game-shortening experiments. “He keeps talking about the three-batter rule for [relief] pitchers. Stupid,” he says. “And then the tenth inning rule [the free cookie on second to open each extra half-inning]. Stupid. Seven-inning doubleheaders. Stupid. None of that is going to shorten the games at all, until we can lower the amount of pitches that they throw.”

The White Rat is dead right about the three-batter relief pitchers’ minimum and the free cookie on second to start each extra half-inning. The latter was dropped during this year’s postseason, thankfully, but the former wasn’t. But the seven-inning doubleheader has a benefit critics and supporters alike tend to miss—the season is long enough without compounding players’ wear and tear and injury risks.

Something noticeable under the three-batter minimum was a lot of managers leaving a reliever in after facing his minimum third batter but getting battered before or after that third minimum batter. It’s worth reminding ourselves that relief pitchers have already been pitching in the bullpens before they get into the game in the first place.

The White Rat, in the Cardinals dugout during a 1980s game: “[We’re not] going to shorten the games at all until we can lower the amount of pitches that they throw.”

Herzog, you may or may not remember, is the manager who once wrote, “The good skipper does his managing before the game starts. The guy you see out there managing is the one who’s screwing up the arms.” He’s the manager who once ran his bullpens according to a strict rule: if he warmed a pitcher up more than once but didn’t bring him in after the second warmup, the man had the rest of the day or night off.

This is the same manager who [in his memoir/critique, You’re Missin’ a Great Game] criticised two men he liked, Tommy Lasorda and Pete Rose, for misusing their bullpens by warming, sitting, warming, sitting, then bringing in relievers who’d already been gassed enough by the time they got into the game—and got murdered on the mound.

Some managers think if a guy’s not actually in a game, he’s not pitching. But if he’s tossing on the sidelines, man, he’s getting hot. Over the years I dealt some of my pitchers to [the Dodgers] . . . and they always came back with the same report: Tommy was still messing up the pen . . .

Pete Rose was like Tommy. Wonderful baseball man, but he was impaired when it came to handling pitchers. Here he had three world-class relievers, Norm Charlton, Rob Murphy, and Rob Dibble, all in the same pen . . . With those three guys on your side, you shouldn’t lose games after the sixth. But Pete found a way.

He’d get Murphy up in the third; he’d warm him up in the fourth. Then he’d sit him down. He’d get Charlton up in the fifth. Sometimes I’d look down there and he’d have both lefthanders going at the same time. Why would you warm ’em both up at once? You’re only going to use one lefty or the other! Then, after he’d worked ’em out three or four times, Pete would put one in the game and be surprised he had no zip. “He can’t be tired,” he’d say. “He ain’t pitched in three days!” Somebody counted how many times he warmed Murphy up one year, and it was over two hundred. I like Pete, boy—but I loved managing against him.

It’s worth listening to Herzog, then, when he tells Hummel that none of Manfred’s gimmickry is going to shorten a thing until managers can reduce the pitch volume. In 2021, batters faced an average just a sliver under four pitches per plate appearance. It comes out to 709,842 pitches for 182,128 plate appearances all regular season long.

“I watch every game at home,” the White Rat says. “I generally don’t go to bed until 11 at night when I’m watching the West Coast games and when the teams throw 340 to 360 pitches every night, there’s no way you can shorten the games. I sit and watch an 0-2 pitch — a perfect pitch on the black — (the umpires) never ring anybody up. It’s always a ball.”

Herzog may have exaggerated the number slightly (there were more like 292 pitchers per game on average, covering both sides of a game), but he makes a pretty point. Especially if he’s absolutely right about the umpires, most of whom still have their “own” strike zones, not calling the rule book strike zone, compelling hitters and pitchers alike to think in the terms that once alarmed Sandy Alderson, when he was MLB’s vice president of baseball operations in 1999.

The old Major League Umpires Association fumed (and ultimately imploded) in 1999, over MLB’s then-intention to hold umps to account over strike zone distinctions. When their then-leader Richie Phillips snarked that umpires should be compared to federal judges, Alderson snarked right back. “Federal judges can be impeached,” he said. “I got worried when I found out that players were more concerned with who was umpiring the next day than they were about who was pitching.”

In 2021, pitchers threw 453,466 strikes. Those resulted in 42,145 strikeouts. Remember—that’s 23 percent of 2021 plate appearances ending in strikeouts. But how many of those strikes were called when the pitch actually traversed the plate outside, under, or above the real strike zone?

Herzog is on board with analytics to a particular extent. You should expect that of a man who believes the good manager does his managing before the game begins. “Analytics are a wonderful thing–up to a point,” says the Rat. ” . . . [T]here are a lot more things that go into managing a baseball game than analytics. The people who sit up in the office don’t make out the lineup, but they tell you which eight players should be playing. But they don’t know if a guy’s sick or got a hangover or having marital problems.”

Or, if a guy might be playing through an injury while actually making things worse for himself and his team. Baseball history is littered with players playing hurt and managers plus front offices pressuring them back before injuries are healed properly and fully. Leo Durocher, to name one notoriously, had a penchant for ripping the injured as quitters. Too many fans even today think injuries equal quitting.

Alex Bregman’s near-complete absence at the plate during the Astros’ run to the World Series was much remarked. The righthanded-hitting third baseman underwent right wrist surgery Monday, having dealt with the issue since September to crown an injury/illness-disrupted season. (A quad injury took him out for the first two months.)

Just how much did Bregman trying to play and hit through the wrist issue hurt the Astros’ Series hopes? Being a “gamer” is one thing, but you can and too often do hurt your team more than help when you’re playing with and through an injury that you can and often do make much worse for your trouble.

Bregman played excellent postseason third base defense, mostly. But he looked as lost as the treasure of the Incas at the plate. His backup Aledmys Diaz is a capable defender at third (he was worth six defensive runs above the American League average when he played the position), hit capably when batting third or sixth in the lineup this season, and hit .342 with men in scoring position on the season.

The Astros’ World Series undoing came in significant part because they had a sudden penchant for leaving men on base, and in part because the champion Braves plain out-pitched them when it mattered most.

They might have seen a few different results with Diaz stepping in for Bregman, though. It might not have made the difference overall, and certainly Astro fans would have preferred to see Bregman at his customary stand. But maybe the Astros wouldn’t have gone down by being shut out in Game Six, either. They might even have gotten to play a Game Seven instead of watching the Braves celebrate in their house. Might.