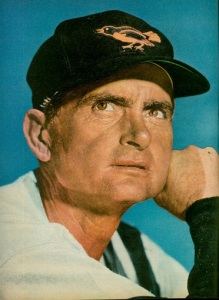 Take a prowl through baseball history and you discover a good volume of significant events on 11 September over the decades before the atrocities at the World Trade Center and the Pentagon in 2001. They only began with a fellow making his major league premiere, behind the dish, for a very different team of Washington Nationals—in 1886. A fellow named Connie Mack.

Twenty years later, on the same date, Hall of Fame pitcher Christy Mathewson shut out the Boston Beaneaters. (You know them today as the Atlanta Braves.) Big deal, you say? The game featured the final appearance of another Hall of Famer, John McGraw—as a player.

On 11 September 1918, the Red Sox won the World Series behind Carl Mays’s 2-1 three-hitter. It would be the last World Series the Olde Towne Team would win until the turn of the 21st Century, of course. A remarkable literature likening baseball to Greek tragedy would emerge over the following decades thanks to assorted surreal Red Sox calamties.

On the same date in 1923, six years before he became the surprise Game One starter in the World Series (and set the Series single-game strikeout record Carl Erskine would break), Howard Ehmke—then with the Red Sox—pitched a perfect game . . . after Yankee center fielder Whitey Witt led the game off with an infield grounder booted by Red Sox third baseman Howie Shanks—but ruled a hit by official scorer Fred Lieb.

Ehmke retired all 27 men he faced from there. Lieb eventually became the last charter member of the Baseball Writers Association of America to pass to the Elysian Fields, in 1980. His fellow BBWAA founding fathers included Damon Runyon, whose baseball writings you can still read thanks to the splendid anthology Guys, Dolls, and Curveballs.

11 September should have been a date revered in baseball history as a whole and in St. Louis in particular—on that date in 1932, the Cardinals signed Branch Rickey to a five-year deal as their general manager. Rickey only went on to refine the farm system as we once came to know it before leaving St. Louis for Brooklyn—where he’d go forth to break the disgraceful colour line by way of signing Jackie Robinson.

On the same date in 1946, the Dodgers and the Reds played baseball’s longest scoreless tie—nineteen innings, in Ebbets Field, with Johnny (Double No-Hit) Vander Meer pitching fifteen innings and striking fourteen out. One year to the day later, a Pirates sophomore hit three home runs in three straight plate appearances, including twice in the ninth inning—and his team lost the game anyway. You may have heard of him: Hall of Famer Ralph Kiner.

Paul Richards, then the Orioles manager, picked 11 September 1958 to try a little creative gamesmanship. Baseball-Reference‘s “Bullpen” section says it was a hope for a scoring chance in the first inning against the Kansas City Athletics. The trick: placing three pitchers in the starting lineup—one (Jack Harshman) listed in center field batting fifth, a second (Milt Pappas) at second base batting seventh, and the game’s actual starting pitcher (Billy O’Dell) batting ninth.

There went that idea. All three pitchers took a collective .151 hitting average into the game. Just how Richards thought that was supposed to help him score first-inning runs eludes even now. Here’s how that top of the first went for him:

Future Hall of Fame manager Dick Williams—leadoff single.
Bob Boyd—Watched Williams take second on a passed ball, then popped out foul to the third baseman.
Willie Tasby—popped out foul to the first baseman.
Bob Neiman—walked intentionally by A’s starter Ned Garver to get to the next man up: Harshman, the pitching second baseman.
Former Yankee Gene Woodling pinch hit for Harshman—and flied out to right.

Richards promptly removed Pappas from the game. The Orioles scored the game’s first run—in the third inning. The A’s tied with a run in the fourth, took the lead with a run in the fifth, then buried the Orioles with a five-run eighth highlighted by once and future Yankee Bob Cerv’s three-run homer. The Wizaed of Waxahachie didn’t lack for forward thinking, but that time his actual or alleged genius escaped him.

Exactly one year later, Pirates relief pitcher Elroy Face’s 22-game “winning” streak—five to finish 1958; seventeen to that point in 1959—came to a dead stop courtesy of the Dodgers. The problems with Face’s feat, as Mudville Analytics reminds us, were three:1)  He entered a lot of tie games and pitched well until his team got him the runs to win. 2) He  blew several saves (applied retroactively) and gave himself opportunities to win that he shouldn’t have had. (In 1959, Face only converted 53 percent of his retroactively-applied save opportunities, the save not becoming official until after Face retired.) 3) He tended to average about three runs of offensive support per outing while he was in the games.

11 September 1966 was a record-breaking day for a Yankee named John Miller: he became the first Yankee ever to hit one out in his first major league plate appearance. Three years later, Miller hit one out in his last major league plate appearance, too. On the same day Miller entered the Yankee record book, a Braves pitcher, Pat Jarvis, became the first-ever strikeout victim of a kid pitching for the Mets. A kid named Nolan Ryan. 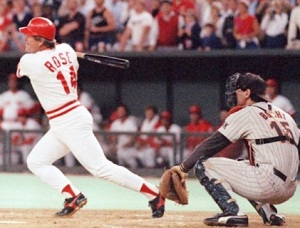 Charlie Hustler got what he loved to call the Big Knock on 11 September 1985. (That’s future three-time World Series-winning manager Bruce Bochy behind the plate, too.)

Some other 11 September gems:

1972—Should-be Hall of Famer Dick Allen set a new White Sox record for single-season home runs when he hits his 34th—providing the only two runs the White Sox needed to beat the Royals.

1972—The Mets and the Cardinals played a 25-inning night game lost by the Mets, but the Mets became the only team in Show history to send 103 batters to the plate. (The Cardinals missed the century mark there by one.)

1976—Should-also-be-Hall of Famer Minnie Minoso goes 0-for-3 against Angels lefthander Frank (The Top) Tanana . . . but it enabled Minoso to play major league baseball in part of a fourth decade, twelve years after his previous appearance.

1980—Ron LeFlore (with his 91st) and Rodney Scott (his 58th) of the Montreal Expos broke the single-season record for stolen bases by teammates, a record held previously by Hall of Famer Lou Brock and Bake McBride of the 1974 Cardinals. Who says crime doesn’t pay?

1987—Howard Johnson became the Show’s eighth 30-30 man when he stole second after a leadoff single off the Cardinals’ John Tudor in the bottom of the fourth. Well, sometimes crime doesn’t pay: Johnson was forced out at third to end the inning, and the Mets went on to lose, 6-4 in ten innings.

1998—The then-Florida Marlins’s fire-sold collapse became complete: they went from World Series winners in 1997 to 100-game losers on this day.

Thus a good run of baseball’s big, not-so-big, and surreal 11 September events prior to the atrocity two decades ago tomorrow that helped change America—and ended the lives of four former minor league players: Marty Boryczewski, Mark Hindy, Mike Weinberg, and Brent Woodall died in the attacks. This column is dedicated to their memory.