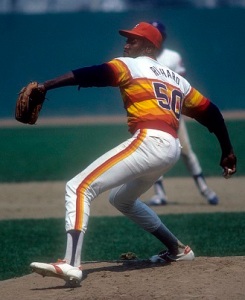 It was easier to square off against a Boeing 747 than to face J.R. Richard at his peak.

You couldn’t resist wondering when you saw him at his peak. Suppose 6’8″ James Rodney Richard’s career began early enough to give him a shot at pitching to 6’8″ Frank Howard. Paul Bunyan at the plate versus the Leaning Tower of Houston on the mound. Accompanying music, John Coltrane’s classic “Giant Steps.”

There might have been one of two outcomes. Either Howard was going to hit Richard for a home run making first contact with the Delta Quadrant, or Richard was going to bust three strikes through Howard as casually as the Lou’siana fisherman Richard loved to be on his free time.

“(I)f you beat me,” J.R. Richard said in 2012, remembering his attitude on the mound, “I’m gonna die trying. I was willing to give my life for it.” He damn near gave his life for it.

What National League hitters couldn’t do once Richard finally harnessed his outsize ability, a stroke did, while he was on the disabled list after he’d started the 1980 All-Star Game by striking out three American League batters including Hall of Famers Reggie Jackson and Carlton Fisk.

Not even renowned surgeon Dr. Frank Jobe could pinpoint the sources, after Richard visited him complaining of numbness in his fingers and ringing in his ears. Jobe and other doctors discovered obstructions in his arm and neck arteries—but decided they weren’t serious enough for surgery.

With the Astros on the road Richard gave himself a private workout at the Astrodome on 30 July 1980—and collapsed. The CAT scans to follow showed he’d actually suffered three strokes and also had thoracic outlet syndrome present thanks to his over-developed shoulder muscles. The strokes left his left side useless long enough.

Richard recovered enough to attempt a career comeback or two but it was futile. Now-retired Washington Post writer Thomas Boswell caught up to him during one of those comeback bids. “Richard is more pleasant, more outgoing, more generous with other people than ever before in his life,” Boswell observed.

Once he was the most forbidding Astro. Now he may be the least, signing autographs and seeking out chitchat. After a lifetime as the Goliath overdog, he is now everybody’s underdog, and he enjoys it. Richard may even have become the symbol of a decent, long-out-of-fashion idea: mutual tolerance.

““(W)hen people don’t understand who you are, when people can’t control you,” Richard told radio interviewer Bill Littlefield in 2015, promoting his memoir Still Throwing Heat, “they have a tendency to want to destroy you. But see, you got to realize this: Sports is a business. Nothing more or nothing less.”

Richard had signed a four-year, $3.2 million contract with the Astros the year before the trio of stroke took him down. His career ended for keeps in 1984 and he returned to his native Louisiana. He spent lots of time between there and Galveston fishing as if his life depended on it. He won a $1.2 million malpractise action against the Astros’ medical staff. He sold cars and recreational vehicles for a spell or two.

But then Richard, unlike his television namesake J.R. Ewing, discovered he had as much ability to navigate the oil business as hitters once had navigating his cruise-missile fastballs and his sweeping sliders. He lost $300,000 in what turned out an oil investment scam. Then he lost over $600,000 in his first divorce.

That led to a series of further business problems, a second failed marriage, and the loss of his home, finally bringing Richard so low that he lived homeless under a Houston bridge—until former teammates Jimmy (The Toy Cannon) Wynn and Bob Watson intervened.

Wynn called Watson, then the Astros’ general manager, some time in 1994. They reached out to the Baseball Assistance Team and together helped Richard back onto his feet. So did Richard’s church minister, Rev. Floyd Lewis, helping him stay on his feet and become a minister himself. 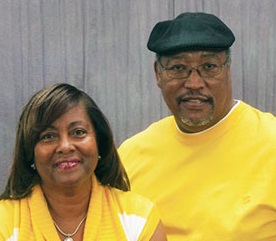 Richard with his wife, Lula: “My life is now better than ever because of the love of my life.”

He drew on his own homeless experience to help the homeless in particular, when not working with Houston donors to set up assorted children’s baseball programs where he’d teach the kids the game and a few hard-earned lessons of life, too.

“You see,” Richard told Littlefield, “a man could eat a whole whale, but it takes one bite at a time. Or he can walk a mile, but it takes one step at a time. So if you’re willing to take that step, [God] will make a way out of no way. See, God is the only one I know who can take a mess, go in a mess, clean up a mess and come back out and don’t be messy. Now you figure that out.”

Health and fate made that harder to figure out than he figured out how to strike fifteen Giants out in his first major league start—tying the rookie record set by Dodger legend Karl Spooner in 1954—or how to smash Hall of Famer Tom Seaver’s single-season National League record for righthanded pitchers.

Richard figured it out enough, too, to remarry happily. He met his third wife, Lula, when they shared a bus on a church trip. Maybe a little impulsively, Richard wrote his telephone number inside the cover of Lula’s Bible, and shared a steak dinner for their first date. They “courted” (Richard’s word) two years before marrying in 2010.

“She helped with a lot of stability, in every way,” Richard once said of her.

The man who once said he was the only man in baseball who could throw a ball through a car wash without the ball getting wet never lost his laconic wit, either, no matter what. Fans meeting him in later years and remembering their shock over his strokes often drew such replies as, “I couldn’t believe it, either.”

The Astros inducted Richard into the team’s Hall of Fame two years ago. They haven’t yet conferred the one thing Richard wanted most dearly when all was said and done, retiring his uniform number 50.

Nobody could believe what might have been the oddest game of Richard’s career. On 19 September 1978—the night he broke Seaver’s record—his mound opponent was Jim Bouton, Ball Four author, one-time Astro, attempting a quixotic comeback with the Braves. “The young flamethrower and the old junkballer,” Bouton described the matchup. Others called it David vs. Goliath.

It wasn’t half as impressive as the battle Richard won after his career, the battle of life, after the kind of buffetings that would send lesser men into the Phantom Zone of walking death. May his beloved Lula, his family, all those who loved him for himself and respected his self resurrection, take comfort that the Lord in whom he devoutly believed welcomes him home with gentleness and kindness.

And, maybe, with a gentle joke Richard himself would appreciate—“About that car wash, J.R. . . . “