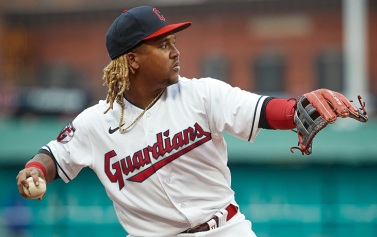 Cleveland’s Hope Memorial Bridge is named for stonemason William Henry Hope. He helped to build the Guardians of Traffic sculptures into the pylon columns at either end of the bridge that marries Lorain Avenue (west side) and Carnegie Avenue (east side). He helped build all eight such statues around the city.

He was also the father of comedy legend Bob Hope, once a partial owner of the Indians.

The bridge born as the Lorain-Carnegie Bridge was renamed for the elder Hope—and listed in the National Register of Historic Places—after local engineer Albert Porter threatened but failed to get the pylons and guardian statues removed as “monstrosities . . . we’re not running a May Show here.”

Naturally, the social media swarms who think they know an awful lot more than what actually do know were unamused to learn that the Indians—wrestling with the name change several years, from almost the moment they decided Chief Wahoo needed to go—decided to rename themselves the Guardians starting in the 2022 season.

They’re keeping the team colours. The Cleveland Plain-Dealer published a rendering of Indians third baseman Jose Ramirez as a Guardian. The new look is not unattractive. Neither is the new logo of a baseball with the stylised G on the meat of the ball and a wing flapping from the rear.

With exceptions you could fit in your living room, or maybe even in the Indians dugout, the swarms couldn’t figure out exactly what “guardians” had to do with Cleveland. It’s to wonder what they thought when they finally accepted that “guardians” have a singular meaning that isn’t confined to just the two on either end of the bridge leading traffic past Progressive Field.

Some of the swarms agonised that the team hadn’t renamed themselves the Spiders, as a different, ancient Cleveland franchise once did. Well, now. The Spiders existed in the National League from 1887 through 1899. Their franchise record: 827 wins, 938 losses. The Indians have been star-crossed quite enough without being renamed for a team that never won a single pennant. (And, for a team whose record in its final NL season was—wait for it!—20-134.)

Others thought the renaming should be after the Cleveland Buckeyes, who played in the Negro American League from 1942-1950. That might have been more plausible, not just to honour Cleveland’s entry into the game that is now recognised (long overdue, and by everyone except either recalcitrant racists or witless purists) as part of major league baseball. The Buckeyes played two Negro Leagues World Series and won one. (They beat the legendary Homestead Grays in the 1945 set.) If you must rename your team for another old, defunct team, best to rename it for a winner.

Still others thought the new name should be the Cleveland Rockers, tipping the beak toward the Rock and Roll Hall of Fame which is in Cleveland. (A song by rock and roll legend Ian Hunter, “Cleveland Rocks,” was the theme song of television’s The Drew Carey Show.) There were also those who thought the Colorado Rockies might have had an issue or three with that. But never mind.

Enough of the swarm thought the team’s introductory video for the new name had little enough business being narrated by Tom Hanks. Never mind that Hanks once featured in the baseball film hit A League of Their Own. Never mind, too, that Hanks started his acting career in Cleveland in the first place and has a particular affinity for the city.

“Cleveland natives are very defensive of their city,” writes Jim Swift of The Bulwark. “While I may have preferred the Indians, I will gladly be a Guardian against posers like [Senator] Ted Cruz, [National Review editor] Rich Lowry, [and former president] Donald Trump (who tried and failed to buy the Indians). Sad!”

It’s not as though the team just pulled a Guardian rabbit out of its hat. “We heard things like loyalty, pride and resiliency in being from Cleveland,” Indians president Brian Barren said to Plain-Dealer writer (and author of The Curse of Rocky Colavito) Terry Pluto. “They’re protective of our city. They’re protective of the land and everything about it. Those all became part of what Guardians really started to evoke from an emotional standpoint.”

Do we have a candidate for the single most asinine alternative name suggestion? Unfortunately, I do. Unless I see one even more ridiculous, the dubious winner goes to Don Wardlow. Renowned as the first successful blind broadcaster in professional baseball history, Wardlow is an active social media denizen, a still-irrepressible baseball fan and commentator, and a personally engaging man who’s prone now and then to demonstrating wisdom by walking the other way from it.

My first reply was, “Something tells me people have been trying to FORGET Ten-Cent Beer Night for decades. But I suspect you knew that.” To which Wardlow rejoined a) not everybody; b) “many” minor league teams continue “Thirsty Thursday” dollar-or-two beer promotions; and, c) that the irrepressible humourist P.J. O’Rourke “coined a name for the kind of people who want to forget and destroy fun pursuits like dime beer night. He calls them ‘The FunSuckers’.”

Wardlow wrote like a man who didn’t remember what fun pursuits really made the original Ten-Cent Beer Night on 4 June 1974 so “memorable.” (It just so happened to be my late younger brother’s birthday in the bargain.)  It was a not-so-regular riot, Alice. The Indians might have done better to postpone the event for a different game.

The Indians hosted the Rangers in the old but hardly forgotten Municipal Stadium. (Known colloquially as the Mistake on the Lake.) A week earlier, the two teams played in Arlington and included a bench-clearing brawl among the festivities. Rangers infielder Lenny Randle plowed Indians pitcher Milt Wilcox coming to tag him on the first base line while running out a bunt to trigger the scrum; Randle steamed over nearly being hit by a pitch prior to the bunt.

Lingering bad blood between the two teams was probably not the best condition to proceed with a promotion bound to get around 25,000 people (the night’s attendance) bombed out of their trees before the second inning.

The Rangers led the game 5-1 in the middle of the sixth. When Indians left fielder Leron Lee hit a liner up the middle that nailed Hall of Fame pitcher Ferguson Jenkins in the breadbasket and laid him out on the ground, the already-bombed fans began chanting, “Hit him again! Hit him again!” That may have been the most benign behaviour of the night.

A woman hit the field and flashed in the on-deck circle. A naked man ran out to second base right after Rangers designated hitter Tom Grieve hit his second of two home runs on the night in the fourth. Fans ran onto the field continuously during the game, at one point firing hot dogs at mid-game Rangers first base insertion Mike (The Human Rain Delay) Hargrove. The plague of the locusts didn’t drive the ancient Egyptians half as crazy.

In the bottom of the ninth, the Indians tied the game at five, with two out and the potential winning run on second, and Indians second baseman Jack Brohamer due to hit. And all hell broke irrevocably loose.

A fan ran out to Rangers left fielder Jeff Burroughs bent on stealing Burroughs’s hat, and the hapless Burroughs tripped and fell trying to prevent the theft. Rangers manager Billy Martin thought Burroughs had been attacked and hustled his team out to help him. A larger mob of fans swarmed out to the Rangers, prompting Indians manager Ken Aspromonte to order his team out to help the under-siege Rangers.

Some of the rioters began throwing steel chairs and seats somehow ripped away from the stands. One of the chairs hit Indians relief pitcher Tom Hilgendorf in the coconut. Another rioter picked a fist fight with Hargrove. Other rioters were determined to be carrying knives and other weapons.

Finally, both teams helped each other off the field before they could have ended up like massacre victims. The drunks continued their mayhem, tearing up the bases, tearing up the field, and throwing cups, rocks, bottles, radio batteries, hot dogs, food containers, and folding chairs around. Even umpire crew chief Nestor Chylak was a victim: he was hit in the head when a rioter threw a stadium seat at him.

That game-long mistake on the lake resulted in the game forfeited to the Rangers. Indians outfielder Rusty Torres, who’d pinch hit safely in the ninth and stood as that potential winning run, had just survived his second of three fan riots during his playing career. He’d been a Yankee when heartsick Senators fans broke RFK Stadium in the top of the ninth, causing a forfeit to his team near the end of the final Senators game ever; he’d be with the White Sox for their equally infamous Disco Demolition Night in 1979.

Some fun. Wardlow’s thought that the Indians changing their name to the Dime Beers would have been “great” was written to a group devoted to baseball nostalgia. Forgive me if I simply can’t be nostalgic about the arguable most chaotically decadent and destructive night in major league history. If there’s a proper word for that kind of nostalgia, I probably can’t say it in civil company.

2 thoughts on “The Guardians are coming”