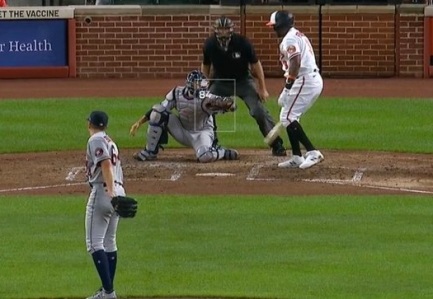 If this was ball one, I have X-ray vision. Even with a bad framing job that pitch crossed the plate under the strike zone’s ceiling.

Angel Hernandez sued MLB and lost when he tried claiming his race alone denied him postseason umpiring assignments. That was about at the end of spring training. Then, the Angel of Doom went out and continued proving you don’t have to be white to be among the top three to five reasons Robby the Umpbot will soon have major league employment.

Two things especially have stood out. Which may be saying something, depending on your experience.

Thing One: Hernandez called balls and strikes in Anaheim, in April, with the Angels playing the Astros, and blew a verified 24 pitch calls for an 83.2 percent rate of correct calls.

Thing Two: Hernandez may have cost the Astros a combined no-hitter Monday, when he blew an 0-2 strike from Astro righthander Brandon Bielak to Oriole third baseman Maikel Franco on the upper outside corner, still well within the zone, in the eighth inning.

What should have been strike three was ball one. And, with one out and one aboard on a walk, it was enough of reprieve for Franco to hit the next pitch over the left center field fence. Goodbye no-hitter, goodbye shutout.

Never mind the Astros going on to finish what they started otherwise, a 10-2 drubbing of the Woe-rioles. There was and remains no way strike three should have been called ball one.

It was a breaking ball that broke above the zone line but crossed the plate well inside the upper zone, even with Astros catcher Jason Castro trying to frame the pitch lower in the zone.

Unfortunately, it was Hernandez behind the plate. Putting pitchers into Hernandez’s hands is like putting skyjackers in charge of air traffic control.

“It’s the Astros, so I don’t care,” said Tortilla Fats on a face-time call.

“Let me guess,” I said. “You forgot there are only five members of the Astrogate team left on the roster.”

“It’s still the Astros, and I still don’t care,” Fats harrumphed back. “Cheaters once, cheaters always.”

“I bet you would have been an absolute alegria if you were a White Sox fan,” I said. “After all, game fixers once, game fixers always, right?”

“It’s still the Astros, so I don’t care,” Fats doubled down.

“So what if it was Jacob deGrom working the no-no in the eighth with one out, one aboard, Hernandez behind the plate, Endier Inciarte on the Mendoza Line at the plate, and it’s 0-2,” I said. “What if deGrom throws that breaking ball that climbs upstairs and drops right into the upper zone? What if Hernandez calls that ball one, and Inciarte hits deGrom’s next pitch over the fence?”

“He’s not on the Astros,” Fats tripled down. “He’s also Jacob deGrom. Even Angel Hernandez knows that. DeGrom’s not gonna lose a strike and then serve the murcielago espaugeti a meatball.”

“OK, bad example,” I admitted. “Suppose it was Shohei Ohtani. Jacob deGrom he ain’t. Suppose he has Franco 0-2 with one out, one on, and Hernandez behind the plate? Suppose Ohtani throws that breaker starting upstairs and falling right into the zone? Suppose the Angel of Doom blows that strike into ball one? Suppose Franco hits him over the left center field fence?”

“Ohtani’s not an Astro,” Fats quadrupled down. “So I still don’t care. Anyway, the Astros won the game, didn’t they? So what the hell do they have to complain about?”

I reminded Fats that losing a no-hitter—solo, combined, whatever—isn’t exactly celebration fodder. There are those fans who’d rather go to funerals than see no-hitters broken up in the latest innings.

“It’s still the Astros,” Fats quintupled down. “So I still don’t care.”

This was getting worse than Pedro Baez stopping to shop Amazon Prime between pitches.

“Fats, you’re the guy who agreed with me that the human element needs help,” I said. “You’re the guy who said the umpires have gotten so human that Roberto el arbitro roboto can’t come too soon. You said it because you said I was right. You agreed the blown calls have gone pandemic enough. You agreed—blown calls need to be reduced to just the occasional honest mistake and not a goddam habit. With Hernandez its more than a habit, it’s a way of life, apparently.”

“It’s still the Astros,” Fats sextupled down. “So I still don’t care.”

He has this much in common with the Angel of Doom. Sometimes, there’s just no reasoning with Fats.