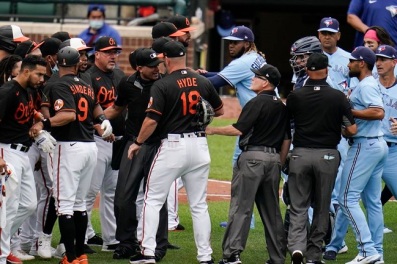 Manager Brandon Hyde and his Orioles after one of their own got drilled following back-to-back bombs in Camden Yards Saturday night. They know damn well Blue Jays pitcher Alek Manoah didn’t just slip a runaway fastball inside.

Here’s the Saturday night scenario in Baltimore: A rookie pitcher surrenders back-to-back home runs. He hits the next man up squarely on the bicep with the first pitch. He gets ejected post haste, then speaks to the press post-game.

“I tried to get that fastball in and it slipped away,” said Alek Manoah, the Blue Jays righthanded rook who drilled the Orioles’ Maikel Franco in the fourth inning, right after Ryan Mountcastle hit the first one-out, one on service over the left field fence and D.J. Stewart hit a 2-1 pitch over the right field fence.

The dog ate his homework.

And the Blue Jays overthrew the 5-2 lead Mountcastle and Stewart provided to gorge on the Orioles with a six-run ninth and a 10-7 win. It’s gotten that bad for this year’s Woe-rioles. They can’t even claim safety in a three, then a four-run lead.

But Franco looked distinctly unamused after he got that very pronounced plunk, and as Manoah stepped down from the mound walking toward the plate area. He looked as though he couldn’t decide whether he’d like to have Manoah for dinner or have him crucified on the warehouse behind the yard.

“I was confused by his reaction,” Manoah said. “I was questioning ‘What’s going on? What’s wrong?’ Those were my hand gestures as I was walking toward him. I didn’t understand the frustration there.”

“Even rookies don’t usually have to be told that a guy who can’t hit with a telephone pole this season doesn’t understand why he’s being made to pay because you just surrendered long distance back-to-back on your dollars,” said my long-distance pitching acquaintance, Sticky Fingers McSpidertack, on the phone this morning.

“So you’re telling me the dog ate his homework?” I asked, without a single thought of being a wisenheimer.

“So Manoah’s a little on the frustrated side,” I replied. “Didn’t anybody in the minors teach him even for a few minutes that the best pitchers in the business are going to have days where they’re going to get slapped silly? Happens even to the Hall of Famers, Stick.”

“He spent, what, three games in Triple-A,” McSpidertack answered. “Maybe that’s not long enough to teach a few baseball life lessons, maybe it is. I’m the wrong guy to ask. I didn’t get much past Single A, you know.”

“I know, but you don’t have corn flakes for brains, either. I don’t think I ever saw you try putting a hole in the next guy’s anatomy after you got hit for a skyrocket shot.”

“Of course not,” McSpidertack said. “And Franco’s not the one who hung that slider, kept that fastball’s feet tied at the ankles, or threw him a melon even a guy below the Mendoza Line could have given a ride.”

“A ride? OK, Mountcastle’s shot in the fourth just barely made it out, hit the rail behind the fence or something. Got a fastball to hit for that first shot in the second, this time he gets the breaking ball and breaks it because it didn’t really break.”

“Then Stewart turns on 2-1 and hits it right onto the Camden Yard promenade. Maybe it landed a few feet from where Boog Powell used to have and run that great barbeque pit.”

“Oh, yeah. I remember that pit, too. There wasn’t one single healthy thing coming off that pit, thank God.”

“Now it’s Franco. Compared to him this year, Mario Mendoza looks like Monster Mashup. The last guy on the planet, or at least on the Orioles, who’s going to take him into the ether. And Manoah throws one right up and into the poor guys’ upper bicep.”

“Well, let’s not get technical.”

“Fair enough,” McSpidertack said. “So when it’s all said and done, what’s the take?”

“What the hell do you think it is, Stick?”

“Yeah, I know. OK, here it is. Manoah was full of manure last night.”

“Your fault, buddy,” McSpidertack said, laughing. “Now tell me what all that was when skipper Hyde comes out of the dugout looking like he wants to take someone in a Toronto uniform apart but also looks like he doesn’t want his guys to do anything of the kind.”

“You need me to tell you that? I don’t think he wanted to take someone apart himself. I think he just wanted Manure—sorry, Manoah—thrown out of the game post haste. Which is exactly what he got. After he returned a few, shall we say, vulgar mash notes from Charlie Montoyo.”

McSpidertack excused himself a moment to refill his morning coffee. I needed another coffee jolt myself while he was at it. When he came back, I said, “Did you see Manure–sorry, Manoah again—talking to the press after the game?”

“Did you hear him say he tried to slip that fastball in and it got away?”

“Yeah,” McSpidertack said. “And if I had a dollar for every time I tried to get a fastball in that got away, I could buy that Antarctican beach club of yours.”

“No you couldn’t, Stick,” I said. “You said yourself your career was over before it really began. You didn’t really have time to learn how to slip runaway fastballs inside. At most you’d have had enough to buy me a new set of guitar strings.”

“Then the dog ate his homework.”