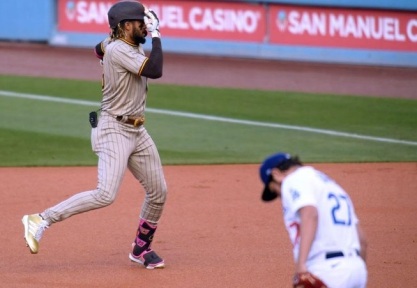 Trevor Bauer (27) wasn’t thrilled about surrendering bombs to Fernando Tatis, Jr.—but Bauer didn’t mind Tatis trolling him over them, either.

If the Dodgers and the Padres are really brewing baseball’s best rivalry since the Dodgers and the Giants, or the Yankees and the Red Sox, you can count on one less Fun Police officer overloading the Tabasco sauce. Turns out that the sense of humour of Trevor Bauer, Dodger pitcher, includes taking his lumps in the troll department.

Padres shortstop Fernando Tatis, Jr. accounted for the only two runs Bauer allowed Friday night with a pair of delicious looking home runs. He hit the first in the top of the first, sending a slightly hanging cutter clean over the left center field fence on the second pitch of the game.

After rounding first, Tatis put his right hand over his eye as he turned around toward the mound, then turned to continue running it out. When he hit the second bomb in the top of the sixth, following a six-pitch, full count wrestling match, Tatis crossed the plate with a move made familiar to UFC fans by Conor McGregor. It just so happens to be the move Bauer himself busts after he has a particularly controlling inning’s work.

By his own admission Bauer missed the hand-over-eye move, which referenced Bauer’s own one-eyed pitching against the Padres during a spring training contest, but he couldn’t help noticing the Padres dugout covering single eyes after Tatis’s second homer landed about three or four rows up the left center field bleachers.

Bauer didn’t mind any of the moves at all. In fact, talking to reporters after the game, which the Dodgers yanked out to win 5-4 despite Tatis’s mayhem, the righthander whose own trolling stones make him as controversial as he is colourful sent a message to every other pitcher on the third stone from the sun who thinks letting the kids play is tantamount to heresy.

“I like it. I think that pitchers who have that done to them and react by throwing at people, or getting upset and hitting people or whatever — I think it’s pretty soft,” Bauer told reporters after the game. “If you give up a homer, the guy should celebrate it. It’s hard to hit in the big leagues. So, I’m all for it. And I think it’s important that the game moves in that direction, and we stop throwing at people because they celebrated having some success on the field.”

Where was Bauer when the Cardinals got soft on Nick Castellanos a couple of days after Castellanos smashed a home run off Jack Flaherty? When Jack Woodford drilled him with a pitch, then bumped him as he crossed the plate beneath a sliding tag attempt, before Castellanos sprung up from his slide, barked a bit at Woodford, then started walking away from the plate area when Yadier Molina returned to the plate area and gave Castellanos a shove by his neck—when Castellanos wasn’t even looking behind him?

Rest assured, Bauer would have had a lecture to deliver Madison Bumgarner two years ago, after Max Muncy launched one of his first-inning services into McCovey Cove. “Don’t watch the ball—run!” Bumgarner barked. Rounding first and heading to second as he ran it out, Muncy by his own admission hollered back, precisely, “If you don’t want me to watch the ball, go get it out of the ocean.”

Perhaps if Bauer was a Dodger then, he’d have been the first to buy the blue T-shirt that hit the ground flying after that, with “Go Get It Out of the Ocean” emblazoned in white, over an upside-down reproduction of the flying baseball that’s part of the Dodgers’ official team logo.

Bauer knows Tatis has reasons enough to celebrate his handiwork lately. Friday night’s flogs came one night after the kid who’s must-see television did what no major leaguer had done before—hit a pair of bombs on the 22nd anniversary date of his father hitting a pair of salamis in the same inning against the same opponent.

Friday night also made Tatis the first player to hit a pair of bombs on back-to-back nights against Cy Young Award-winning pitchers, says the Elias Sports Bureau. On the anniversary of Pop’s pops, Tatis wreaked his two-bomb havoc on Clayton Kershaw’s dollar.

It’s just fun. When you know you’re facing a guy like that — he’s doing his stuff, he’s having fun on the mound, and when you get him you get him, and you celebrate, too. He’s a hard guy to deal with.

Bauer didn’t even mind when Padres first baseman Eric Hosmer got even in the sixth for what Bauer did in the fourth. Hosmer struck out awkwardly in the fourth and Bauer delivered his pulling-the-sword-out bit, “sword” considered contemporary baseball lingo for the broken swing a hitter often delivers when he’s been fooled like a rookie on a pitch. In the sixth, though, Hosmer nearly drilled a hole in Bauer with a hard liner up the pipe, then pulled a sword of his own out after reaching first.

Once again, Bauer had no intention of ducking into a nearby phone booth and changing from your everyday not-so-mild-mannered pitcher into the Fun Cop ready to clunk all miscreants with his nightstick and drag them off to the hoosegow.

“That’s what it is to be a competitor,” the righthander said. “I’m gonna go at you. I’m gonna get you sometimes, and you’re gonna get me sometimes. We can have fun, we can celebrate it while we’re still competing at the highest level. I just thought that was important to note tonight.”

I’ve been saying for how long that pitchers need to start thinking, “Hey, you got me good this time. Have your fun. I’ll get you out the next time, and I’ll have my fun?” I’m not even close to the only one. There was Sean Doolittle two years ago, when he was still a hard-toiling and popular National. “If a guy hits a home run off me, drops to his knees, pretends the bat is a bazooka, and shoots it out at the sky, I don’t give a shit,” he said emphatically in an interview I cited at the time.

When you’re in the backyard as a kid playing and falling in love with the game and you crush the ball? You do a celebration. You stand and watch it like Ken Griffey, Jr. You don’t hit the ball and put your head down and run as fast as you can. That’s not fun. It’s okay to embrace that part of a game.

To which I wrote, myself, “I hope a lot of hitters drop to one knee and point their bats to the sky like bazookas when they hit one out. I hope a lot of pitchers start channeling their inner Dennis Eckersley and start fanning pistols after they strike someone out. I’d kill to see a hitter moonwalk around the bases after hitting one out. Let’s see more keystone combinations chest bump or make like jugglers after they turn a particularly slick and tough double play.”

The new Murphy’s Law ought to be, “Celebrate!” Said Dale Murphy himself, in one of his first essays as a contributor to The Athletic. It must have sent the Fun Police to the whiskey bottles when Murphy called out Bumgarner over that Muncy waterball:

Admiring a home run is OK. Bat-flipping is OK. Emotion is OK. None of that is a sign of poor sportsmanship or disrespect for an opponent. It’s a celebration of achievement — and doing so should not only be allowed, but encouraged. Pitchers can shout excitedly after an important out. They can pump their fist after a clutch strikeout. Players, fans—and basically any rational-thinking human—will understand that no harm is intended by these spontaneous expressions of joy.

Wouldn’t you love to know what Bauer thought, when the Rangers decided it was right and proper to wait, until near the end of the final game of their final season series against the Blue Jays in May 2016, to repay Jose Bautista for an epic bat flip the previous October?

Bautista hit a monstrous three-run homer in the seventh to give the Jays a 6-3 lead that held up to send them to the previous American League Championship Series. He flipped his bat whirlybird style as he left the plate to run it out. Rogers Centre went nuclear. The Rangers pitcher who surrendered that bomb, Sam Dyson, spoke as a Fun Policeman after the game.

“Jose needs to calm that down, just kind of respect the game a little more,” Dyson said after the game. “He’s a huge role model for the younger generation that’s coming up playing this game, and I mean he’s doing stuff that kids do in Wiffle ball games and backyard baseball. It shouldn’t be done.” (I couldn’t resist rejoining, “That’s how many kids playing Wiffle ball who grow up to hit postseason-advancing skyrockets?”)

Bautista was hit by a pitch late in that mid-May 2016 game. Then, he delivered a hard slide at second to let the Rangers know he didn’t appreciate the too-long-delayed “message.” Then he had to bear the brunt of the followup brickbats when Rougned Odor swung on him. Pretty soft? The Rangers were squishy cowards in tough guy clothing behind Mommy’s dress when Matt Bush—a relief pitcher who wasn’t even a Ranger in October 2015—delivered that seven-months delayed drill.

Bauer has his faults. Misogynistic harassment of women online is known to be one of them. But he’s never been accused of being physically abusive with any woman he’s dated or associated with. The Dyson who demanded Bautista “just kind of respect the game a little more” is the one who got suspended for this season for abusing his former girlfriend.

You can hear the Old Fart Contingent [OFC] who didn’t or don’t play the game fuming about Respect For The Game, too. Most of the same OFC want to see players treat baseball like Serious Business on the field or at the plate or around the bases—but they  become the first to scream, “It’s a [fornicating] game!” when it’s free agency contract time.

Bauer and Tatis have just fired off significant shots in what should be a continuing, baseball-wide campaign to defund the Fun Police. The defunding shouldn’t be limited to players alone.