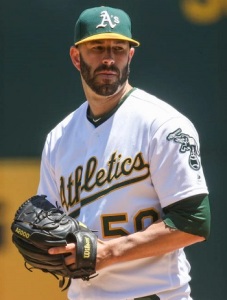 Under ordinary circumstances a team signing a good pitcher who’s a worthy number-four man in a starting rotation isn’t extraordinary. But then there’s Mike Fiers, whom the Athletics have re-upped for 2021 on a one-year, $3.5 million deal. There’s also San Francisco Chronicle baseball writer Susan Slusser dropping a troublesome suggestion.

Now the Giants’ beat writer and a former president of the Baseball Writers Association of America, Slusser was a longtime A’s beat writer for the Chronicle. So when she says, “The A’s were the only team to make Fiers an offer, I’m told. Interesting – was he being blackballed for being a whistleblower? I certainly hope that’s not the case,” it ought to sound an alarm or two.

Lots of teams have been in need of third and below starters. It shouldn’t have been that difficult for an innings-eating righthander with fourth-starter solidity to find a job even in this winter’s somewhat surreal market. Except that Fiers, who did say his preference was to stay in Oakland, isn’t just an ordinary fourth starter.

Whistleblowers don’t fare as well as some people think after their whistles blast cases of wrongdoing to smithereens. When Fiers blew his on the Astros’ illegal off-field-based electronic sign-stealing cheating of 2017 and some of 2018 (at least) to The Athletic, it seemed as though half of baseball considered him a hero and half a rat bastard.

He moved to the Tigers for 2018 and to the A’s later that season. He warned both collections of new teammates that the Astros were playing with a stacked deck. He and others suspecting the Astros of extracurricular pitch intelligence also tried futilely to convince members of the press to run with and investigate it; those writers couldn’t convince their editors to let them run without a name willing to go on public record.

That’s when Fiers finally put his name on it to Athletic writers Ken Rosenthal and Evan Drellich in November 2019. From which point it swelled toward Commissioner Rob Manfred’s marshmallow hammer, the hammer constructed when he handed Astro players immunity in return for spilling, suspended a GM and a manager, voided two key draft picks and fined owner Jim Crane pocket money.

The Astros likely weren’t the only team in the Show using extracurricular off-field-based sign stealing, just the most sophisticated. They took an existing center field camera off the mandatory eight-second delay or installed a surreptitious new such camera, set monitors up in the clubhouse, and translators would decode the pitch signs and signal hitters with bangs on an adjacent trash can.

The 2018 Red Sox turned out to have enlisted their video rooms at home and on the road for a little extra aid to old-fashioned gamesmanship: the signs would be decoded off the feeds and sent to baserunners to signal batters. They—and anyone else thinking and doing likewise (would you be shocked?)—didn’t install anything extra.

Essentially, the Show handed those Rogue Sox and others, who knows how many yet, the keys to the liquor cabinet and dared them not to imbibe while Mom and Dad high tailed it out of town for the weekend.

Some looked at Fiers’ membership on the 2017 Astros and discovered a rank hypocrite, never mind that if he’d blown his whistle then he’d also have been denounced most likely as a backstabber on the spot. (Fiers wasn’t on those Astros’ postseason roster.) It’s called hell if you do and hell if you don’t.

“Even in cases of obvious right and wrong,” wrote The Athletic‘s Marc Carig last year, “crying foul on family is easy to call for in retrospect and hard to do in real time.” Remind yourself if you will how often you learned of egregious wrongdoing and lamented the lack of a whistleblower. Now ask how simple it really is to blow the whistle in the moment or even a comparatively short time later.

It took New York police legends Frank Serpico and David Durk several years’ futility trying to get that police department to attack graft before they finally went to the New York Times and launched the largest New York police scandal since Brooklyn-based bookie Harry Gross was found to have enough police on his payroll to staff half his borough’s precincts.

Cheating may be sports’ oldest profession, but affirmations don’t always happen concurrent to the instances, for the reason Carig enunciated. When Joshua Prager finally affirmed what was long just suspected—that the 1951 New York Giants cheated their way back into the pennant race to force the fabled playoff with an elaborate telescopic sign-stealing operation—it was half a century after the fact, with the surviving principals willing to talk long retired.

Prager eventually expanded his expose into The Echoing Green: The Untold Story of Bobby Thomson, Ralph Branca, and the Shot Heard Round the World. “A spitballer or corker can be caught by an umpire, who has the right to examine or confiscate equipment,” wrote the Washington Post‘s Thomas Boswell when Prager first hit The Wall Street Journal running.

Both teams play on the same damp base paths and inclined foul lines, even if they’ve been doctored a bit for home-field advantage.

But an elaborate system of sign stealing—with an old pro in the art of signs in a hidden space—is almost impossible to catch. Umps and foes are defenseless. The game becomes fundamentally unfair because knowing what’s coming is a big deal.

If revealing the Astros’ elaborate 2017-18 system at last made Fiers a criminal, maybe baseball needs more such criminals. If other teams needing fourth starters refused to even think about him because he blew a whistle instead of a ball game, after two years worth of trying futilely to get others to investigate without a blown whistle, something’s worse than a hanging slider driven out of sight.

Slusser doesn’t know for dead last certain. Neither does anyone else, possibly including Fiers. To those who still think blowing the whistle is worse than the crime, perhaps you’d like to ask what might have been, instead, if Alexander Butterfield hadn’t suffered a pang of conscience and an inability to lie under oath enough to expose Richard Nixon’s White House taping system.