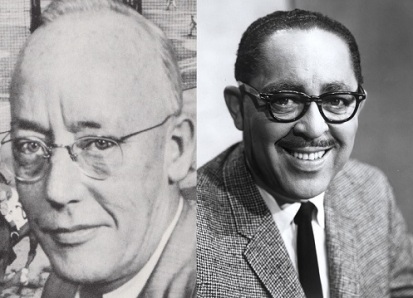 Did you forget that the Baseball Writers Association of America is thinking of changing the name of another award, too? Much was written and said over taking Kenesaw Mountain Landis’s name off the Most Valuable Player award, and the BBWAA also ponders taking J.G. Taylor Spink’s name off the Hall of Fame award given to a distinguished baseball writer every year.

Being a baseball writer myself if not a member of the BBWAA, I have particular interest in the Spink Award, even if I have more chance of winning the Howitzer Prize for Extinguished Commentary than the Spink. The BBWAA wants to change the name because Spink himself, the longtime publisher of The Sporting News, opposed “organised baseball’s” integration, and they are not wrong.

“In August 1942 [Spink] wrote an editorial saying that baseball did not have a color line, but that segregation was in the best interests of both blacks and whites because the mixing of races would create riots in the stands,” Daryl Russell Grigsby reminded us in Celebrating Ourselves: African-Americans and the Promise of Baseball. ” . . . Spink’s defense of segregation was largely not based on fact but on fear and prejudice.”

Claire Smith, an African-American lady and the first of her gender to receive the Spink Award, has nailed it herself. “If this is the time of introspection,’’ she told USA Today baseball columnist Bob Nightengale last summer, “if Mississippi can change the flag, and Confederate statues can be removed from state capitals, we can do this.” If Landis can be removed from the MVP award because of his active enforcement of baseball’s old and disgraceful colour line, then yes, Spink can be removed from the Hall of Fame honourarium still bearing his name.

The BBWAA is voting on that as I write. Remove Spink’s name, though, and for whom would you re-name the award?

With the MVP the choices may be simpler. You can choose Happy Chandler, the commissioner who refused to disallow Branch Rickey signing Jackie Robinson and breaking the colour line at last; you can choose Rickey himself. You can choose instead the African-American player who remains the only one to win the MVP in each of the National and the American Leagues, Hall of Famer Frank Robinson.

The choices to re-name the Spink Award? One can think of quite the handful, Spink winners all, including a Pulitzer Prize winner or three while thinking.

There’s Red Smith, as close to a poet laureate of daily baseball writing as the game has known from his years with the New York Herald-Tribune and the New York Times. There’s Jim Murray, the Los Angeles Times fixture whose wit made you think he was what Fred Allen might have been if Allen had chosen sportswriting instead of radio comedy. There’s Shirley Povich, the grand old man of Washington baseball, who practically raised the Washington Post‘s sports section by himself. Practically.

There’s Damon Runyon, who wrote eloquently, edgily, and wittily about baseball when he wasn’t celebrating Broadway. (You really should hunt down his anthology, Guys, Dolls, and Curveballs: Damon Runyon on Baseball.) There’s Ring Lardner, baseball storyteller and reporter alike, at least before the Black Sox scandal put the first serious dent into his love of the game. (The live ball era finished what the Black Sox started for Lardner.)

There’s Wendell Smith, whose reporting for the Pittsburgh Courier was a phenomenal pressure point toward baseball’s integration, which also begs the question why the best of his baseball writings haven’t been anthologised for today’s generations who need to know the arguable most powerful black press voice toward Jackie Robinson’s advent.

There’s Smith’s African-American colleague Sam Lacy, who did with the Chicago Defender and the Baltimore Afro-American what Smith did with the Courier. He became one of the first black members of the BBWAA while he was at it. (Lacy published a memoir, but his baseball and sports journalism, too, has yet to be anthologised so far as I know.)

And, especially, there’s Roger Angell, about whom it’s been said (by me, to a fare-thee-well, but tough tarantulas) that he isn’t baseball’s Homer, Homer was ancient Greece’s Roger Angell. He was also the first non-BBWAA member and first non-daily baseball reporter to be honoured with the Spink Award.

Any one of those writers’ names would absolutely grace the award. But I have another dog in the hunt, by way of a journalism legend named Murray Kempton.

In 1993, Kempton told David Remnick for a New Yorker profile (which included the aforementioned tale), during one of New York’s too-frequent tabloid wars, “In the end, my view of this so-called tabloid war is that I just don’t consider the character of publishers. I’m rooting for my friends—the reporters.”

(Harking back to a 1962 issue of Sport, Kempton wrote then of the Polo Grounds’ re-opening with the birth of the Mets: The return of the Polo Grounds to the National League was like the raising of a sunken cathedral. It is a place sacred in the history and hallowed in the memory. Christy Mathewson used to make his home on the bluff above the Polo Grounds. When he was working, Mrs. Mathewson could look out her window at the scoreboard and, when the seventh inning came, put the roast in the oven secure in the knowledge that her husband would be finished and showered and home from the plough in an hour.)

For re-naming the Spink Award, I’m rooting for my kindred, too—the reporters.