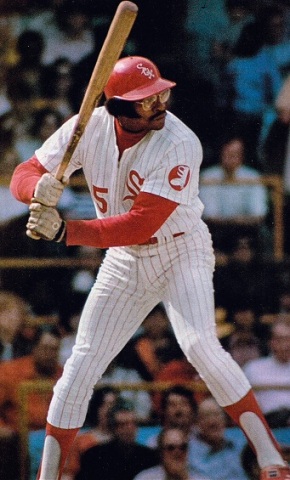 Dick Allen’s big stick hit home runs that should have had astronauts aboard.

Around noontime Monday (PST), his family announced it on his own Twitter account. I came home from a morning errand to see the news, and I could only open his Twitter and write, without clicking on the heart symbol for a like, “How can you like the passing of a great ballplayer and a good man?”

Dick Allen is dead at 78 after a battle with cancer. There’d been a swell of support for his election to the Hall of Fame in recent years. He might have made it via the Golden Era Committee this year. Except the committee decided that, well, if they couldn’t meet in person to discuss and vote, by God they weren’t going to meet until next year.

When they made that announcement in late August, I zapped the Hall of Fame and the Committee for suddenly discovering their inner Luddism: “Hall of Fame chairman Jane Forbes Clark seems to think, erroneously, that technology mustn’t overcome the coronavirus’s travel confusions and constrictions to compromise Era Committee nominations and elections.”

They never heard of setting up a Zoom remote conference? Trust me, since I just took part in my own first one. They can be set up simply, such a conference is restricted to invited guests via meeting codes and passwords, and none would have compromised the integrity of the discussions and votes.

The Committee pushed the meeting back to winter 2021. They just might elect Allen this time around. (He missed by one vote the last time around, in 2014.) Only he’ll be well serene and happy in the company of the angels and not on earth to accept the plaque I’m sure his family will accept proudly when it’s awarded.

It’s not that my opinion means two figs, but I’ve championed Allen’s Hall of Fame election for long enough now, and I’ve seen nothing to change my mind about it. I was on the fence about it for a good long while before that, alas, but once and for all I took as deep a look into the record as it was as I could and became convinced. Allen has a no-questions-should-be-asked case as a peak value Hall of Famer.

If you consider his peak to be 1964-1972, Allen’s .936 OPS and 164 OPS+ should say most of it, especially considering most of that peak came in one of the toughest hitting eras ever. If you consider the absolutely unfair and out-of-line racism he was forced to face and fight, especially as a Phillie, it’s to wonder and marvel that he could even check in at the plate, never mind play as he did when he was healthy.

Let’s look at Allen and his big stick by way of my Real Batting Average (RBA) metric. When I first examined Allen that way two years ago, I discovered a flaw: I shouldn’t have included sacrifice bunts or excluded times he was hit by pitches. The former’s flaw: you shouldn’t be credited when you’re surrendering outs willingly; outs are precious. The latter’s flaw: if the pitcher’s fool enough to drill you, let it be on his head and to your credit.

The RBA metric otherwise is a bid to atone for the incompleteness of the traditional batting average, one of the single most flawed statistics ever devised. Hits divided by official at-bats treats all hits equally and misses too much of what batters do to create and produce runs on the scoreboard. (You still think all hits are equal? Tell me why a single’s as good as a double, triple, or home run and vice versa. Didn’t think so.)

My RBA adds total bases (which treats hits the unequal way they deserve), walks, intentional walks (one more time: you should damn well get credit when the other guys prefer you take your base than their heads off), sacrifice flies (you didn’t intend to fly out but it scored a run so credit to you!), and times you were hit by pitches, and divides the sum by your total plate appearances.

And, this is Dick Allen’s peak according to RBA:

Rest assured that these numbers helped rank Allen among the top twenty third basemen who ever played major league baseball. They would also show him with the third-highest RBA of all post-World War II/post-integration/night-ball era Hall of Fame third basemen except two: in ascending order, Chipper Jones and Mike Schmidt.

This is before revisiting his breathtaking power or mentioning that Allen was one of the smartest and most effective baserunners of his time. (Did you know Allen took extra bases on followup hits 53 percent of the time he reached base?) And, before lamenting that early enough injuries impacted his defense either at third base or the position to which his injury-weakened throwing arm finally sent him full time, first base.

Allen didn’t just hit home runs. Phrased politely, they didn’t need the proverbial meals and stewardesses aboard. What he hit typically should have had astronauts. When first analysing his performance two years ago, I concluded based on the evidence that, if he’d been far more healthy and uninjured, Allen might have finished his career with 525 home runs or thereabout.

Hall of Famer Willie Stargell once tried to take the sting out of the Philadelphia boo birds’ booing Allen by suggesting the reason they booed him was that his home runs didn’t always stay in the park to become souvenirs.

That’s putting things too politely. Allen once told a Phillies historian (and an Allen biographer), William C. Kashatus, “I thought of myself as a victim of racism. I was also something of a jerk. There were others who had to deal with racism, and some of them handled it better than I did. But that’s all in the past. I’m at peace with my career, and grateful that the Lord gave me the opportunity.”

A man who grew up in a racially tolerant and accommodating Pennsylvania hamlet, but whom the Phillies sent to 1963 Little Rock with no support system, who once remembered, “Maybe if the Phillies had called me in, man to man, like the Dodgers had done with Jackie Robinson, and said, “Dick, this is what we have in mind. It’s going to be very difficult but we’re with you”—at least I would have been prepared,” has no reason to apologise.

Whether you believe he was a jerk or just immature, some people persist in believing Allen’s career was shortened by it. Not so, argued Rob Neyer when writing The Big Book of Baseball Lineups: “I don’t think his immaturity had much to do with the length of his career. He just got hurt, and so he didn’t enjoy the sort of late career that most great hitters do. It’s that, as much as all the other stuff, that has kept him out of the Hall of Fame.”

Oh, the sad irony. When the Phillies finally traded Allen out of town, to the St. Louis Cardinals, they thought they were getting Curt Flood in return in the package. To Flood, the trade smacked of treating even a $90,000 a year center fielder as a piece of property like a slave. To Allen, who’d been to hell and back almost daily in Philadelphia and rooted for Flood’s reserve clause lawsuit, the trade was his Emancipation Proclamation.

Allen incurred assorted nagging injuries and severe leg injuries after leaving Philadelphia and especially during his otherwise shining time with the Chicago White Sox. (He won the American League’s Most Valuable Player award in his first White Sox season.) “[W]hat he did for us in Chicago was amazing,” said Allen’s White Sox manager, Chuck Tanner.

Dick was the leader of our team, the captain, the manager on the field. He took care of the young kids, took them under his wing. And he played every game as if it was his last day on earth . . . He played hurt for us so many times that they thought he was Superman.  But he wasn’t; he was human.  If anything, he was hurting himself trying to come back too soon.

[C]hoosing to vote for him means focusing on that considerable peak while giving him the benefit of the doubt on the factors that shortened his career. From here, the litany is sizable enough to justify that. Allen did nothing to deserve the racism and hatred he battled in Little Rock and Philadelphia, or the condescension of the lily-white media that refused to even call him by his correct name. To underplay the extent to which those forces shaped his conduct and his public persona thereafter is to hold him to an impossibly high standard; not everyone can be Jackie Robinson or Ernie Banks. The distortions that influenced the negative views of him . . . were damaging. To give them the upper hand is to reject honest inquiry into his career.

His death before the Hall election he deserves inflicts a final injustice upon a man accompanied by too many injustices too long. It elevates him and reduces his critics further that he eventually found equilibrium in his life and peace with baseball.

Allen knew and survived heartbreak enough outside of the racial buffetings: a painful divorce, the unexpected murder of his daughter, Terri, the electrical-fire destruction of the farm on which he hoped to raise thoroughbred horses. (“If my horse can’t eat it, I don’t want to play on it,” he once cracked about artificial turf.)

He overcame those to re-marry happily, keep friends and family close, become one of the most popular members of the Phillies’ speakers’ bureau under a very different organisation than the one for which he played, and a friendly social media presence who beamed justifiably when the Negro Leagues Hall of Fame inducted him in 2018.

When the Phillies finally retired Allen’s uniform number 15 in September, the Philadelphia Inquirer suggested the timing might have been intended partially to push for Allen’s at-last enshrinement in Cooperstown. Allen himself once told Kashatus, “What I’ve done, I’m pretty happy with it. So whatever happens with the Hall of Fame, I’m fine with it. Besides, I’m just a name. God gave me the talent to hit a baseball, and I used it the best I could. I just thank Him for blessing me with that ability and allowing me to play the game when I did.”

Former Phillies pitcher Larry Christenson, an Allen teammate when the latter returned to Philadelphia in 1975, remembered then a teammate’s teammate who preferred to lead by quiet example and humanness. Allen often invited Christenson to lunch on road trips and once signed a bat for him as a memento: “To L.C., two homers with my bat. How about that? Dick Allen.”

Christenson once borrowed Allen’s once-fabled 40-ounce bat in a game. “Son,” Allen told the pitcher, “if you can swing it, you can use it.” Christenson used it to hit a home run in that day’s game.

Bereft on earth now are Allen’s loving wife, Willa, his family, his friends, and all of those who saw through the cluttering, clattering nonsense and saw the player and the real young man who didn’t deserve his seasons in hell and deserved election to the Hall of Fame. Now that election will have to be posthumous on earth, damn it.

But surely the Lord’s angels escorted Allen kindly and gently to the Elysian Fields, and that was the only other thing we could ask through our own loss.

Some portions of this essay have been published by the author previously.