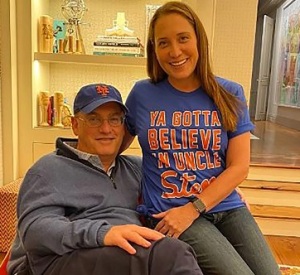 The New York Post captures Steven Cohen and his wife, Amy, celebrating Cohen’s purchase of the team he’s rooted for since the day they were born.

Forget everything else since the World Series finished and ponder this. A fellow Met fan since the day they were born now owns the team. And he hit Twitter running over Halloween weekend, soliciting his fellow Met fans’ input on improving their experience as fans.

Social media has been with us by and large since about the turn of the century, or within the first few years. Until Steve Cohen did it, I don’t remember any incoming baseball owners jumping aboard Twitter, reviving a dormant account, and asking their new teams’ fans much of anything, never mind a question like that.

Some of the answers Cohen received during his weekend Tweet and greet were on the sublime side, as were his replies. “You’ve already done it by buying the team,” tweeted a user handled Austin. “Nah,” Cohen replied, “we can do more than that.” David Tratner, identifying himself as a former NFL public relations executive, tweeted, “Hire smart people in every area (which may include people already in the building).”  Cohen replied, “Hire them smarter than you. That has worked for me in the hedge fund biz.”

Except perhaps for that time when his old hedge fund outfit got spanked by the Securities and Exchange Commission over insider trading. Now, read carefully: Cohen himself was neither accused of nor charged with wrongdoing in that case. It didn’t stop assorted naysayers from screaming blue murder over the prospect of a “felon” becoming a baseball owner.

It also didn’t stop New York’s self-congratulatory mayor, Bill de Blasio, a man who illustrates wisdom by standing athwart it, from threatening at almost the eleventh hour to kill Cohen’s purchase of the Mets. Cloaking himself in doing “our due diligence,” de Blasio sought to use a customarily obscure clause in Citi Field’s land lease agreement with the city—empowering the city to block users known for (brace yourselves) “moral turpitude” from buying—to kill the sale. (The Mets actually own Citi Field through their Queens Ballpark Company subsidiary, but the city owns the land on which it sits.)

When de Blasio was quoted credibly as saying he didn’t want some “billionaire hedge fund” guy buying the Mets, nobody thought to ask, nor did he deign to say so far as is known, which kind of billionaire he preferred to buy the team. Finally, last Friday, the requisite majority of major league owners voted to approve the sale. Cohen thus got the next-best thing to every Met fan’s boyhood wish. If he couldn’t become a Met, at least he got to buy the team.

Some of the weekend answers Cohen got were on the ridiculous side, too, but you might have expected that. “We also don’t need a new analytics department,” tweeted a user handled LOLCOWBOYS—his @ account identifier indicated himself as a Yankee fan—after suggesting the Mets should sign such aging free agents as Yadier Molina and/or J.A. Happ. “Going old school works. Just ask A rod. You should hire A rod as head of the analytics department.”

Cohen didn’t answer that one. But when not rejecting the former Yankee whose powers of baseball analysis have been found very wanting of late, respondents urged the Mets away from baseball’s playing senior citizens: “For too long,” tweeted a fan named Pete, “the Mets have been a team where talent acquired was of the Player to be named to the DL later variety.“

A considerable consensus urged Cohen to consider restoring the black alternate jerseys the Mets wore a decade ago. (Say I: No chance. Stick to those handsome blue alternates.) Another fan suggested installing markers in the parking lot, where Shea Stadium used to sit, signifying important moments and plays in Met history, such as the precise spot where left fielder Cleon Jones caught the final out of the 1969 World Series. (Sound as a nut.)

“I like that one,” replied Cohen. He also went on to promise a far better institutional job of honouring the better and more instructive sides of the Mets’ chameleonic history, adding that he’d even return the Mets’ annual Old-Timers Days on partial behalf of doing exactly that. “No brainer,” he said.

My own contribution to that cause was suggesting such uniform number retirements as David Wright (5), Hall of Fame catcher Gary Carter (8), Dwight Gooden (16), should-be Hall of Famer Keith Hernandez (17), and Tug McGraw (45). Cohen didn’t reply to that one as I write, but a Twitter account identified as Carter’s gave it a like. My best guess is that the account based from Carter’s Palm Beach home belongs to his family. (He died at 57 in 2012.)

I should have made another suggestion, on behalf of such former Mets as pitcher Bill Denehy, outfielder George (The Stork) Theodore, and other pre-1980 Mets whose major league careers came and went in a blink for assorted reasons. So I’ll make it now.

Mr. Cohen, you have the kind of good will and resources to make something happen for Denehy, Theodore, and over six hundred other former major leaguers who, for reasons ranging from the nebulous to the ridiculous, got frozen out of a 1980 re-alignment of baseball’s player pension plan.

That mistake affected over 1,100 former players in 1980; attrition since has reduced the number to a little over six hundred. Denehy* may be the best-remembered of the impacted former Mets: after an injury-blocked rookie season in 1967, the Mets traded him to the Washington Senators in order to bring their manager, Gil Hodges, back to New York to manage the Mets.

An unconscionable volume of cortisone injections following his original 1967 shoulder injury—which proved a rotator cuff tear, about which then-Met and other medical personnel were far less than truthful with him—have helped make Denehy legally blind since 2005 and place him now on the threshold of total blindness. He isn’t the only one of the six hundred plus pension freeze-outs with profound health issues.

Eight years ago, then-Players Association director Michael Weiner and then-commissioner Bud Selig got Denehy, Theodore, and their fellow pension freeze-outs a small but telling redress. They got those players $625 per quarter for every 43 days’ major league service time for up to four years. The kicker is that they can’t pass those monies on to their loved ones after they pass on. And they still can’t buy in to the players’ health plan.

“It was a nice gesture on the part of Weiner and Selig who, undoubtedly also realized it could hardly make up for all those lost years in which the pre-1980 players got bupkis,” wrote longtime New York Daily News columnist Bill Madden last February.

Just why those players were frozen out of the original 1980 re-alignment remains somewhat mysterious. Denehy, former Texas Rangers pitching phenom David Clyde, and other affected players have said they think many if not most involved in the re-alignment believed many if not most of those short-career men were little more than September call-ups.

Denehy made the 1967 Mets, the 1968 Senators, and the 1971 Detroit Tigers out of spring training. Clyde was signed for a six-figure bonus right out of high school and thrown onto the mound for the Rangers immediately, before the Rangers broke a promise to Clyde and manager Whitey Herzog to send him to the minors for proper seasoning after letting him start twice to goose the struggling Rangers’ gates.

More of the short-career men made clubs out of spring training than the owners and the union remembered or even cared to know. Eligible former players since 1980 collect their pensions whether they were blink-of-an-eye one-day fill-ins, short-term scrubs, long-term spare parts, long-term regulars, or Hall of Famers. Pension vesting isn’t tied to statistical achievement.

It’s rare enough to see a genuine fan grow up to become the owner of the team he grew up loving. (Like me, Mr. Cohen, you saw your first live Mets games in the ancient wreck of the Polo Grounds in 1962-1963.) It’s even more rare when such an owner actively solicits his fans’ input and doesn’t laugh them out of town for their answers.

Mr. Cohen, the worst kept secret on earth is that your pockets are deeper than the Atlantic Ocean. You don’t have to open them to every last one of the six hundred plus pension freeze-outs. If all you do is address Bill Denehy, George Theodore, and their fellow short-career pre-1980 Mets, you would throw down one of the most considerable gauntlets of your time.

“Realistically speaking,” Denehy told me this morning, “no one’s going to come in and bankroll the whole six hundred [plus] players. But if they just take care of the former players in their own organisations, it would be a great start and get the ball rolling a little bit.”

You made yourself an instant hero among Met fans with your weekend Twitter excursion, Mr. Cohen. For that alone, you may repeal the law that says no fan in the history of professional sports has ever bought a ticket to a game to see the team’s owner. (Frustrated 1980s Yankee fans buying into Yankee Stadium to boo, hiss, insult, or hang George Steinbrenner in effigy at the depth of his act notwithstanding.)

You might make yourself even more a hero taking that pension bull by the proverbial horns, especially if more Met fans really knew and understood what little the Denehys and Theodores and others ask for having played the game even briefly. It may help you to know that the late Players Association director Marvin Miller—who was finally elected to the Hall of Fame posthumously as a pioneer—is known to have said in his retirement that not revisiting the 1980 pension re-alignment on behalf of the short career freeze-outs was his biggest regret.

Moving to take care of just your Mets’ own short-career pension freeze-outs would put you even further on the side of the angels and challenge your fellow owners to take a second, third, and even fourth look at their own, Mr. Cohen. Those would be the most profound looks those former players have received in years.

* Fair disclosure: Since interviewing him for a 2019 essay—recalling his role in bringing Hodges to New York, his battles with substance abuse borne in due course of his rookie-season shoulder injury misdiagnosis, after he was subject to such a volume of cortisone shots that eventually contributed to the blindness with which he’s lived since 2005—Bill Denehy and myself have become friends.