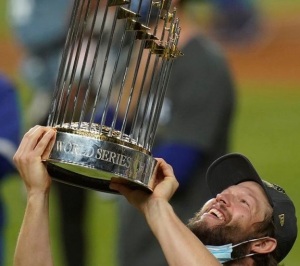 How sweet it is for Clayton Kershaw at last.

Above and beyond the obvious, two sights and sounds in Globe Life Field tended to out-shine the rest after the Los Angeles Dodgers won the World Series. In order, they were commissioner Rob Manfred being booed while he spoke during postgame ceremonies, and Clayton Kershaw hoisting the World Series trophy with the biggest grin this side of Teeth Malloy.

Getting a season in at all in the time of coronavirus was somewhat miraculous, even if Manfred and his overlords did just about everything in their power to make it difficult, impossible, and don’t-even-think-about-it. Would it have been better to live without the Show at all this year? We’ll never know now.

Then Manfred and his masters decided to impose the sixty-game irregular season. And they couldn’t resist tinkering like the nutty professor going a hundred miles backward to go one mile forward. Manfred may be seen as just the owners’ messenger boy, but his office also allows him liberal latitude to act on behalf of the good of the game.

One out of four ain’t bad. The universal DH needs to stay. Period dot period. That one Manfred gets right. It only took 129 years for the National League to be made to catch up to the NL owner who thought of it in the first place because the pitchers in his day couldn’t hit, either.

God help us if Manfred decides the 29-31 Houston Astros getting to within one game of winning the pennant says, “See? We told you! Letting the losers in didn’t stop the cream from rising!” Even allowing the irregular, truncated regular season, there was only one reason to pray the Astros got to the World Series: if the likewise 29-31 Milwaukee Brewers somehow got there, too.

It would have made Manfred and his masters look like the fools they would have been if American baseball’s annual crowning achievement had been decided between (ir)regular season losers. Not that they needed that to look foolish, of course.

Pray that even one among the owners to whom the common good of the game is, was, and always will be making money for it otherwise hits Manfred with the wake-up-your-brain two-by-four. And, that 2021 will see a return to some semblance of normalcy. Just some will do. Would Steve Cohen, the brand-new owner of the New York Mets, like to be that stand-up guy? He’d make Branch Rickey the proudest man in the Elysian Fields.

Enough of that for now. Manfred getting booed is only a transient pleasure. Kershaw hoisting that piece of metal is transcendent. Especially after he pitched like the Hall of Famer-to-be that he is all postseason long. Especially after his manager finally figured out how to keep him from situations in which even the Greatest Pitcher of His Generation could get bushwhacked, bastinadoed, broiled, and basted.

The narrative of Kershaw looking like Sandy Koufax in his regular season career but Crazy Schmit in the postseason was always a little on the ridiculous side. It finally got exhausting to remind people that you could probably win a pennant fielding a team full of the Hall of Famers whose regular seasons put them in Cooperstown but whose World Series gigs compared to Blooperstown, often through no fault of their own.

Juan Marichal only got to appear in one Series at all and barely had the chance to strut his real stuff. Willie Mays had The Catch in 1954 but nothing much else to show for three Series. Ted Simmons reached one Series near the end of his career and showed the beginning of his decline phase. Ted Williams reached one Series, was throttled by an elbow injury, and never got another chance. Robin Roberts lost a tough game in his only World Series and never got another chance to try. Joe Morgan had the occasional moment but a modest overall Series jacket.

“Baseball executives like to talk about how variance dictates the postseason,” Andy McCullough writes in The Athletic. Kershaw has pitched long enough in October to live that truism. It would be disingenuous to say his bad numbers stem from bad luck. Yet it would be foolish to ignore the breaks.”

Once upon a time, Kershaw’s handiwork got wrecked through little enough fault of his own. This time, whenever Kershaw needed the breaks the most he got them. Breaks like Cody Bellinger’s stupefying, back-to-the-wall, rising theft of a go-ahead bomb by Fernando Tatis, Jr. Like the Braves’ Austin Riley tripping into a key out. Like Victor Gonzalez in relief ending a troublesome inning by palming Mike Zunino’s speeding bullet.

Kershaw is a man whose teammates describe him as playful and a little goofy on the days he doesn’t pitch. He’s so unapologetically footloose when playing with his young children at the ballpark and elsewhere on his days off that it’s easy to ask who’s more fortunate, Kershaw for having such agreeably charming children or the children for having such an agreeable father.

He also prizes control of his work and his personal environment on the days he does pitch. Especially the past two seasons, when he’s had to remake his approach in part because of persistent back issues and in part because of the onset of baseball age. But he appreciates when he gets those little extras in a game that so often prove the equivalent of the World War II fighter pilot having nothing but a turning propeller between himself and disaster.

This time around, Kershaw didn’t have to be the most powerful engine on the Dodger aircraft. He just had to do what he could do with whatever he had. The Dodgers entered Game Four believing they’d finish one game from crossing the Jordan and ended up on the wrong end of maybe the single most berserk loss in World Series history.

All that meant was Kershaw pitching Game Five not to get to the Promised Land but to get to the Jordan’s banks after such a surreal throwback. Kershaw’s Game Five mastery got  them back to the banks. This time, Mookie Betts, Corey Seager, Austin Barnes, and the Dodger bullpen rowed them across in Game Six.

“Who knows how many times I’m going to get to go to the World Series?” Kershaw has been quoted as saying. “I know more than anybody how hard it is to get there.” He also knows a lot more than a lot of people forget how hard it really is to get across from the banks to the Promised Land.