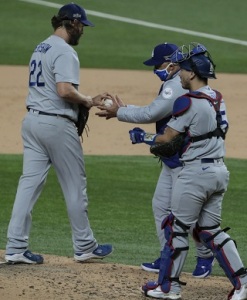 Too little, too late: Dave Roberts (masked) lifts Clayton Kershaw an inning late and what the Braves made ten dollars short.

The roll of managers who got their teams into hot water by doing what they shouldn’t have done, or failing to do what they should have done, is thick enough. Dave Roberts made it thicker after National League Championship Series Game Four Thursday night.

At the worst possible moment for his Los Angeles Dodgers, the day after the Atlanta Braves nuked them in Game Three, Roberts couldn’t bring himself to do what he had to do and get Clayton Kershaw the hell out of there. Fast. Before his lefthander left room for another Braves uprising.

It married Roberts to Charlie Dressen, John McNamara, Grady Little, Mike Matheny, and Buck Showalter on the roll of skippers who overthought, overmanaged, undermanaged, or brain-vapoured their way into big trouble if not big postseason infamy.

Kershaw’s postseason calamities are only too well known. They’re the only blemishes on a certain Hall of Fame career. It won’t make him a Cooperstown outlier—Bob Feller, Willie Mays, Joe Morgan, and Tony Perez don’t have sterling overall postseason resumes, either.

But Game Four is the one into which Kershaw’s manager walked him eyes wide shut and the Braves into the real beginning of a 10-2 triumph and one game from going to the World Series.

For five innings Kershaw stood his ground against Braves starter Bryse Wilson, who had only four more major league starts than Kershaw has Cy Young Awards. Wilson actually out-pitched Kershaw, but at the end of five the game was a one-all tie thanks to Alex Rios hitting one into the right field seats in the third and Marcell Ozuna hitting one into the left field seats in the fourth.

Roberts shouldn’t think about hitting the casinos any time soon. He knew Kershaw’s back might still have been a little balky after spasms forced Kershaw to be scratched from his scheduled Game Two start. He got five solid innings out of Kershaw on Thursday and should have been more than content with that.

But no. Roberts had to send Kershaw out for the sixth. “I just thought Kershaw was throwing the baseball really well,” the skipper told reporters after the game, “and there was no reason [to lift him]. I felt really good about it.”

How good did Roberts feel when Ronald Acuna, Jr. opened the Atlanta sixth with a hopper back to the mound but over Kershaw’s head that the evening’s Dodger second baseman, Kike Hernandez, coming from shortstop in the infield shift, threw past first baseman Max Muncy to allow Acuna to second?

How good did Roberts feel after Freddie Freeman promptly shot one right past first baseman Max Muncy into right for an RBI double?

How good did he feel after Ozuna shot one into the left center field gap for an immediate RBI double?

How good did he feel after relieving Kershaw with Brasor Graterol two hitters two late, seeing Travis d’Arnaud line out to right, but then watching Ozzie Albies single, Dansby Swanson shoot one down the left field line for a two-run double, and Austin Riley cue an RBI single up the middle?

How good did he feel after lifting Graterol for Victor Gonzalez and watching him walk Hector Camargo before Cristian Pache singled Riley home? Not to mention Ozuna leading off the seventh with another solo bomb, this one off Dylan Floro? Freeman and Ozuna whacking back-to-back RBI singles off Jake McGee in the eighth?

With nothing else out of the Dodgers offense but the bases loaded and one out in the seventh and only Rios’s sacrifice fly to show for it?

“I’m not going to take Clayton out after a weak ground ball and another ground ball off the bat of Freeman,” Roberts said. “I felt really good with Clayton at that point in time.”

Once upon a time an ancient Dodger manager named Charlie Dressen felt really good about spurning his curve ball specialist Carl Erskine in favour of fastballer Ralph Branca with Bobby Thomson—still less comfortable facing curve balls—coming to the plate in the bottom of the ninth of a third pennant playoff game.

John McNamara felt good about leaving his ankle-vaporised first base warrior Bill Buckner in the field for the bottom of the tenth in Game Six of the 1986 World Series, too. He wanted his shattered soldier out there when the Red Sox finally won the World Series again. How did that work out for him?

Mike Matheny felt great refusing to close The Book in Game Five of the 2014 NLCS and bring his closer Trevor Rosenthal into the bottom of the ninth—because it wasn’t even a St. Louis Cardinals lead, never mind a save situation. Travis Ishikawa felt even better turning on rusty Michael Wacha’s weak fastball and sending it to the top of Levi’s Landing. (This time, the Giants didn’t steal the pennant! The Giants didn’t steal the pennant!)

Buck Showalter felt comfy refusing to reach for his closer Zack Britton—with Britton’s 0.54 ERA/1.94 fielding-independent pitching/0.84 walks/hits per inning pitched—because the bottom of the ninth in the 2016 American League wild card game wasn’t a “save situation,” either. It left Edwin Encarnacion comfy enough to hit the three-run homer that sent Rogers Centre batshit nuts and the Toronto Blue Jays to the division series.

Boone himself felt cozy enough not to put Jose Altuve aboard with a free pass—with two out, George Springer on first, a gassed Aroldis Chapman somehow ahead of Altuve 2-0, and a spaghetti bat named Jake Marisnick on deck.  Altuve felt even cozier, blasting a two-run homer with the pennant attached off the back wall of Minute Maid Park.

Casey Stengel failing to set his 1960 World Series rotation so his Hall of Famer Whitey Ford could pitch three and not just two games? Gene Mauch panicking the Phillies out of the 1964 pennant? Darrell Johnson lifting Jim Willoughby in the 1975 World Series? Don Zimmer doghousing Bill Lee down the 1978 stretch?

Roberts may be paying for all of their sins.

And, he forgot 2019’s Joe Kelly was too vulnerable when pitching past a single inning, left Kelly in for a second inning in Game Five of last year’s division series, and watched him  load the pads for Howie Kendrick to slice salami and cut the Dodgers’ season off at the blast.

There was no defense for Dressen’s Dodgers, Little’s Red Sox, Matheny’s Cardinals, or Boone’s Yankees against a pennant winner; or for Showalter’s Orioles against a wild card game winner. The Dodgers haven’t lost the pennant yet, but Misteroberts’ neighbourhood is a nebulous one over which to guide neighbourhood watch.

Maybe we wouldn’t talk this way if Roberts’ Dodgers and those other teams found ways to win despite the mental lapses. Maybe we’ll stop talking this way for awhile if his Dodgers iron up and manage to win this NLCS. Maybe.

Maybe if the Dodgers remember how to hit when it matters in Game Five, we’ll stop talking about Roberts as a compromised bridge commander and the Dodgers as something of a deception. They’re lucre rich, farm-system sound, and as front-office brainy as it gets, but their continuing postseason futilities despite owning the National League West for eight seasons straight makes them resemble paper tigers.

They’ll have to make things happen in Game Five. If these Braves let them, that is. These Braves may seem like nice fellows, but they’re not inclined to be that generous.