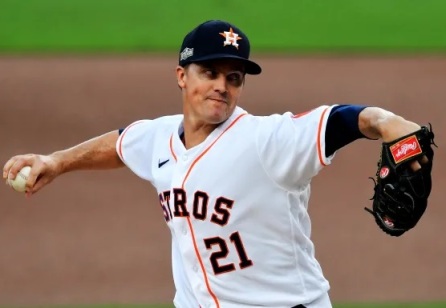 Greinke found what he needed when his skipper’s confidence found him when it was needed.

Once upon a time, stealing the pennant came to mean things like eleventh-hour surges at the end of the stretch drive. Or, off-field-based (and illegal) sign-stealing chicanery. (That means you, 1914 Philadelphia Athletics, 1940 Detroit Tigers, 1948 Cleveland Indians, 2017 Houston Astros, and 2018 Boston Red Sox.)

This time around, it may still mean the Tampa Bay Rays stealing the American League pennant by robbing the Houston Astros wide awake every time the Astros think a nicely-hit ball is about to send a run or two home.

But not quite yet.

Whatever you think about the Astros, they won’t just go gently into winter vacation. They didn’t muster up a jaw-dropping eleven-run first inning such as the Los Angeles Dodgers dropped on the Atlanta Braves earlier Wednesday. They didn’t have to. They needed just an extra home run and a managerial non-decision to live to play one more day at least.

This time, George Springer hit a tie-breaking two-run homer in the bottom of the fifth off Rays starter Tyler Glasnow and Astros manager Dusty Baker did an about-face rather than lift his starter Zack Greinke with first and second, one out, and white-hot Rays left fielder Randy Arozarena—whose two-run homer off Greinke in the top of the fourth tied the game in the first place—checking in at the plate in the top of the sixth.

Baker had his options just about ready to roll. He had Cristian Javier and Ryan Pressly throwing in his bullpen. And when he went to the mound, he talked to Greinke some but to catcher Martin Maldonado more, and Maldonado stood up for his pitcher just when Greinke needed it the most.

Greinke didn’t forget Game Seven of last year’s World Series. That’s when then-skipper A.J. Hinch noticed he’d run out of fuel and lifted him for Will Harris, his best relief option. To Greinke it meant lack of confidence, never mind that he’d been battered by the Rays in that division series, slapped silly by the New York Yankees in that ALCS, and taken for a home run by Washington’s Anthony Rendon before walking Juan Soto in that Game Seven seventh.

That was then: Greinke came out for Harris and Howie Kendrick ripped what looked like Harris’s unhittable cutter for a two-run homer off the Minute Maid Park foul pole with the Astros’ next-to-last Series hopes attached. This was Wednesday night: Baker turned around and returned to his dugout.

Greinke struck Arozarena out on a check swing. He got help from Astros shortstop Carlos Correa cutting off a hopper from Rays first baseman Ji-Man Choi that might have left room for left fielder Manny Margot to score, if Correa didn’t reach it on the short outfield grass and knock it down.

Then Greinke struck out Michael Brosseau—whose late home run against the Yankees got the Rays to this ALCS in the first place—with a changeup that dove off a cliff just before Brosseau’s bat could give it a kiss. Kiss the Rays’ deepest threat of the night goodbye. Then turn the game over to the pen.

“My plan,” Baker told reporters after the 4-3 Astro win, “was to take him out, but I wasn’t really convinced of my plan. Sometimes you look in the guy’s eyes, sometimes you listen to the catcher, and you do what you gotta do.”

Especially for a seventeen-year veteran whose arm was ailing and inconsistent all postseason long, until he found the best of his late-career self when he needed it the most Wednesday night, putting his best off-speed pitches into a Mixmaster and cranking no higher than cookie-mixing speed.

He also vindicated Baker, a very veteran manager who’s not allergic to the analytic game but who’s lived as much by his gut as his brain and has often been caught with his pants down when his gut gets betrayed by circumstances far beyond his control.

Baker was one game from yet another tsunami of second-guessing when Greinke justified his gut Wednesday night. The skipper isn’t all the way through the turbulence just yet. But for once in his life Baker read his players and tea leaves right. He may yet have a few sharp readings left in him before this set’s over. May.

If baseball’s the game of inches, Greinke and the Houston pen made sure the Rays didn’t get the inches that would have mattered. Not that the Rays bullpen was caught sleeping. They matched shutout innings with the Astros’ bulls until Adames’s double off Pressly, brought in to close things out after Javier walked Choi to open the ninth. And the Rays used two bulls who weren’t exactly considered among their A-list stoppers.

Winning it 4-3 made it that much more precious to the Astro core who may yet play their last games together in this set. One Astro win doth not a Rays collapse make, and the Astros are smart enough to know they’re in for a continuing fight, but don’t fault them for savouring Game Four a little extra.

Especially on a night Altuve’s first-inning launch over the left field fence and Springer’s fifth-inning flog meant the eighteenth lifetime postseason bombs for each man. Matching them to Hall of Famer Reggie Jackson and putting them one behind Hall of Famer-to-be Albert Pujols in the divisional play-era postseason rolls.

Not to mention a night on which Altuve’s apparent and frightening case of the yips at second base took its first steps toward potential dissipation, Altuve handling a pair of none-too-tough chances and throwing without the ball deciding on its own to go to the enemy side.

“Those are things that happen in baseball,” Altuve said, facing the press for the first time all series long. “I left that in the past and showed up today ready to play some baseball and help my team.” The question then becomes whether Altuve can leave those game-changing mishaps in the past. He sure thinks so. Springer’s pretty sure he knows so.

“He prides himself in every aspect of the game,” the center fielder said. “When he believes that he failed or let the guys down, he takes it to heart. But one of the most impressive things about Jose is how he can clear his head and contribute in all aspects of his game. I know the head he has on his shoulders. He’s our leader and always has been.”

That comes from the guy who watched Altuve start Wednesday night’s scoring with a second first-inning solo bomb in as many days and his third in the series, swat an RBI double in the fourth, and tell himself, “You’re not taking care of all the scoring, bro,” before driving a 2-1 service down the left field line and into the third patio up the Western Metal Supply Co. building.

The Astros still had to wrestle for their win. Even if the Rays didn’t have to get their acrobats on, they still turned four double plays on the evening and rapped out seven hits to the Astros’ nine. They’re still out-pitching the Astros by a few hairs, finishing Game Four with a team 2.31 ERA to the Astros’ 2.65.

Most likely, the Astros send Framber Valdez out to start Game Five, likely against the Rays’ Blake Snell. No announcements were made at this writing, and Rays skipper Kevin Cash would have no compunction at all against going to a bullpen game the Astros aren’t positioned or built to deliver just yet.

But, as the Beatles also sang once upon a time, a splendid time is guaranteed for all.