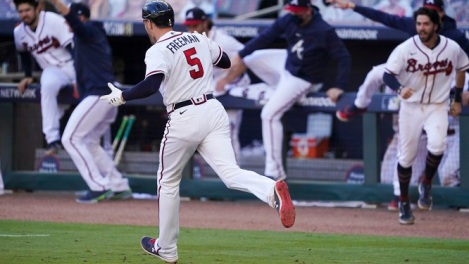 Freddie Freeman finally drives in the only run of the game . . . in the bottom of the thirteenth.

Put Commissioner Nero and his itch to fix what isn’t broken plus his allergy to fixing what might be to one side. The second loveliest word pair in the English language is “extra innings”—right there behind “play ball!” The Cincinnati Reds and the Atlanta Braves certainly believed in lovely word pairs Wednesday afternoon.

We just didn’t think they’d take it to a 12.5 inning shutout extreme while they were at it, before the Braves finally won 1-0 in the bottom of the thirteenth.

Neither did we think fourteen pitchers would combine for 37 strikeouts that only began with Braves starter Max Fried’s five in seven innings and Reds starter Trevor Bauer’s 12 in seven-and-two-thirds. That would mean twelve relief pitchers combining for 25 strikeouts.

It also meant history’s first Show postseason game that ever went scoreless for 12.5 innings. Not to mention Bauer become first in Show ever to throw seven-plus shutout innings with no walks and twelve or more strikeouts.

Now, Fried and Bauer were masterful. No question. But then they were also smart enough to exploit a pair of teams whose diets are dominated by long bombs. Teams who also spent six part of their first National League wild card game trying to hit eight-run homers and half a dozen parts running the bases like Dick Van Dyke trying and failing to avoid somersaulting over the ottoman after he’s only three steps through the front door.

Try not to miss the free cookie on second base to start each team’s extra half inning, either. It’s not part of the postseason, but still. Until Freddie Freeman knocked home the winning run in the bottom of the thirteenth, these Reds and these Braves spent the day proving that if they did have the cookies they still would have stranded them.

Except for the top of the tenth and the bottom of the eleventh in Truist Park, neither side could get anyone home even if they’d paid ransom remands. The Reds even stranded the bases loaded in the eleventh and the thirteenth. Atop an afternoon aboard which the Reds went 1-for-12 with runners in scoring position and the Braves went 1-for-10 likewise.

Freeman’s was the one that counted. With Amir Garrett on the mound for the Reds, and pinch runner Cristian Pache plus Ronald Acuna, Jr. aboard with one out, he lined a slightly hanging slider into right center field far enough for Pache to hit the plate unmolested.

For the Braves first baseman who prayed COVID-19 wouldn’t get him an early transfer to the Elysian Fields before the irregular season opened, it had to be the single most satisfying hit of his career to date.

It was the least Freeman and his mates could do after reliever Shane Greene left successor A.J. Minter with the bases loaded and one out in the top of the thirteenth. Thanks large for lunch, you could imagine Minter thinking as Aristedes Aquino checked in at the plate, I was dying for a jam sandwich, anyway.

Aquino wrestled Minter to 1-2 including four foul-offs before Minter lunged for and missed a changeup that broke so far low and away Aquino would have needed a search party to make serious contact. Then Minter served Jose Garcia just enough to hit a grounder up the middle that forced Mike Moustakas out for the side.

Memo to the Reds and the Braves hitters: When beasts like Fried and Bauer are on the mound, it’s wise men who heed the wise advisory, “Please don’t feed the animals.”

And, memo to everyone banging Reds manager David Bell for not putting Freeman aboard with a base open and only one out—Freeman may be the National League’s Most Valuable Player in waiting, but he’s far less effective against lefthanded pitchers (.250 batting average against portsiders this year) than righthanded. (.341.) And Garrett this year kept the lefthanded swingers to hitting .043 against him.

Lurking behind Freeman? Righthanded Marcell Ozuna, his 1.067 2020  OPS, and his penchant for demolishing lefthanders like condemned buildings and righthanders close enough to that. (.345 batting average against lefthanders this year; .333 against the starboard arms.) You want to pitch to that with the bases loaded, instead of chancing your man luring Freeman into a double play? Cream Puff the Magic Dragon Ozuna ain’t.

So Bell made the only move he could have made and left his lefthander in to face the lefthanded. You give Freeman all the credit on earth for jumping Garrett’s hanging slider. For better or worse there are times when doing the right thing isn’t as right as the other guy doing it.

Better that Reds fan is frustrated by Adam Duvall and Austin Riley collaborating on nailing Nick Castellanos at third in the sixth, when he tried taking the extra base on a single and Duvall thre the kind of strike requiring nothing but the best tag Riley could get down on Castellanos.

Or, by Aquino channeling his inner Little Leaguer with two out in the seventh, getting himself canned in a rundown between third and home. To think he reached base in the first place after a swing and a miss that dropped him on his can before singling to left with one out.

Now the Reds get to play Game Two hoping they can drop Ian Anderson and the Braves on their cans, instead of ending up singing, “It was a new day yesterday/but it’s an old day now.”