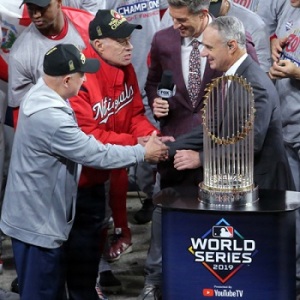 Sheinin revealed Manfred saying this pandemic season’s sixteen-team postseason “is likely to remain beyond 2020,” with “an overwhelming majority” of the owners endorsing it before the coronavirus world tour yanked baseball over, under, sideways, down.

“I think there’s a lot to commend it,” Sheinin quoted Manfred directly, “and it is one of those changes I hope will become a permanent part of our landscape.”

Back in February, Manfred got himself into a jam, dismissing thoughts of nullifying the Houston Astros’s illegal-sign-stealing-tainted 2017 World Series win, when he dismissed concurrently the World Series trophy itself (its official name is the Commissioner’s Trophy) as “just a piece of metal.” (His swift apology only helped a little.) Now he’s threatening to make the trophy exactly that, and not in rhetoric alone.

Last Friday, you may remember Sports Illustrated writer Emma Baccalieri saying a pandemically truncated baseball season such as this might make “tolerable weirdness” such as a losing-record team playing for a championship, well, tolerable. “In a non-pandemic-restricted year,” she said, “‘tolerable weirdness’ shouldn’t be the bar.”

Manfred has crossed the line into intolerable weirdness. It’s not that baseball wasn’t playing chicken at that line when it went to the wild card format in the first place, or when it added the second wild card in the second place. Playing chicken is one thing. Manfred wants the clucking birds to run roughshod over “our landscape.”

Baccalieri’s colleague Stephanie Apstein suggested in the same piece that having even one losing team in the postseason just might force Manfred to see how patently ridiculous the idea is in the first place. Apparently, the more ridiculous something is, the more stubborn Manfred becomes on its behalf.

Last Friday, the Astros—already trying to play through the continuing slings and arrows of Astrogate’s aftermath and the injured list—plus the Colorado Rockies and the Milwaukee Brewers sat within real wild card reach with records below .500 in the wild card standings. When I sat down to write this morning, the Astros had a wild card claim at precisely .500 while two National League teams (the San Francisco Giants, the St. Louis Cardinals) held claims with records one game below .500.

If the truncated season ended last night, those three teams would enter the postseason as wild cards. One .500 team and two losing teams. You tell me what would be wrong if that was the case at the end of a full, unimpeded regular season.

If the Show wanted to do what it could to let teams make up for the revenues lost because of COVID-19 shutting down spring training and the first almost half the regular season, you got that. But does Manfred really want to give .500 or below teams the right to enter baseball’s championship round after a full regular season that’s supposed to leave the best teams and no others going there?

Last Friday I ran down ten wild card era teams who entered October holding wild cards and ironed up going all the way to World Series wins. Some of them remained dubious even holding the trophy, and some of them actually made history to reach the Promised Land. (That would be you, O actual or alleged curse-busting 2002 Anaheim Angels and 2004 Boston Red Sox.)

Every one of those teams at least got there on winning records. Even their own fans knew in their hearts how ludicrous it was to have enjoyed the thrills, chills, and spills of watching their teams and others fighting to the last breath to see who’d finish . . . with the best second-place records in the game.

What’s Manfred looking for, really? The thrills, chills, and spills of a fight to the last breath to see who’d finish . . . as the best of the Show’s losing teams? Does he really think the good of the game is that powerfully defined by making money for the owners? Does he really hold the players in contempt so deep that he’d let them claim greatness when greatness isn’t required to have even the chance at a World Series title?

And where’s the Major League Baseball Players Association? Joining the owners in approving the coming postseason “bubble” is one thing. Why aren’t executive director Tony Clark (himself a former player), his board, and his thirty team player representatives standing up on their hind legs, athwart Commissioner Nero who fiddles while burning their game, yelling “Stop?”

Wasn’t the small epidemic of tanking teams bad enough without leaving them even more room to care little to nothing about competition on the field? Does anyone really think those owners with the tank mentality are going to shape up, re-discover what their fans really want to pay for, and build truly competitive teams knowing they don’t have to try all that hard to finish in . . . eighth place?

What about those owners (yes, they do exist) who don’t think like tankers? Who pour their dollars and souls into building and re-building competitive teams and systems for the long race year in, year out? Who field teams who finish seasons on top in their divisions? Who’d still have to run a small gamut of not-quites and not-belongings for the right to play for a world championship on behalf of which they busted their fannies all season long?

How useless it now feels to argue as I’ve argued for a very long time—that the wild cards must be eliminated on behalf of restoring genuine baseball championship, and that if we must have three-division leagues there’s a sensible and sane way to align a proper postseason.

That way would be to have the leagues’ division winners with the best regular season record getting round-one byes, while the leagues’ other two winners play best-of-threes, with the winner of those meeting the bye teams in League Championship Series returned to their original best-of-five formats. Keeping the World Series as a best-of-seven and leaving, ultimately, little to no doubt about the legitimacy of the team that reaches the Promised Land.

How useless, too, it now feels to argue that that would likely cure the number one issue that really dogs baseball’s postseason: over-saturation, the prospect that fans by their radios, in front of television sets, in front of Internet computers, can be exhausted by too much of a good thing.

I didn’t mind some of the rule changes the pandemic truncation invited. I’m all in on the universal designated hitter; few things warm my heart more than not having to see a lineup slot that hit .131 with a .161 on-base percentage all through the 2010s wasted on bats making Mario Mendoza resemble Mickey Mantle. The extremely occasional thrill of a pitcher hitting a home run isn’t. worth. it. Not even for the next Bartolo Colon.

I can also live very nicely with doubleheaders of seven-inning games each. (So can the players, seemingly.) The only problem I have with the idea is why it took over a century to consecrate.

I don’t like the three-batter minimum for relief pitchers. I still notice how many managers forget that minimum and still leave the poor saps in even if they’re already getting killed. Poor saps such as St. Louis righthander Jake Woodford. He got pried for two more runs tacked onto Cardinal ace Jack Flaherty’s jacket Tuesday night and had five of his own battered out of him on the way to the Brewers destroying the Cardinals 18-3. And don’t get me started on the free cookie on second base each team gets in each extra inning.

But I’d rather be stuck kicking and screaming with those than to see even one normal regular season in which half of each league gets to enter the championship rounds no matter how little their season records argue for their worthiness. A .500 or a sub-.500 team entering the championship round consecrates incompetence as virtue.

That’s something baseball’s mal-competent Commissioner Nero, and those owners agreeing with his intolerable weirdness, appear clueless to comprehend.