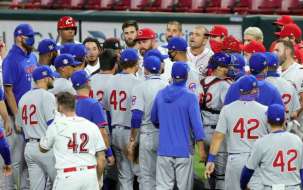 “Of course our guy didn’t throw at your guy’s attic on purpose. And of course we’ll take that polar beach club off your hands for twice the market value!“

A little Saturday rough stuff between the Chicago Cubs and the Cincinnati Reds may or may not be surprising. But is it all that surprising that Angel Hernandez’s umpiring crew sent it near nuclear? Not Hernandez himself, for a change, but still.

The Cubs and the Reds played a doubleheader in Great American Ballpark. Thanks to his performance in the Cubs’ first-game win (3-0), Anthony Rizzo wasn’t exactly the Reds’ favourite person on the day. Neither was Cubs starting pitcher Yu Darvish, who was so effective he could (and did) drop his glove while delivering and still throw a strike.

But in the top of the nightcap’s fourth, rookie Cincinnati relief pitcher Tejay Antone greeted Rizzo leading off with a pitch straight over Rizzo’s head. Rookie though he may be, Antone had all the right moves at the ready, looking at his pitching hand immediately as he turned to his right.

Of course the ball just slipped away off course against the guy who took the Reds deep twice in the first game. And of course you can have that Antarctican beach club for twice the market value. Rizzo’s reputation for plate crowding doesn’t fly here, either. If you’re going to push a batter back off the plate, you’re going to throw inside and tight, not upstairs above the attic.

“We’ve played against the Reds a long time and they do like to move my feet,” Rizzo told reporters after Cubs relief pitcher Craig Kimbrel wild-pitched the winning Reds run home in the bottom of the seventh.

It’s just part of their reports–it’s been for years. I don’t think any pitcher would purposefully throw at someone’s head. I give the benefit of the doubt to every pitcher, especially Antone. He’s a rookie. He’s been throwing really well. The pitch inside was definitely for a purpose. It’s just, it’s at the head and that’s scary stuff.

No sale. Both dugouts barked. Hernandez’s ump crew confabbed as Antone stepped into his errant-hand routine around the mound. Home plate umpire Nic Lentz handed warnings to both sides. Cubs manager David Ross, who wouldn’t have paid a wooden nickel for the pitch-slipping plea, was distinctly unamused.

Ross came out of his dugout at first, returned, then came back out after Lentz handed the warnings down. “I thought our dugout got pretty animated and the umpires stepped in and issued warnings, which I didn’t understand,” Grandpa Rossy told reporters later. “We hadn’t done anything from our perspective. A young man tried to take things into his own hands and send a message, and then it kind of escaped from there.”

With the Cubs dugout still bristling over Antone’s attic pitch to Rizzo, not to mention Antone still bristling quietly over having exchanged a few “grunts” with the Cubs previously, Ross and his pitching/catching/strategy coach Mike Borzello were ejected. It’s the first ejection in Ross’s managerial career. Welcome to Angel’s Hell, Gramps. You’re not supposed to say anything but “three bags full, sir” to the crew of the legend in his own mind.

Then the Reds got a taste of both theirs and Hernandez’s own medicine in the bottom of the fourth. Cubs reliever Adbert Adzolay zipped Reds center fielder Shogo Akiyama up, in, and tight. You’d have had to be a U.S. postmaster general not to know that Adzolay wanted to send the Reds a little return message about going upstairs against the guy who took you downtown twice in the first game.

That prompted veteran Reds leader and designated hitter for the game Joey Votto to bark at the Cubs, Kyle Schwarber in particular. Cincinnati skipper David Bell returned to the field for another conversation with the umps, during which Rizzo hollered at him from first base, which lured Votto and Reds outfielder Jesse Winker out to have it out with Rizzo.

First base umpire Dan Bellino tried and failed to convince Votto and Winker to knock it the hell off, then he invited both to kindly remove themselves from the game, at which point—pandemic protocols be damned—both benches and bullpens emptied to the field, although nobody even thought about throwing a punch.

“I went over to get an explanation for what happened,” Bell told reporters afterward. “And then I believe Anthony Rizzo started walking towards me and yelling at me,” Bell said. “I don’t know what he was saying, it didn’t really matter to me. And at that point, a couple of our players jumped over the railing and the umpire just started throwing everybody out of the game. Not everybody, but Jesse Winker, Joey Votto and myself.”

“Having each other’s backs and the Reds and all their guys and David Bell are going to have each other’s backs and we’re going to have our backs,” said Rizzo, who speaks fondly of Bell otherwise from Bell’s days as a Cubs infield coach. “That’s what happens when you’re competing anytime through baseball, but especially this year when it’s all heightened and you can hear every little thing.”

The Twitterverse erupted with a round of brickbats against Hernandez as the leader of the crew, but in absolute fairness this was one time when Hernandez himself didn’t jump the first bullet train to make himself the object of everyone’s attention. That’s about as far as absolute fairness should go, thanks to a time-honoured precept that when you lead you take responsibility for what your subordinates do, for better or worse.

Including making the headhunters captured by the game the story of the day, instead of Darvish’s virtuosity on the mound in the first game. Or even the hapless and once-formidable Kimbrel’s ninth-inning nightcap disaster, when he was brought in to try saving a 5-4 Cubs lead and should-have-been win. Oops.

The good news: Cardiac Kimbrel struck Mike Moustakas and Jose Garcia swinging, back to back, Garcia especially on one of the filthiest curve balls Kimbrel’s thrown in recent times. The bad news: That strikeout pitch escaped not just Garcia’s bat but one and all around and behind the plate, enabling Castellanos to score the Reds’ winning run.

Too-vivid reminders of how Kimbrel, formerly one of the most automatic closers in the Show, kept the crash carts on red alert during the 2018 Boston Red Sox’s postseason run even when credited with saves. The poor man threw four first-pitch strikes out of his six batters but only three of his eleven total strikes were called and his earned run average now matched a ten-dollar bill.

“We’re behind him every single day,” Rizzo said of Kimbrel. “Every time he comes to the mound, we’re behind him and have full confidence in him. He’s Craig Kimbrel. He has his resume for a reason.” That door swings both ways, unfortunately.