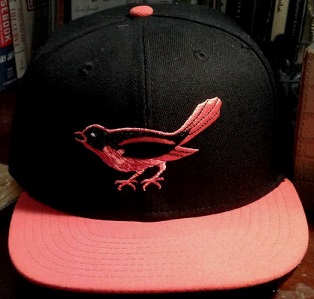 Whichever era’s gear you like, it looks safe to be an Oriole fan again. So far. All things considered.

I’m not seeing things, really, I keep telling myself. So do most of you who aren’t part of the fan base. So, probably, do most of those whose allegiance—in cardboard cutouts this pandemic season, unfortunately—anchors at 333 West Camden Street in Baltimore.

Where the Orioles have suddenly re-graduated themselves from birds of prey, as in prey for the other guys, to the American League East’s second-best record behind the beasts of the south Bronx and fourth-best record in the entire league.

They didn’t do it against their fellow presumed cream puffs, either. They’ve beaten the world champion Washington Nationals four out of five times, and the Philadelphia Phillies and the Tampa Bay Rays both three out of three.

They’re also one of the Show’s most prolific road shows, too, even in this coronavirus-nourished Quiet, Please! Alfred Hitchcock Presents Dimension X Minus One Fella’s Family of a season—nine road games, eight wins.

They’ve even had a six-game winning streak and they’ve won seven out of eight, including those four wins dropped on the Nats pending today’s skirmish in Camden Yards.

All that despite their pitching being near the bottom third of the league’s team ERA pack and near it in team pitching strikeouts while being just about dead center for surrendering the big flies.

It’s enough to make even generic baseball collectors reach for their Oriole hats of any era, plop them atop their heads almost daily, and wonder what strange new feats of derring-do await from a team who’d turned too profoundly into the AL East’s feats of derring-don’t even think about it.

Maybe the only more surprising ensembles in the Show right now are the Miami Marlins, who didn’t let a little thing such as practically the entire team waylaid by COVID-19 positives stop them from remaking/remodeling on the fly and entering Sunday afternoon with the number five winning percentage.

Most fish get the ick and croak. These Fish either got or laid dormant the coronavirus, lost what seemed like half their first-third of the season . . . and went from the guppies of the National League East to its barracudas. Just pray that they don’t begin behaving like real barracuda and start eating their young. Oops. Maybe the Marlins already did that—their average age is 29.4.

Come to think of it, the Marlins won nine games so far entering Sunday, and four of them came against . . . the Orioles. With this season’s cockamamie-looking playoff plan, it may not be thinking two thousand light years from home to imagine these Birds of Prey against those Flying Fish. It might be jarring, it might seem to threaten the natural order of things, but it may not be all that surreal.

So what went on in Camden Yards on Sunday afternoon? A little comic relief from Nats manager Dave Martinez, for openers, objecting to a pitch call with an extremely emphatic Horse[spit]! Horse [fornicating] [spit]! Didya hear me? in the bottom of the second. (O Vin Scully, where is thy sting?)

Orioles catcher Pedro Severino said, “That’s what you think,” with two aboard in the bottom of the sixth, catching hold of a Scherzer fastball practically down the chute and sending it over the left field fence. An inning later, Satlander found the screws on Scherzer’s two-out, 2-1 repeat changeup and repeated what he did in the first, to practically the same section of unoccupied real estate.

Tied at five. If the Orioles are really playing over their own heads, they weren’t going to let even Mad Max take them without a fight.

Oops. With two out and Juan Soto on second in the top of the eighth, Oriole third baseman Rio Ruiz threw Kurt Suzuki’s should-have-been inning-ending grounder wild enough to let Soto score and Suzuki have first and then second on the house.

That was no time for surprise generosity, Orioles. Unless it wasn’t that much of a surprise. The Orioles entered Sunday fifth in the American League with fourteen errors. Well, nobody’s perfect, and the Orioles are still trying to get used to winning again, however surrealistic the truncated season.

Heavy sighs of relief, mostly from the Oriole dugout, unless someone figured out a way to send the canned crowd sounds through any cutouts in the park. Oriole reliever Paul Fry got Nats pinch-hitter Eric Thames to pop out to shortstop Jose Iglesias for the side. Staying within one run was child’s play.