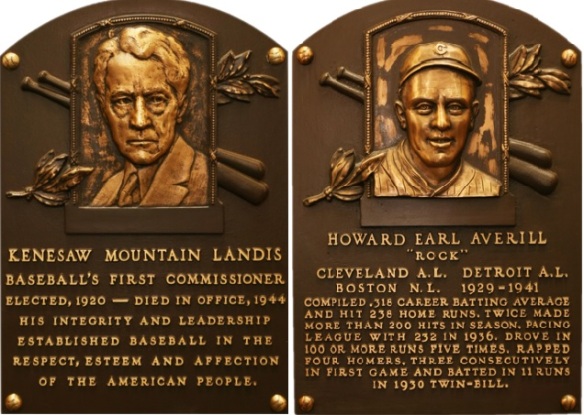 When Earl Averill demanded a piece of his sale price from the PCL to the Indians, Landis—wrong without integrity about much—actually sided rightfully with the Hall of Fame outfielder.

The current discussions about whether to replace Kenesaw Mountain Landis’s name from the Show’s Most Valuable Player awards aren’t out of place. (My view is: yes, replace it.) History deems baseball’s first commissioner a tyrannical autocrat who behaved purely for the owners’ good and enforced baseball segregation.

But Landis stood squarely on the side of the angels at least twice during his reign, and those should not be forgotten, either.

A kid from Snohomish, Washington named Earl Averill made the Pacific Coast League a personal playpen from 1926-28. The San Francisco Seals outfielder hit for a .342 traditional batting average and a .538 slugging percentage, with 79 home runs including 36 in 1928.

That caught the eyes of the Cleveland Indians, and the Tribe opened the checkbook and bought Averill from the Seals for $50,000, agreeing that Averill didn’t have to report to them until after the PCL pennant race ended. Averill was normally a quiet type whose passions included flowers and animals. But the future Hall of Famer was savvy enough to flinch when he read about the sale in a newspaper.

Until I read The New Bill James Historical Baseball Abstract I had no knowledge that Averill actually asked how much of that sale price he could expect to receive. James didn’t say whether or not either the Seals or the Indians laughed their fool heads off over that question.

What he did say was Averill’s answer: translating loosely, wanna bet? The outfielder decided he wasn’t going anywhere no matter how ardently the Seals and the Tribe determined to convince him otherwise. The debate reached Landis’s eyes and ears, and Landis must have surprised anyone privy to his thinking with his response.

The commissioner agreed with Averill. He actually believed Averill wasn’t out of line demanding a piece of that $50,000 sale price. Landis suggested, as James paraphrased, “that baseball should adopt some sort of legislation by which, whenever a player was sold, the player himself would get a cut of the proceeds.” Say what?

Perhaps needless to say, the suggestion went the way of the cylinder phonograph. You could only imagine the major league owners of the time demanding Landis reveal what was in his tea in that moment because they wanted to get swacked, too.

The impasse between Averill and the Indians ended when the Tribe paid him a $5,000 bonus and signed him to a salary somewhat higher than the standard major league rookie salary of the time. He went to Cleveland and launched the Hall of Fame career compromised when a back injury in a 1937 game wrecked his formidable swing.

Bad enough, perhaps, that Landis’s suggestion went nowhere fast enough, but worse was that it never entered the mind of his successor four times removed. Bowie Kuhn so despised Oakland Athletics owner Charlie Finley that he let it get in the way of sound judgment and put a needless virus into baseball’s economic system.

Quaking over the Messersmith-McNally ruling that ended reserve clause abuse and ushered in free agency, Finley fumed when three of his top players—pitchers Vida Blue and Hall of Famer Rollie Fingers, plus outfield star Joe Rudi—refused to sign 1976 contracts lacking no-trade/no-cut clauses, the issue that prompted Andy Messersmith to pitch 1975 without a signed Los Angeles Dodgers contract in the first place.

When Finley brought those three plus third baseman Sal Bando to his sale floor in June 1976, it provoked a bristling crowd of buyers. When the word reached Kuhn at Comiskey Park, where he was watching the Chicago White Sox host the Baltimore Orioles, Kuhn said, wanna bet? He voided the sales, claiming they’d be “devastating” to baseball’s “reputation for integrity.”*

Players too well accustomed to front-office duplicity probably laughed themselves into headaches. Especially when Kuhn continued, “If such transactions now and in the future were permitted, the door would be opened wide to the buying success of the more affluent clubs, public suspicion would be aroused, traditional and sound methods of player development and acquisition would be undermined, and our efforts to preserve the competitive balance would be gravely impaired.”

To James, Kuhn closing Finley’s version of Toys ‘R’ Us “was an ignorant, bone-headed, destructive policy which had no foundation in anything except that Kuhn hated Charlie Finley and saw that he could drive Finley out of the game by denying him the right to sell his [star] players.”

What Kuhn should have done, if he had been thinking about the best interests of the game, is adopt the Landis policy: rule that players could be sold for whatever they would bring, but 30% of the money had to go to the players. Had he done that, the effect would have been to allow the rich teams to acquire more of the best players, as they do now. But this policy would have allowed the rich teams to strengthen themselves without inflating the salary structure, and would have allowed the weaker teams, the Montreal-type teams, to remain financially competitive by profiting from developing young players.

If Kuhn adopted the Landis idea, it would have put $300,000 into Rudi’s, Fingers’s, and Blue’s pockets immediately. Finley would have screamed blue murder over getting a measly $2.1 million for only as long as it took him to put it in the bank. His three toys would have earned more before playing a single 1976 inning than either of the three did in 1975.

Now we’ll never know how much less the salary structure might have inflated in due course, if Kuhn hadn’t voided the Rudi-Fingers-Blue sales while imposing a concurrent cap of $400,000 on straight cash deals, meaning teams in need couldn’t sell their stars for big money while keeping their bargains on the sales floor for comparative pocket change.

When Averill was elected to the Hall of Fame in 1975, the Earl of Snohomish looked foolish for criticising the Hall in his acceptance speech because of how long it took him to get there. He still looked less foolish than Kuhn did because sticking it to Finley overrode the good of the game.

Somewhere, wherever he was in the great beyond, Landis—who was absolutely on the right side, for once in his baseball life—must have shaken his head in dismay while calling for as stiff a drink as possible.

Some portions of this essay have been published previously.—JK.

* Among other things, Dodgers owner Walter O’Malley pressed Kuhn against the Rudi-Fingers-Blue sales. This makes a travesty of the integrity of baseball. Pennants are not to be bought! read notes historian John Helyar ascribed to O’Malley in the moment.

So said the owner who bought longtime Dodger nemesis Sal Maglie from the Indians in May 1956—a deal that helped make the final Brooklyn pennant possible. Apparently, buying pennants in June was dangerous, but buying one in May was something else entirely.

By the way, the law firm that represented the National League at the time of the Maglie purchase included a young lawyer named (wait for it!) Bowie Kuhn.