Hall of Famer Mike Piazza runs out his larger-than life, late-game, post-9/11 two-run homer that electrified a city and a country. Who’ll be a similar baseball hero post-coronavirus pandemic quarantine?

The discussions are on for when and whether major league baseball will return this year. Some of them trigger bristling suggestions that the owners want to use this to suppress player pay further, via a 50-50 revenue split that might, admittedly, mean lower takes for the owners, too.

Others trigger equal suggestions that the players—who already agreed (in March) to play with pro-rated 2020 salaries when they can play again this year—want someone to remind the owners they had a deal. If necessary, a reminder by way of a bat brought down onto their heads.

And most of those discussions trigger concurrent thoughts, debates, and analyses over just how to keep the players, the team personnel, and the ballpark workers and operators safe when the major league games return, wherever they’re played.

But let’s put those to one side for now and think of something else: If and when the Show goes on again, and whenever fans can and will be allowed back into the stands reasonably, who’s going to be the coronavirus’s Mike Piazza?

We take you back to 21 September 2001, ten days after the 9/11 atrocity, and New York City’s return to baseball by way of the Mets hosting the Atlanta Braves at since-departed Shea Stadium.

To Piazza batting in the bottom of the the eighth against Steve Karsay, with one out, one on, and the Mets down 2-1. To Piazza turning on Karsay’s service just off the middle of the plate and sending it far enough over the center field fence that it banged off the second tier of a three-level television camera scaffold.

To the ballpark whose packed Friday night crowd included 9/11 responders and their families exploding in unapologetic emotion from the moment Piazza’s blast ricocheted off the scaffold.

Four innings earlier, Piazza scored the Mets’ first run following his one-out double to right center field, after Robin Ventura singled him to third and Tsuyoshi Shinjo brought him home with a sacrifice fly. That tied the game at one, but the Braves made it 2-1 in the top of the eighth when Brian Jordan doubled home pinch-runner Cory Aldridge.

“If there was any time to give up a home run, though I obviously didn’t want to, that was the time,” Karsay himself would remember of Piazza’s surrealistic blast.

Piazza had been somewhat in the thick of 9/11’s immediate aftermath, doing what he could along with several teammates and their then-manager Bobby Valentine to help clean up, boost morale, and make sense of the atrocity, while baseball ceased for the first ten days following the attacks.

“I can’t describe that week,” Piazza remembered to MLB Network around the time of his Hall of Fame induction in 2016, “and I can’t describe what it was like to come back and play, because I don’t remember any of it, in a way.”

Not even the moment captured impeccably by a New York newspaper photographer, Piazza sitting on the rooftop of his apartment building with a view of the empty World Trade Center area at sunset, gazing toward the empty region as if still unable to believe what he no longer saw, knowing how it got that way in the first place. 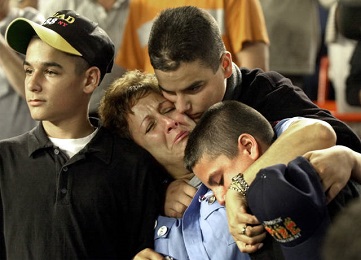 Carol Gies and her three sons at Shea Stadium during pre-game ceremonies honouring fallen 9/11 responders such as her firefighter husband, Ronald.

Piazza may not have been able to remember but fans and first-responder families wouldn’t forget, including Carol Gies, whose firefighter husband Ronald died in the 9/11 atrocity. “It was a day I will never, ever forget,” she said. “It was a decision, should we go, shouldn’t we go, should we go. We were terrified because here it is, a ball field, and the terrorism and stuff, and we decided as a family that it was some place their father, my husband, would want us to be.”

Despite their pennant race grapple, Valentine remembered the Mets thinking not so much about a competition with their National League East rivals but that the game itself “was so much bigger than anything I’ve ever been part of before.” Today Valentine is the athletic director of Sacred Heart University and active in coronavirus relief and aid efforts.

“It was just inevitable that something really special was happening,” he said of just playing the game. Even he couldn’t predict what would happen when Piazza swung on 0-1 in the eighth.

One of Piazza’s fellow Hall of Famers played third base for the Braves that night. “That’ll be a game that’s etched in my memory forever,” said Chipper Jones in 2012.

You’re talking about two heated rivals. We didn’t necessarily like each other all that much back then. And we got together before the game, we came together grown men shaking hands, giving hugs. I think we all as Braves knew that night we were in trouble, because we’re not only playing, you know, a very good baseball team, but you just had the feeling that God and every other baseball god was on New York’s side that night.

The matinee idol, Mike Piazza, ends up hitting this storybook homer that sent everybody home feeling great, feeling wonderful. We’d done our jobs as baseball players, to entertain people, but we had gone, I feel, above and beyond just the normal day’s work, and we owed it to the city of New York and the northeast United States to help heal a little bit.

Police, fire, and paramedic bagpipers marched from the fence toward the infield before the game, as the Mets and the Braves lined up along the base lines. “I heard the bagpipes,” said Piazza, whose tears were captured on camera, “and I lost it. I remember looking up and praying to God saying, ‘Lord, please give me the strength to get through this’.”

The Lord obviously gave him a lot more strength than he asked.

Today’s players, more players than you think, do what they can with whatever they have in their home regions, from donating food to donating dollars and even time as the coronavirus continues its strange and terrifying journey. A nation that closed ranks in a classically American can-do spirit following 9/11 now struggles to do likewise around the current pandemic.

“The post-9/11 American esprit de corps did not last forever, but it lasted for better than a year,” writes Jonathan V. Last, the executive editor of The Bulwark. “We are barely 12 weeks into the COVID-19 pandemic and the country is already deeply divided.”

Who, then, when fans are allowed to return to the ballparks at last, will prove to be the pandemic’s Mike Piazza?

Will a pitcher or combination of pitchers rear and throw a no-hitter in the first game back, the way Los Angeles Angels pitchers Taylor Cole and Felix Pena did in their first home game following the unexpected death of fellow pitcher Tyler Skaggs last year?

Try to imagine the future Hall of Fame plaques, for those above making their cases,  including post-pandemic dramatics, reading the way Piazza’s plaque does: “Helped rally a nation . . . with his dramatic home run in the first Mets game in New York following the 9/11 attacks.”

“I got to be honest with you,” Piazza said in that 2016 interview. “I truly feel uncomfortable when people say, ‘You’re a hero.’ I have to disavow myself from that. I don’t feel like I was a hero. I really don’t.”

Whoever will be the same kind of hero when the Show returns from the coronavirus quarantine is liable to feel likewise. And the health care providers and other front-liners in the pandemic who might be at the ballparks, when finally allowed to be, will remember those they could and couldn’t save even as they explode in joy upon the moment if it comes.