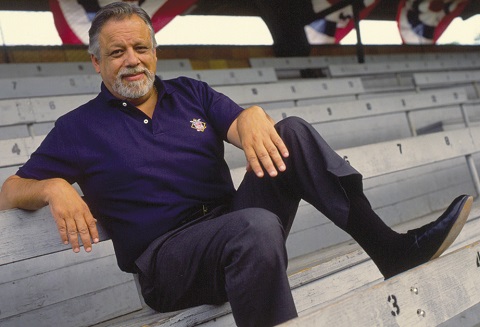 A. Bartlett Giamatti, as president of the National League, 1987-88.

Boys will be boys, but now and again we’re reminded that that doesn’t always excuse them when they mistake crime for high spirits. Come to think of it, baseball got one whale of a reminder in 1987, when the president of the National League found himself unamused about cheating with an appeal placed in front of him.

Phillies pitcher Kevin Gross was caught with sandpaper in his glove, surely not for on-the-spot glove repair, then ejected from the game and suspended ten days. Gross appealed the suspension, but A. Bartlett Giamatti found nothing appealing about it.

And Giamatti handed down a ruling he swore he worked as hard on formulating as he did any scholarly exegesis while he was the president of Yale University. Within that ruling—he upheld Gross’s suspension—the future (and tragically short-lived) commissioner laid down the law.

What Giamatti wrote about one pitcher with a piece of sandpaper can apply to part or even all of a team flouting the rules against deploying high technology, rather than on-the-field gamesmanship, to steal opposition signs.

There were those who thought as the New York Times‘s sports columnist George Vecsey once observed, that Giamatti as president of the National League was “the nutty professor on sabbatical.” What did they think about Gross and his representatives causing his appeal hearing to last five hours and include “exhibits of considerable breadth, two entailing nearly one thousand notations,” as Giamatti recorded at the beginning of his ruling?

Gross and the Players Association claimed the ten-day suspension was “excessive.” Giamatti observed that Rick Honeycutt and Hall of Famer Gaylord Perry had been awarded ten-day drydockings for foreign things in the glove but that Gross and his representatives, conveniently or otherwise, didn’t include those in their mass of exhibits.

In due course, Giamatti told The New Yorker‘s Roger Angell why he approached his Gross appeal ruling with the kind of effort by which he laboured his writings and thinkings at Yale, where his academic specialty was Dante. “It was challenging,” Giamatti told Angell, “to try to be clear about cheating and what it meant, and to be fair at the same time.”

Challenge met with success. You can read the entire ruling in A Great and Glorious Game: Baseball Writings of A. Bartlett Giamatti. Here, though, is the critical point therein. Acts of cheating, Giamatti wrote in denying Gross’s appeal, are . . .

not the result of impulse, borne of frustration or anger or zeal as violence is, but are rather acts of a cool, deliberate, premeditated kind. Unlike acts of impulse or violence, intended at the moment to vent frustration or abuse another, acts of cheating are intended to alter the very conditions of play to favour one person. They are secretive, covert acts that strike at and seek to undermine the basic foundation of any contest declaring the winner—that all participants play under identical rules and conditions. Acts of cheating destroy that necessary foundation and thus strike at the essence of a contest. They destroy faith in the games’ integrity and fairness; if participants and spectators alike cannot assume integrity and fairness and proceed from there, the contest cannot in its essence exist . . . Cheating is contrary to the whole purpose of playing to determine a winner fairly and cannot be simply contained; if the game is to flourish and engage public confidence, cheating must be clearly condemned with an eye to expunging it.

Substitute “one team” for “one person.” Now you get why the Astros caught running a high-tech sign-stealing operation in 2017, against the rules prohibiting such operations, sent baseball, its fans, and its observers into the proverbial tizzy, after a former Astro in position enough to know (pitcher Mike Fiers) blew the whistle on and the covers off the Astro Intelligence Agency.

Reality check: The Astros—or whomever among them created their AIA—aren’t the only such electronic thieves, merely the latest to be caught red Octobered. If you ask whether Astrogate taints their run of three American League West titles and two pennants, you might also ask why a team that great, with as forward-thinking an organisation as theirs, needs technocheating in the first place.

These Astros are sharper than chefs’ knives at the plate and in the field. They exploit the slightest opposition mistakes with minds over matter. Tip your pitches? They sautee you. Slip out of position? They broil you. Hang a breaking ball? They slice, dice, and puree  you. They needed to take up high-tech heisting about as badly as Superman needed a gym membership.

Further reality check: When Giamatti rejected Gross’s appeal, he wasn’t foolish enough to ignore that cheating was (and is) baseball’s oldest sub-profession. Neither was Giamatti naive enough to believe denying one pitcher caught, frisked, arraigned, indicted, and convicted would put cheating in its grave.

Placed in the appropriate position, he could and did demonstrate that at least one baseball official could and did pronounce officially, when the case presented itself, that fair was supposed to be fair. Given the chance to take a stand and make it stick, for however long, Giamatti took the stand with firm eloquence. Saying, essentially, “If not now, then when?”

Unfortunately, even baseball’s most lyrical thinker this side of Sparky Anderson couldn’t make it stick. Neither could a Hall of Famer writing a syndicated newspaper column in 1926 who understood, and enunciated in plain English, the distinction between on-field sign-decoding and off-field high- or even low-tech espionage:

There is another form of sign stealing which is reprehensible and should be so regarded. That is where mechanical devices worked from outside sources, such as the use of field glasses, mirrors and so on, are used . . . Signal-tipping on the fields is not against the rules, while the use of outside devices is against all the laws of baseball and the playing rules. It is obviously unfair.

That was Ty Cobb. Whose reputation as the dirtiest most rules-be-damned player of his era came mostly from one writer whose Cobb-ographies have been debunked completely. If beyond-the-playing-field technological theft was bad enough for Cobb, it should be bad enough for us.

What Cobb called “obviously unfair” is obviously cheating. The Dante scholar who grew up to become president of the National League and baseball’s commissioner should have the last word on cheating, so far as anyone who genuinely loves the game should be concerned. Should but probably won’t. Unlucky us.