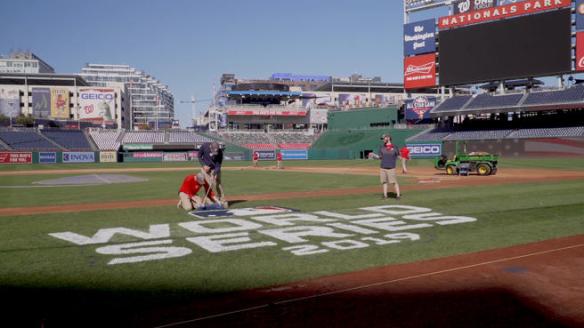 Preparing Nationals Park for the World Series. The Richter scale may not stand a chance against the racket of fans whose city hasn’t seen World Series play in eons.

Believe it. Even if the Astros and Astroworld don’t, quite, yet. These Astros went from 107 regular season wins and the heaviest-favoured World Series team ever to looking as invulnerable as a sand castle. And if Jimi Hendrix was right—And so castles made of  sand/fall into the sea/eventually—then the Astros may be shark bait. May.

The Nationals Park public address system people must be sorely tempted to soundtrack Game Three’s preliminaries, and much of the game itself, with a top ten list including not just “Baby Shark” which became the Nats’ unofficial season theme but “Mack the Knife” (when that shark bites/with his teeth, babe/scarlet billows start to spread) and the theme from Jaws.

Maybe the Astros will look back upon Games One and Two and laugh, one of these days. They’d prefer that laugh to come when they’re hoisting their second World Series trophy in three seasons. But they just might have to wait until the sting of a Nationals World Series conquest wears off.

Because if Justin Verlander is to be believed, and he’s not exactly known as a man who tells it like it isn’t, the Astros are extremely vulnerable no matter what they believe otherwise.

“Lot of baseball left in this series,” said third baseman Alex Bregman, who’d love nothing more than to atone for his feeble Game One bat and his uncharacteristic Game Two fielding mishaps, after Game Two. “We’re going to go to Washington with our heads held high. Ready to go and get after it. We’ve lost two games before. I remember when we lost three in New York and next thing you know we’re in the World Series in ’17. We’ve been here before.”

Except that the Yankees weren’t exactly strangers to them then or last week and weekend. Listen to Verlander and the Astros sound as though they were handed a few very rude surprises.

“I guess I hadn’t really paid that much attention because they’re in the National League, but you start looking at their lineup and kind of prepping for them and I think they’re way better than what people give them credit for,” said the future Hall of Famer. “Obviously those guys in the middle get a lot of headlines, but the rest of that lineup, they can hit. And they work you. They have good approaches, they change their approach. They adjust throughout the middle of the game, at-bat to at-bat. It’s a grind.”

Listen to shortstop Carlos Correa, though, and at first the Astros seem to think it’s just a matter of time before the Nats go under the thunder of the great Houston juggernaut. “We’ve already talked as a team,” he said. “We’ve got to go out there, keep our heads up and play good baseball. Take care of business. We’re such a great team that we’re not going to let a 2-0 deficit get to us.”

Maybe not, but great teams have let 2-0 deficits get to them in the short- or long-run alike.

The 1914 Philadelphia Athletics were a steamroller. But they went from a 2-0 deficit to steamrolled out of that World Series in the Miracle Braves’s sweep. The 1954 Indians destroyed most of the American League (the Yankees won a measly 103) but went from a 2-0 Series-opening deficit to getting destroyed by the Giants. The 1963 Yankees flattened their league and out-won their Series opponent but got flattened in four straight by the Koufax-Drysdale Dodgers. And the 1990 Athletics were supposed to bury that year’s unlikely Reds—until they didn’t, and got buried in four straight.

Which won’t be simple now. Not against these Nats. Not with Patrick Corbin lurking for Game Four in Nationals Park and, if necessary, Max (the Knife) Scherzer for Game Five.

Not with the Nationals bullpen having gone from arsonists to fire department. Not with the Nats having penetrated the reputedly impenetrable Verlander and Gerrit Cole. On the season, as exhumed by ESPN’s David Schoenfield, Verlander fanned 55 percent and Cole 60 percent of batters they took to two strikes. In the Series: the two combined have done it to only 36 percent.

Not with the Nats’ not-so-secret weapon, Game Three starter Anibal Sanchez. The Astros don’t quite have a fourth starter, and their Game Three starter Zack Greinke has been only too vulnerable this postseason. The Nats don’t have to burn some of their bullpen in Game Four when they can send Corbin—who threw one relief inning in Game One and warmed but wasn’t needed in Game Two—against an Astro bullpen game in Game Four on reasonable rest.

And, not with what Astros catcher Martin Maldonado admits, like Verlander, is one of the Nats’ secret weapons: “I would say everything that they’ve hit is a hit.”

Smash hit, so far as Washington’s concerned. And with the Nats playing since late May on the philosophy of going 1-0 day by day, having a ball doing it, and not worrying about tomorrow until tomorrow comes, they went from life support to halfway to the Promised Land.

“Forget the decibel meter,” then-ABC broadcaster Tim McCarver said during a 1988 Series game in the late, unlamented Metrodome in Minneapolis. “Get the Richter scale.” In Nats Park on Friday night the Richter scale may not have a chance.

Baseball fans love to ponder the postseason magic factor and the superstitious natures of a lot of ballplayers. Whatever the mojo is now, the Nats happen to have it working. Just don’t ask relief pitcher Sean Doolittle, as Yahoo! Sports‘s Tim Brown did. “We’re not making live sacrifices or doing anything like that,” Doolittle deadpanned. Not even involving sharks, baby or otherwise.

And even though they’ve made a very public show of wearing their navy alternate jerseys most of the postseason—and are 9-0 doing so—they won’t admit there’s any voodoo, black magic, wizardry, or Grandpa Munster in the dungeon working in the background.

“I’ve been saying for a long time it’s my favorite uniform,” shortstop Trea Turner tells Brown, “but it doesn’t mean we’re going to win or lose in it.” Oho, but you’ve won nine straight in it this postseason and haven’t lost in it yet. Lucy, you got some splainin’ to do. No, she don’t. And the Nats won’t.

Any more than the Astros explained any extraterrestrial mojo they’ve had working from 2017 through now. Like the Nats, the Astros sometimes have a hard enough time explaining that all it takes is a collection of very good baseball players with brains to match their bats and gloves to get to a World Series. They think they don’t have to remind you of Branch Rickey’s Law: Luck is the residue of design.

The Astros might have gone along with the team-of-destiny bit in 2017 but it’s not like it was a spiritual mantra. The Nats have fun with their Baby Sharking and dugout dancing and clubhouse partying, but it’s not as though they’re doing anything deeper with it aside from doing the shark bite gestures with their hands when reaching on extra base hits or—as Juan Soto did after his mammoth Game One homer—crossing the plate.

If you won’t see the Nats performing clubhouse sacrifices, you’re not liable to see the Astros huddled over a cauldron in the clubhouse chanting, “Double, double, toil and trouble/Astros rise and Nats bubble,” either. Even if a 2-0 Series deficit might tempt them to trying to slip a witches’ brew into the Nats’ Gatorade cooler.

But God help them if they run into Animal Sanchez Friday night—the junkyard dog who throws slop at any speed and gets away with it, not the old man who actually pondered retirement until he didn’t and the Nats adopted him from the Braves’ shelter.

And, if Greinke doesn’t go deep in Game Three or keep the Nats’ frisky bats out of whack with a good enough brew of off-speed ingredients. And, if key bats like Bregman, Correa, George Springer, and Yuli Gurriel don’t return and stay at the chef’s table. And, if Jose Urquidy—liable to start their bullpen Game Four and showing promise enough so far—falters early enough.

It’ll take a lot more than a baboon’s blood and shark repellent to cool the Nats off, then.