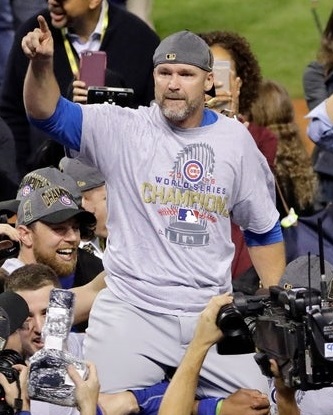 David Ross gets a World Series-winning lift from the Cubs in 2016. Now he gets to manage them.

If you take the word of Chicago Tribune columnist Paul Sullivan, the only successor to Joe Maddon who was ever on Cubs president Theo Epstein’s radar was David Ross. And if you read Epstein’s foreword to Ross’s 2017 memoir, Teammate, in which Epstein described Ross in terms that sounded like a job description for a manager, you probably figured the same thing:

The watchful eye from the dugout to make sure we respected the game and played the Cub Way. Unselfish, team-first, winning baseball. The glare when someone did something that wasn’t Cub. The rare harsh word when it happened again. The high-fives and pats on the rear when it got fixed. The instinct when to know when to create levity and when to get guys locked in. Reminding the young players how good they are. Reminding them they can get better. Words to keep the team grounded when winning seemed easy. Words to lift up the team when losing just one more would end the season.

Sounds a lot like the way Grandpa Rossy was during the Cubs’ run to the 2016 World Series conquest. (Which so wasn’t Cub, right?) Especially when he had to handle his buddy Anthony Rizzo’s Game Seven jitters.

Especially when Ross himself needed a big lift after a horror of a Game Seven throwing error one inning, providing it himself the next when this spaghetti bat whose baseball knowledge was ten times as valuable hit a gassed Andrew Miller’s 2-2 service into the left center field bleachers, for his final major league hit en route the Cubs’ stupefying win.

Found reposing alone with his wife and children in the Progressive Field visitors clubhouse, Ross was asked whether he’d now rethink his intended retirement. “Oh, God, no,” he replied. “How can I top this? If I come back, it’ll be to get my [World Series] ring and maybe yell at [Anthony] Rizzo from the seats.”

Ross picked up his World Series ring the following Opening Day in Wrigley Field. Now, despite the Cubs having to go through the hiring process even as a matter of formality under the rules, Ross will get to yell at Rizzo and any other Cub who might need it now and then from the dugout again. This time, as their skipper.

“[I]f you’re looking for a leader to take the Cubs back to the level they believed they’d be at for years after that ’16 title,” Sullivan writes, “those are exactly the qualities you’re seeking—a motivating, demanding, reassuring and fun-loving guy.”

It could be fun loving for Cub Country, too, especially considering the biggest weakness among several that they had in 2019. This year’s Cubs didn’t intimidate pitchers quite as much as they found pitchers absolutely unconcerned about giving up hits because those pitchers got to see them run into outs as if there were free tickets to the nearest clown show at the end of each out.

He might have earned the nickname Grandpa Rossy for his sanguine style as a team leader, but it doesn’t mean Ross is going to be that indulgent a grandpa now that he has the bridge. He won’t stop the Cubs from having fun again, he’ll probably encourage it, but that doesn’t necessarily mean he’ll forget to break out the bull whip when need be.

Unfortunately, it doesn’t necessarily mean there’ll be a lack of laughter over Ross’s hiring. He’s never managed. And the continuing trend of skippers without the backup experience still draws mixed reviews. For every Aaron Boone there’s a Gabe Kapler.

Stop snarling, Yankee fans. It wasn’t even close to Boone’s fault the Yankees got shoved to one side and away from this World Series, and—contrary to popular belief (namely, yours)—Boone did better in his first two Yankee regular seasons (203 wins) than any manager in Yankee history except Ralph Houk (205 wins). Even Joe McCarthy (201), Casey Stengel (195), Joe Torre (188), and Joe Girardi (192).

So Boone was silly enough to let a faltering Aroldis Chapman finish what he started and refuse to put Jose Altuve aboard with a man on and two out to pitch to a glove-first/ spaghetti-bat on deck? There have been equal or worse mistakes in Yankee history, postseason and otherwise, and by skippers with more time in service than Boone.

In his twelfth Yankee season Stengel forgot to align his World Series rotation to give Hall of Famer Whitey Ford three starts—and cost himself the 1960 World Series. Houk in his third had no answer other than expecting the Dodgers to drop dead at the sight of Yankee uniforms—and got swept in the 1963 Series.

Girardi in his final year failed to demand a review of a hit batsman who actually got hit on the bat knob . . . and watched the next Indian hit a grand slam in a division series to push the Yankees to the brink of a sweep they avoided and beat only to lose that pennant when the Astros out-scored them 11-1 in Games Six and Seven.

Ross should have few problems if the front office gives him even a marginally better bullpen than 2019’s, his hitters actually meet balls with their bats, his defenders tighten up, and his baserunners quit auditioning for the next Three Stooges revival. Not to mention the Cubs overcoming a few years of dubious drafts since Epstein yanked the front office inside out.

And remember: Ex-catchers do rather well as major league managers in any era or game culture. It only began with Connie Mack and two Philadelphia Athletics dynasties.

Al Lopez won pennants managing the Indians and the White Sox. Long the third-string backup to Hall of Famer Yogi Berra and his backup Charlie Silvera, Houk won three pennants and two World Series in his first three seasons on the Yankee bridge. The Yogi himself won a pair of pennants managing the Yankees and the Mets. Gil Hodges converted from catching to first base—and managed the 1969 Miracle Mets.

And that’s a former catcher who managed the first Astros World Series winner two years ago and is trying to win their second in a) franchise history and b) three years right now.

Grandpa Rossy has reasonable odds of joining either one or the other group. The bad news is that a lot depends on how reasonable or unreasonable the Cubs are from here. The good news is that you won’t see Ross tearing his hair out over Cub mistakes. He hasn’t got any left to tear out. Almost. A bark under the park should suffice.

He even gets his own unique entry in the land of trivia contests: Name the only manager ever hired for the job two years after he finishes as a runner-up on Dancing with the Stars. Look out, you Dancing Nats, here come the Cha-Cha-Cubs!