For an organisation as intelligent as the Astros’ organisation, even they trip on banana peels now and then. But what do you think when one of their own drops the banana peel on which they trip?

Assistant general manager Brandon Taubman dropped this peel, apparently, toward the end of the Astros’ pennant-winning celebration Saturday night. And it exploded into a small firestorm when Sports Illustrated reporter Stephanie Apstein revealed it Monday night.

With three female reporters in earshot, at least one of whom wore a bracelet promoting awareness of domestic violence, Taubman hollered, “Thank God we got [Roberto] Osuna! I’m so [fornicating] glad we got Osuna!” He may or may not have aimed his outburst at those three reporters directly. But this is more than just a terrible look. “Grotesque” may only begin to describe it.

The Astros got Osuna when the Blue Jays couldn’t wait to be rid of him while he was under suspension for domestic violence in mid-2018. The case was withdrawn after the trade to the Astros, when the woman—with whom Osuna has a now four-year-old child—refused to return from Mexico to testify against him and Osuna signed a legal document agreeing not to have contact with her for a year to follow.

“The three female reporters were approximately eight feet away and one was visibly shaken by the comment, the eyewitnesses said,” writes Houston Chronicle reporter Chandler Rome. “There were no players in the area and no interviews were being conducted at the time.” And one Astro staff member reportedly apologised for Taubman’s quick rant.

Taubman’s outburst might seem somewhat bizarre even if Osuna didn’t have a domestic violence case in his recent past. With the Astros leading and hoping to avoid a seventh American League Championship Series game, and thus avoid burning Gerrit Cole in favour of him starting the World Series, Osuna surrendered Yankee first baseman D.J. LeMahieu’s game-tying two-run homer in the top of the ninth.

It took Yankee manager Aaron Boone electing to let his faltering closer Aroldis Chapman try to finish what he started—pitching to Astros second baseman Jose Altuve on 2-1, with outfielder George Springer aboard and a late insertion good-field/spaghetti bat on deck—to get Osuna off that hook. Altuve hit the shot heard ’round Astroworld and sent the Astros to the World Series.

“If [Taubman] wanted to offer support for Osuna, he would tell Osuna,” writes ESPN’s Jeff Passan, “not yell it in front of reporters and cameras.” He’d have taken Osuna to one side, put an arm around him, and reminded him, listen, we wouldn’t have gotten here without you in the first place, and, hey, we won the pennant, my friend, now let it out and shake it away, because we still need you in the World Series.

This was more than an empathetic executive trying to comfort a subordinate whose best-laid plans exploded in his face. And in the middle of the purely baseball mayhem it was too easy to forget one domestic abuser in an Astro uniform got thatclose to blowing the game for the Astros in the top of the ninth while another domestic abuser in a Yankee uniform threw the pennant-losing pitch in the bottom.

Taubman barking his support for Osuna in earshot of others and in the words that he chose was a horror. Not for standing by his man after he’d been humiliated on the mound, but for the implication that in acquiring him in the first place the Astros put a game ahead of a moral and ethical issue.

The Astros responded to Apstein’s story by denouncing it in a statement as a “misleading and completely irresponsible . . . attempt to fabricate a story where one does not exist.” (That would be “fake news” in today’s lingo.) When Apstein tweeted the story and the Astros offered that response, another Chronicle reporter, Hunter Atkins, tweeted in response that it wasn’t misleading at all: “I was there. Saw it. And I should’ve said something sooner.” He wasn’t alone in what he saw.

Neither are the Astros alone in putting the game ahead of moral and ethical issues.

That was the same implication attached to the Cubs when they dealt for Chapman for the Yankees in 2016 and the Yankees for first acquiring, then trading (for middle infielder Gleyber Torres), then re-signing him as a free agent. The Yankees traded Chapman to the Cubs as the Bombers slipped out of contention; they got him in the first place after the Dodgers backed out of a deal with Chapman’s original team, the Reds, upon Chapman’s domestic violence suspension the previous winter.

Chapman’s presence and contribution to the Cubs’ staggering 2016 World Series win put the Cubs on the proverbial horns of a dilemna. Even Cub fans had a difficult time reconciling the 108-years-in-waiting return to the Promised Land to the fact that a pitcher accused of domestic violence helped get them over the mountaintop at last.

The Cubs’ dilemna was resolved only partially when Chapman returned to the Yankees. Forgotten were the small details of Chapman’s case: police didn’t press formal charges against him because of “contrasting stories” as well as concerned of evidence. Also forgotten, alas, was Chapman initially apologising only for having a gun, not necessarily for the incident itself.

Dealing for and eventually re-signing Chapman left the Yankees with a bad look, too. It left them looking as though morality and ethics could just step aside when there were baseball games and pennant races to plan. But unless some New York beat writer is sitting on it even now, nobody in the Yankee organisation to anyone’s knowledge ever hollered, “Thank God we got Chapman! I’m so [fornicating] glad we got Chapman!” and got away with it, either, with or without reporters female or otherwise in earshot.

Yankee owner Hal Steinbrenner spoke about forgiveness and second chances. So did the Cubs, though with a lot less sanguinity, after shortstop Addison Russell’s case exploded last offseason, when—as Russell’s suspension for domestic violence was to carry into this season’s beginning—his former wife gave an interview in which she ran down the details of love turned to infidelity, suspicion, and finally violence.

Chapman’s case dropped for lack of evidence and clashing stories was nothing compared to Russell’s ex-wife delivering the gory details. But standing by Russell even with qualifiers didn’t do the Cubs any favours this season. After returning from his suspension, Russell had an injury-marred season and may not even be a Cub for 2020 after September callup Nico Hoerner made a big impression.

That won’t be the same as it would have been if the Cubs had rid themselves of Russell when the details about his abuse came to light. The Blue Jays knew enough about Osuna to want him out of their sight, the sooner the better; the question of how soon and how much the Cubs really knew about Russell remained open. And Steinbrenner told reporters about Chapman, “He admitted he messed up. He paid the penalty. Sooner or later, we forget, right?”

That’s sort of what the Mets said, too, when relief pitcher Jeurys Familia returned after his brief 2017 suspension for domestic violence. They traded him to the Athletics in July 2018, then re-signed him as a free agent last winter.

Astros general manager Jeff Luhnow said the Osuna deal might actually help raise awareness of domestic violence in due course. And, in fairness, as Apstein herself observed, the Astros have since “made some gestures to demonstrate how seriously they took domestic violence, referencing in a statement their “zero tolerance policy,” donating $214,000 to various shelters and hanging fliers with hotline numbers in every women’s restroom at Minute Maid Park.

Few spoke up about one flip side of those coins—that there’s no such thing as an inherent right to play professional sports.

Maybe the Astros, the Yankees, and the Cubs should have asked former Baltimore Ravens running back Ray Rice about that. He lost his career after he was caught on video attacking his fiancee. In due course Rice’s fiancee became his wife. And the couple together sat for interviews in which Rice candidly admitted he had the end of his football career coming.

When the Astros first acquired Osuna, it put several Astros on the spot, particularly pitcher Justin Verlander. The future Hall of Famer has been outspoken against domestic violence. Two months before Osuna’s acquisition, Verlander tweeted angrily when an Astros minor leaguer named Danry Vasquez was caught on video hitting his girlfriend several times.

“I hope the rest of your life without baseball is horrible. You deserve all that is coming your way!” Verlander thundered. The Astros released Vasquez and he joined the independent Lancaster Barnstormers. The Barnstormers released him when they saw the video. He now plays in the Mexican League for the Rieleros de Aguascalientes.

But when Osuna joined the Astros, Verlander said on the record, “It’s a tough situation. I think the thing for us to remember here is that the details have not come to light. We don’t know the whole story. Obviously, I’ve said some pretty inflammatory things about stuff like this in the past. I stand by those words.”

So far, Verlander’s been right about the actual details never coming to light. But baseball government knew enough to slap Osuna with what was the third-longest domestic violence suspension since its policy was born three years earlier.

Taubman gave the Astros a grotesque look with his late Saturday outburst, which those who were there seem to believe came entirely out of nowhere and without being asked. With the World Series about to begin the timing is worse, but the Astros can and need to do more than just wipe the egg off their faces.

They were foolish enough to lock themselves into a cage over their hair-trigger defense of Taubman and their likewise hair-trigger accusation that Apstein’s story was nothing more than a hit job. There’s also no inherent right to work in a major league baseball organisation off the field, either, whether you’re an assistant general manager or a peanut hawker in the stands.

When then-Cardinals scouting director Chris Correa was caught red-handed hacking into the Astros’ scouting computer database, commissioner Rob Manfred slapped the Cardinals with the maximum allowable $2 million fine and banned Correa from baseball for life, while Correa was sentenced to more than three years in prison.

Acquiring Osuna in the first place discomfited more than just Astro players. Assorted published reports say that not everyone in the Astros’ organisation was thrilled, either. You wouldn’t be wrong if you think those same less-than-thrilled Astro people wish Taubman would go away and fast. I’m betting a boatload of Astro fans feel likewise.

Because those same Astro people now must ask whether the organisation and baseball itself really wants to say computer espionage deserves a lifetime banishment but a man so publicly ignorant about domestic violence, by comparison, is no great shakes. 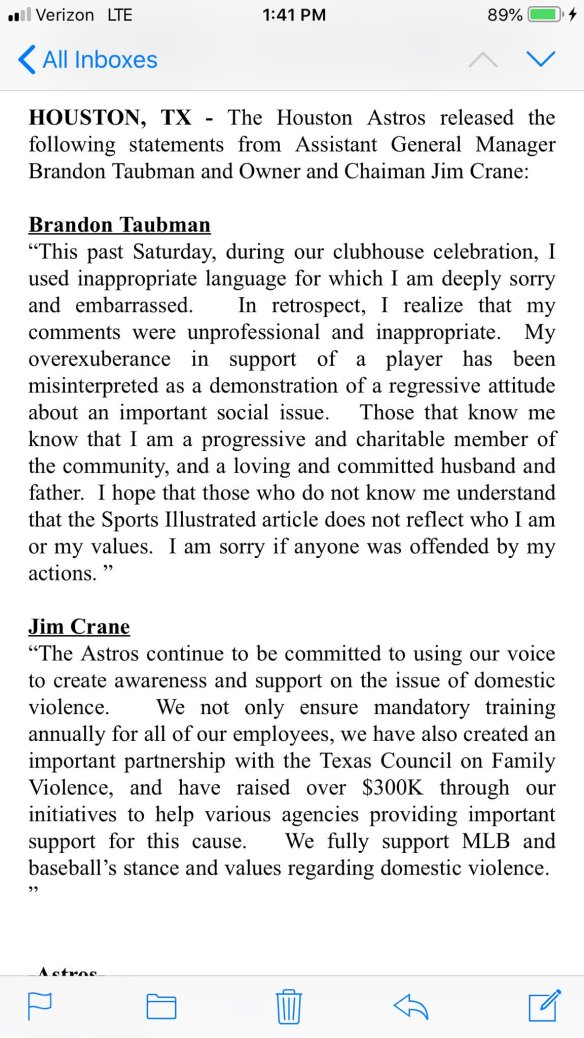 Note the phrasing: “if anyone was offended.” There’s no “if” about it. At least three in direct earshot and who knows how many more reading all about it were offended. And, there’s no appropriate language in which to thank your Maker for a man known for domestic violence.