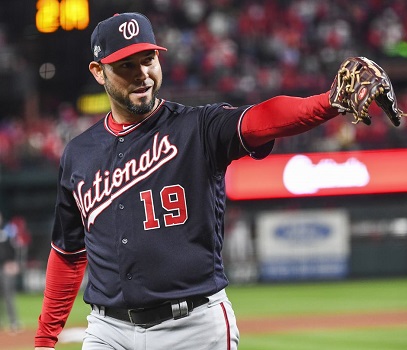 Anibal Sanchez, appreciating the man who busted his Game One no-hit bid and the plate ump who called the game, as he leaves in the bottom of the eighth . . .

It looks as though the Cardinals have something else to worry about beside the Nationals’ three aces. There was a joker in the Nats’ deck Friday night.

And what he did in Game One of the National League Championship Series would have been a laugh and a half if he hadn’t had to face a pinch hitter who slapped a clean single off him in the bottom of the eight.

If you could swear you saw marshmallows going up to the plate until Jose Martinez delivered his hit, your eyes weren’t playing tricks. Sanchez’s fastest pitch barely crosses 90 miles an hour. His split finger fastball is more split than fast. His changeup is called a butterfly, but real butterflies come in like a squadron of fighter jets by comparison. His cutter wouldn’t cut a sheet of paper.

But they move. He moves them all around the strike zone. He and the Nats watched one after another Cardinal batter check in at the plate determined to hit that slop into the Mississippi River and wondering why their biggest swings were barely good for summer day camp softball hitting among ten year olds.

“I just tried to keep focused on every pitch that I’m going to throw,” Sanchez told reporters after the Nats finished what he started, a 2-0 Game One shutout in Busch Stadium. “I don’t want to miss any kind of pitch in the middle in the zone against those guys.”

He succeeded in ways even he probably didn’t fathom. He threw 103 pitches and—count ’em!—only two of them hit dead center of the strike zone while only two more hit immediately around it.

One of the two hitting dead center damn near meant disaster in the bottom of the eighth, when Tommy Edman, playing right field in Game One for the Cardinals, sent a cannon shot toward the right side. Nats first baseman Ryan Zimmerman picked the perfect moment to channel his inner Superman, diving like the Man of Steel on takeoff to snap his mitt around it before it landed for a base hit to short right.

Sanchez thought right then and there that he’d have a shot at finishing the no-hitter. A fly out later Martinez thought otherwise, pinch hitting for Cardinals reliever Ryan Helsley, sending a full-count splitter into center for a clean base hit. The only Cardinal hit of the night.

“He was just hitting his spots and keeping us off balance all night,” said Edman, “and we just didn’t execute our plan very well.”

Time was when Sanchez threw harder, particularly what Gomes called “the power slider.” On Friday night he made a statement on behalf of junkballers the world over. You don’t need power to survive on the major league mound no matter what you throw. Especially when the other guys are about as good with off speed pitching as a hay fever sufferer is with pollen.

“When you kinda lose the power slider,” Gomes said of Sanchez, “there’s power in there (his heart) and power up there (his mind).” Pointing to his chest and his head. “He went out there, controlled the zone, controlled everything they were doing,” Gomes continued. “It’s almost like you get kind of a chuckle off them. When a guy like that can manipulate his speeds it’s pretty amazing.”

Manipulate his speeds? Sanchez’s swiftest pitch wouldn’t have equaled speed four on a Mixmaster. He folded ingredients, blended them gently, maybe mashed a few potatoes, but he wasn’t anywhere near enough power to roll out the attachments.

Almost the moment Martinez pulled up at first in the eighth, Nats manager Dave Martinez went to the mound to lift Sanchez for Sean Doolittle. The Busch crowd bathed Sanchez in a standing ovation that seemed six parts appreciation and half a dozen parts thank-God-he’s-finally-out-of-there.

Sanchez waved his glove in gestures of appreciation to the Cardinal who’d busted the no-no and to plate umpire Phil Cuzzi, who called the pitches. Hopefully, he had a similar gesture or word for Cardinals’ starter Miles Mikolas, whose own six splendid innings went for nothing partly because Sanchez was bound to hog the headlines.

“I had a rough regular season,” said Mikolas, the owner of a 4.16 regular season ERA. “I’m doing my best to make up for it in the postseason.”

Mikolas and six Cardinals relievers did their best to keep the Nats off their own game plan at the plate. Sure, they scored their first run thanks to a leadoff double by second baseman Howie Kendrick and a two-out double by catcher Yan Gomes in the second, and their second run thanks to a one-out triple by right fielder Adam Eaton and Kendrick’s two-out single in the seventh.

But they went 2-for-12 with men on second or beyond, stranded first and second in the sixth and the ninth, and the bases loaded in the fifth and the seventh. They could have gone for the Cardinals’ throats and settled for a couple of raps on the mouth. Lucky for them Sanchez’s lone walk and two accidental hit batsmen came to naught for the Cardinals, too.

The walk, to Wong with one out in the fourth, got dangerous after Goldschmidt flied out, when Wong stole second and took third on Gomes’s throwing error, but Sanchez got Ozuna to foul out to third baseman Anthony Rendon.

Pinch hitter Randy Arozarena—he who sent Cardinal manager Mike Shildt’s foul postgame rant viral for a spell after they won their division series—got plunked with one out in the sixth and stole second himself, then got pushed to third while Fowler grounded out to second, but Wong lined out softly to center to end that one.

And Yadier Molina with two out in the seventh got kissed between his shoulder blades with one of Sanchez’s butterflies but Matt Carpenter grounded out to first unassisted for his trouble.

Doolittle was on call for the end because Daniel Hudson was on quick paternity leave with his wife giving birth to their daughter. Not one Nat begrudged Hudson. “I think the mood of the guys in the bullpen,” Doolittle said afterward, “[was] we really wanted to find a way to pick him up and allow him to enjoy a really special moment with his wife and his family.”

“Apparently,” their skipper said, “the baby didn’t want to come out until later on this morning.”

Doolittle did his part, getting the asked-for four-out save almost effortlessly, luring Dexter Fowler into an eighth inning-ending grounder to third before throwing Kolten Wong out on a leadoff bunt attempt, luring Paul Goldschmidt into grounding out to Zimmerman at first unassisted, then striking Marcell Ozuna out swinging to end the game.

Thus did the Cardinals lose an NLCS opening game without having to deal with the Nats’ vaunted Big Three starting pitchers. Amend that. Sanchez just gave them a Big Enough Four. Almost surprisingly, considering he had a 3.48 road ERA this year and the Redbirds took two of three from the Nats in a regular season Busch set.

They also didn’t have to deal with the Nats’ fully-A lineup. Center fielder Victor Robles was still missing in action nursing a hamstring strain and catcher Kurt Suzuki was still under concussion protocol after taking one off his wrist into his face from Dodger pitcher Walker Buehler in Game Five of their division series.

And they couldn’t push Sanchez out of the game early enough to force the Nats into a Wander Suero option out of the bullpen, Suero occupying Hudson’s spot for the time being, knowing full well that Hudson, Doolittle, and maybe Fernando Rodney are the only three Nats bulls these days who don’t sink Washington’s antacid market.

But this was essentially the same Cardinals lineup that bastinadoed the Braves for ten first-inning runs two days earlier. The problem: they’re vulnerable to off speed stuff thrown by pitchers who know how to keep the stuff away from the middle of the plate. The only pitch Sanchez threw dead center busted up his no-hitter.

Even Max the Knife, Stras, and Prince Patrick should be making notes: don’t live on your fastballs with these Cardinals. And this is not the time to take the middle ground while you’re at it. Sanchez didn’t believe in the middle ground Friday night, and neither, really, did Doolittle, which is why Gomes had one more hit than the entire Cardinal lineup.

“Why any pitcher who can throw decent off speed stuff ever gives this team a fastball within the general vicinity of the strike zone is a mystery,” agrees St. Louis Post-Dispatch writer Ben Frederickson. “The Cardinals’ inability to adapt on the fly resulted in their eleventh and most costly shutout of the season.”

“He doesn’t get overlooked but it’s such a different kind of pitching,” Zimmerman continued. “But tonight was obviously vintage Anibal. I’ve seen him do that for almost fifteen years but tonight was special.”

It may be just as special if not more so when Scherzer goes mano-a-mano with Adam Wainwright in Game Two Saturday. Even if Wainwright isn’t the pitcher he used to be thanks to too many injuries. Far as Wainwright’s concerned, getting to face Scherzer is an early Christmas present.

“We have similar games,” the Cardinals’ righthander said. “We’re both attacking with high-velocity fastballs at the top of the zone and nasty sliders and changeups.” Then, he paused thoughtfully. “I would have loved to have reinvented myself into Max Scherzer, that would have been amazing. It just didn’t work that way.”

It never does. There’s only one Max the Knife. And the Nats need him to slice, dice, and carve as deftly on Saturday as he did to the Dodgers in the division series.