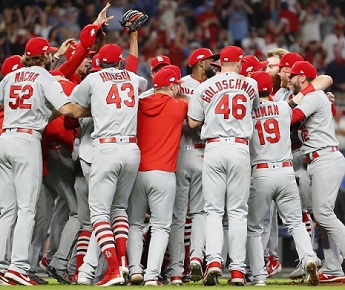 The Cardinals earned their coming NLCS berth . . . and their skipper earned them an image as unsportsmanlike winners with a postgame rant.

Until he was out-boxed and out-thought by Muhammad Ali in 1964, Sonny Liston was so brutal in the ring he inspired gags about knocking his opponents out before the weighing-in was finished. Forgive the Braves if they think they were stink bombed, pistol whipped, and machine-gunned before “Play ball!” finished escaping the umpire’s mouth.

In avian terms cardinals are seed-eaters by nature, not birds of prey. Don’t tell that to the Braves at any time from now until spring training. Because baseball’s Cardinals turned into glandular enough birds of prey in the top of the first Wednesday afternoon. Leaving no carrion behind.

The 13-1 final score almost didn’t matter. What the Braves incurred from the Cardinals not even Alfred Hitchcock could have conjured. Losing a tenth consecutive postseason set was bad enough. How the Braves were destroyed in Game Five of this National League division series was precedent setting.

No team in the history of division series play ever scored ten runs in a single inning until the Cardinals did it to open Game Five. They did it without one batter in Cardinals feathers hitting one into the seats. It went from small ball to medium ball. Not that the Braves cared, particularly. It hurt just as deep as if they’d been nuked.

Especially after they were four measly outs from going to the National League Championship Series themselves on Monday night. Before Yadier Molina singled home the tying run in the eighth and hit the game-ending sacrifice fly in the tenth in Game Four. Before the trip back to Atlanta. Before the early burial.

Before Cardinals center fielder Dexter Fowler, once a World Series-winning Cub whose St. Louis tenure hasn’t always been a joyful noise, got thatclose to striking out before wringing a game-opening seven-pitch walk out of Braves starter Mike Foltynewicz. Before the Cardinals sent ten runs across the plate without one single soul hitting one into the seats.

And before Cardinals manager Mike Shildt—who looks so prototypically like a nerd you’d think he knew no expletive stronger than deleted at first glance—delivered a postgame rant of the kind that usually comes when a team’s been battered, not the other way around.

Tommy Lasorda and Lee Elia, you’ve been upstaged. Meet Shildt, in one fateful moment he’d surely love to walk back now. Meet Shildt, the sorest winner on the planet.

Rookie Cardinals outfielder Randy Arozarena, a ninth-inning pinch hitter who finished Game Five playing right field, filmed Shildt’s rant and posted it to Instagram. That’ll teach him. He couldn’t delete the post or apologise fast enough once it hit the Internet flying. Too late. Way to soil your own achievement, boys.

Fowler may or may not have been lucky to survive long enough to wring that game-opening walk; on 1-2 he foul ticked a pitch by less than a hair. “Did I?” he cracked after the game. “That was so long ago I can’t even remember.”

Foltynewicz hadn’t walked a single soul in his Game Two start. Little did he know. And little did anyone in the joint know Cardinals second baseman Kolten Wong would even think about sacrificing Fowler to second, never mind doing it almost immediately. “After a good at-bat by Dex,” he’d say, “I told myself, ‘Just get him scoring position’.”

The Cardinals had one goal going in: take the Braves’ home audience out of the game as soon as possible. During the National Anthem if need be. They got close enough. After that, knowing they were sending Jack Flaherty to the mound, they figured a single run might be enough for the kid who pitched the National League’s ears off in the season’s second half.

“We know what kind of a pitcher Foltynewicz is and what he did to us last time and the way this series has been,” said first baseman Paul Goldschmidt, who beat out an infield hit right after Wong’s sacrifice. “We wanted to get on the board early.”

He forgot to mention the “often” part. And after left fielder Marcell Ozuna lofted a pitch that arrived around his toes into right to send Fowler home, Braves first baseman Freddie Freeman—as close to Old Reliable as the Braves have had since the retirement of Hall of Famer Chipper Jones—mishandled Yadier Molina’s hard grounder to load the bases.

Having the arguable worst week of his career as it was, en route a .200 NLDS batting average on four hits (including one homer and one double), six strikeouts, and one walk in 21 plate appearances, Freeman didn’t flinch after the massacre. “They got nine more runs,” he said. “That was pretty much the game right there.”

Matt Carpenter, penciled in to start at third base for the Cardinals, walked in a run. Tommy Edman, who’d taken Carpenter’s job during the season but was penciled in to start in the Game Five outfield, tore a two-run double down the right field line and chased Foltynewicz in favour of Max Fried. The Braves ordered a free pass to Cardinals shortstop Paul DeJong.

And Flaherty had the strange distinction of becoming the rarest breed of pitcher: one who gets to hit before he’s even thrown a single pitch. Not to mention facing his high school buddy and teammate Fried. And he walked Carpenter home.

“I’m laughing because Max is up there,” the righthanded boy wonder remembered after the game about approaching the plate. “I’m trying to keep a straight face. I looked up into the stands and saw my mom, which was great. She was smiling and all excited. I didn’t expect Max.” That’s nothing compared to what Fried didn’t expect.

He didn’t expect Fowler and Wong to hit back-to-back RBI doubles. He didn’t expect to throw a wild pitch to Ozuna for strike three enabling Wong to come home after Goldschmidt left Wong room enough to take third on a line out to right. You almost swore Molina grounded out to end the flood at last because he took pity on the Braves for one brief, shining moment.

Adam Wainwright, who pitched heroically enough in Game Three only to see it laid to waste late, could barely believe what he saw from his seat in the Cardinal dugout. “Have you seen anything like that?” he asked before answering after the game. “We just kept the pedal to the metal . . . I was just trying to stay in the moment, but after that inning I came in to the guys and said, ‘I’ve never seen anything like that’.”

The rest of the game seemed almost ceremonial even if Flaherty didn’t exactly have an untroubled outing. He shook of first and second and one out in the first, shrugged off Josh Donaldson’s solo home run in the fourth, and survived a bases-loaded jam in the fifth when he lost control momentarily and hit Ronald Acuna, Jr. with a pitch.

Considering the testiness between Acuna and the Cardinals most of the series the easiest thought to indulge was Flaherty trying to send the Braves’ youthful center field star a message. Considering everything else by that time, there was no way Flaherty would send a message pitch with what was then a twelve-run cushion that should have felt more like a hot tub, especially since Flaherty faced Acuna in the first and walked him without so much as a thought of inside and tight.

Pitching coach Mike Maddux went out to the mound at once to settle Flaherty. He didn’t want his lad making the same mistake Foltynewicz made in that first-inning flood, crossing the line between pitching with emotion and emotionally pitching. Flaherty got the message and got rid of Freeman on a ground out to second for the side.

After the flood, the Cardinals flipped from opening with offense on the brain to pure defense. They moved Edman to third and Fowler to right and sent Harrison Bader out to center field immediately after they’d finished the ten-run opening act. As if to remind his team he knew good and bloody well he had more than a glove working for him, Edman tore one off the top of the right field wall for a one-out triple in the top of the second.

Paul DeJong didn’t give Fried a moment to breathe before he ripped the next pitch off the wall for an RBI double. And after Flaherty zipped through the Braves in order in the bottom, Luke Jackson relieved Fried. He walked Wong on a full count, struck out Goldschmidt, plunked Ozuna on the first pitch, and got a sharp grounder out of Molina.

A grounder Braves shortstop Dansby Swanson picked and shoveled to second baseman Ozzie Albies, and the ball hit Albies’s bare hand leaving all hands safe. Then Bader lined one up the middle to score Wong and, after Edman struck out, DeJong hit another first pitch right through the left side to score Ozuna.

Thirteen runs in three innings. The rest of the game felt like a plain formality. The Braves bullpen from Josh Tomlin forward kept the Cardinals so quiet the rest of the way you began to feel tempted toward asking Braves manager Brian Snitker whether he’d think about trying a purely bullpen game if he could get a Game Five do-over.

“I don’t know that I’ve seen that many guys hit in the first inning that quick in my entire life,” Snitker said. “I don’t know. It wasn’t how we drew it up, I know that. I don’t know. That thing just kept rolling and we couldn’t stop it.”

“Everyone had sky high confidence going into that game and them scoring ten runs, it’s hard to swallow,” said Freeman after the game. “Everything went wrong from the get-go.”

“You don’t expect something like that to happen,” Donaldson lamented, “especially with how well we played all season.”

Any more than you expected Shildt’s post-mortem potty-mouth.

Tony La Russa’s Cardinals beat the Dodgers in a 2004 division series and, after it ended, led his players across the field for a handshake-and-hug line with the Dodgers after the 3-1 triumph. (Effervescent Jose Lima’s Game Three shutout was the only Dodgers win.) It was a grand and entirely endearing gesture. And baseball’s then-chief of discipline Bob Watson reprimanded the Cardinals for it.

La Russa may have had his flaws, but ranting like a drunken sailor over the freshly vanquished wasn’t one of them. Where’s Joe Torre, fellow Hall of Fame manager who now has Watson’s job among his other duties out of the commissioner’s office, to reprimand Shildt?

Letting the kids play is one thing. Letting them enjoy the living daylights out of the moment when they do big things without being broiled by baseball’s Fun Police for it is another thing. But letting a manager get away with a Shildt-like rant after a win at all, never mind one as lopsided as the Cardinals’ on Wednesday? That’s [fornicating] something else entirely.

This wasn’t Yankee manager Aaron Boone going on his now-famous “savages” rant in support of his players after a couple of nasty arguments with a couple of questionable umpires. This was a manager whose team had just humiliated a worthy opponent but who couldn’t resist grinding his heel on their fallen necks.

Arozarena owned up to making a rookie mistake posting his manager’s postgame potty mouth. Shildt made his team look so juvenile that most other fan bases in baseball will forget how surreal their first inning achievement was and hope the Cardinals go down hard in the National League Championship Series.

And if they do, they’ll probably find Braves fans leading the anti-charge. With no jury in the land prepared to rule them unjustified. It’s the least they can be allowed now.