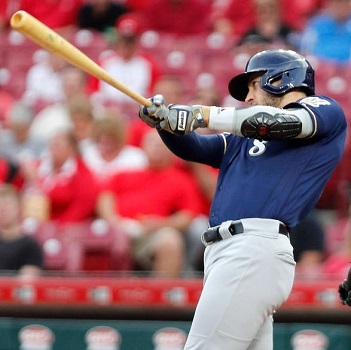 This season’s been strange enough without picking out the unlikeliest feel-good stories of the year. You thought a season-long battle with the injured list making the Yankees actually seem lovable was strange enough? You thought slugging their way to the American League Central title makes the almost-unexpected Twins’ case?

Well, then, what do you think about the real feel-good story of the year? It’s out of Milwaukee, you know. It’s called Lose MVP, Make Postseason Anyway. And as of this morning it could start changing to Lose MVP, Take Division.

The Brewers are doing what lots of fans only wish their teams might have done. Everyone wants to see their teams rise from the dead. The Brewers are bloody well doing it. Just like they did last September. Except that this time around they looked a little worse for wear before the month began. And they won’t have Christian Yelich in service again until spring training.

Be real. A runaway success is well and good. For all intent and purpose, that was this year’s Astros, Braves, Dodgers, and even the Yankees. Jaw dropping as the Yankees’ endurance was despite their season being St. Elsewhere, Yankee Stadium, their organisational depth helped make sure the farthest behind the Yankees ever fell was five and a half games—on 18 April.

The Astros were probably baseball’s second-most injury-challenged team, maybe with the now also-ran Phillies right up there with them. But the Astros are made of a lot stronger stuff and are at least as deep as the Yankees. They’re liable to end up with baseball’s best regular season record, if the Yankees don’t. They were last seen near five games behind even earlier than the Yankees—on 3 April.

And with Mike Trout out of the picture since going down for the season over nerve surgery in his right foot, Alex Bregman—who’s been Trout’s only anywhere-near-viable competition for the prize this year—is liable to end up as the American League’s Most Valuable Player, with Justin Verlander the likely AL Cy Young Award winner. These Astros aren’t exactly sad sacks. They could even win this year’s World Series. Could.

So turn to the Brewers. Whose best player and team carrier got knocked out of the box literally on 10 September when he smashed his kneecap on his own foul off the plate. A knockout that had an awful lot of people, yours truly included, thinking the Brewers might have been knocked out right then and there. Even as they hung in anyway that day to beat the Marlins by a run.

They finished that day five games out in the NL Central and a game behind the Cubs for the same. They finished the same day a game behind the Cubs in the wild card standing. And with Yelich out of  the picture, for all manager Craig Counsell’s absence of fear for what’s outside or nowhere within reach of the box, it was too easy to wonder how soon, not whether the Brewers’ tickets home for the year would be punched.

Lots of teams take a refuse-to-lose posture when disaster strikes. But you can count on a single hand how many act like their posture then. The Brewers are 19-4 in September overall—but 12-2 since Yelich was lost.

And after jumping the Reds for six in the first en route a 9-2 win Wednesday night—Ryan Braun’s grand salami on the game’s 20th pitch was merely the opening blow—they had the pleasure of delivering knockout punches to two teams for the price of one: the Cubs, who’ve spent September imploding; and, the Mets, whose post-All Star pluck and jive turned out to be less pluck than jive, after all.

The Brewers are not going to get cocky and kid either you or themselves that this makes Yelich expendable. They may be insane, but they’re not that crazy. But they weren’t exactly a threshing machine before September, either: they entered the month three games over .500 after an August that proved their season’s worst month.

* They took three straight from the Cubs.

* They beat the Marlins two straight before and including the night Yelich kneecapped himself, then beat them two straight more.

* They took two out of three from the Cardinals and three out of four from the Padres.

* They swept the Pirates, whose internal dysfunction this season was the year’s saddest feel-bad story, and now sit on the threshold of sweeping Cincinnati.

Go ahead and say it. The Brewers fattened themselves this month the way the Mets did out of the All-Star break, on preponderantly weaker pickings. But just as the Mets had to figure ways to elude both a bullpen made of 95 percent arsonists and a moment-challenged manager, the Brewers had to overcome:

* An entire roster whose individual wins above replacement-level player this year didn’t even show a single other All-Star level player, never mind anyone within a hundred nautical miles of Yelich’s level. And that’s despite five Brewers hitting 20 home runs or more this season (including Yelich’s 44), two (Yelich and Mike Moustakas) hitting 35 or more as of this morning, and the team’s on-base percentage sitting fifth in the league (.329) as of this morning, too.

* A starting rotation with only one member (Brandon Woodruff) showing a fielding-independent pitching rate under 4.00. (Woodruff missed all of August and most of September on the injured list.)

* A bullpen showing only one member (closer Josh Hader) with an FIP and an ERA below 3.00, with the average FIP (among its regular bulls) otherwise being 4.46. (They might have had a second bull close enough to Hader if Corey Knebel didn’t miss the season following Tommy John surgery.)

Now the Brewers are fighting on two fronts. They have a clean shot at sneaking the NL Central title right out from under the Cardinals’ noses. Or, they might have, if the Cardinals got to finish the regular season against anyone other than the Cubs. The Cubs have imploded so severely that winning even one of the final three this weekend might require a clergyman to verify the miracle.

And the Nats—who had to find ways to survive their own manager’s periodic tactical lapses and their own self-immolating bullpen—won’t have it easy. After they finish with the Phillies today, they get to end the season interleague and against the Indians, still in the postseason hunt despite waking up this morning a game and a half behind the Rays for the second AL wild card.

The Indians won’t make things easy for the Nats. If they could survive a sweep at the Mets’ hands in New York, which proved maybe the true last grand stand of the Mets’ season, and stay in the hunt since, they won’t go down without a battle to the Nats.

But stranger things have been known to happen, including the Brewers being this far in the first place. Maybe the Cubs find enough self pride to give the Cardinals a run for it this weekend. Maybe enough, assuming the Brewers spend the weekend in Coors Field reminding the Rockies (whom they haven’t seen since may) who they’re dealing with, to set up a possible NL Central tiebreaker game.

They’re not strangers to that circumstance. Just last year they forced a division tiebreaker with the Cubs and beat them to force the Cubs to the wild card game they lost to the Rockies. These Brewers don’t seem to fear anything yet. Which gives this year’s almost-as-feel-good Cardinals a little more incentive than just rivalry pride to keep the Cubs in their apparent place on the final weekend.

But don’t bet too heavily against the Brewers, anyway. A team that loses its MVP and carrier and continues the September binge they started with him is not a team who’s going to dry up and blow away upon command.