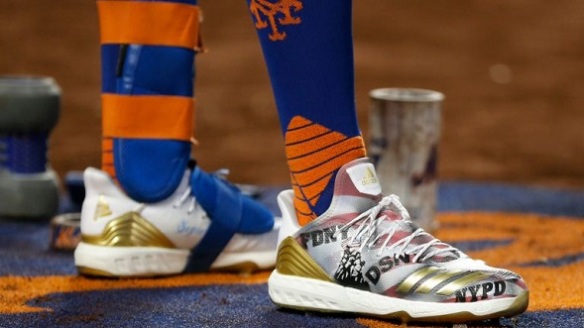 The commemorative cleats the Mets wore at Pete Alonso’s instigation Wednesday night (shown on the feet of J.D. Davis); Alonso didn’t tell anyone outside the team what he was up to, and good for him.

The voices of the Mets’ broadcast team—Gary Cohen and 1986 Mets alumni Keith Hernandez and Ron Darling—wavered emotionally as they spoke of the 9/11 atrocity eighteen years earlier. Cohen then acknowledged the “awkward transition” from commemorating the atrocity to address the baseball game about to be at hand.

Assorted New York first responders lined up along the foul lines with Mets and Diamondbacks players for a playing of “The Star Spangled Banner” before the game. The Mets found a way to defy baseball government’s arbitrariness and wore specially made commemorative cleats, instigated by their Rookie of the Year candidate Pete Alonso.

The cleats featured American flag striping, the initials of first responder agencies, a small image of New York firefighters raising an American flag at Ground Zero, and a silhouette of the Twin Towers. (All teams playing Wednesday night wore commemorative 9/11 ribbons on the right sides of their game caps.) Alonso paid for every pair of the special cleats himself.

He cooked up the plot knowing the commissioner’s office has refused to let the Mets wear first-responder hats in commemoration for every home game played on 11 September. So he did the next best thing. He gathered his teammates’ and manager’s and coaches’ shoe sizes, arranged for the special cleats to be made, and kept his trap shut to MLB.

“I feel like if Major League Baseball kind of got their hands on it, it may not have been approved,” said the first baseman who handed $50,000 of his Home Run Derby prize money to the 9/11-related Tunnel to Towers Foundation. “But I’m really happy that we kind of banded together here in the clubhouse and made something cool happen.”

Those who remember when baseball returned following the mourning period over the World Trade Center atrocity remembered the Mets’ homecoming in long-gone Shea Stadium, after baseball took a break to mourn. They remembered the visiting Braves embracing the Mets pre-game in empathetic grief, and the Mets wearing first-responder police and fire department hats during the game for the first and, thanks to commisioner’s office edict, last time in a live game.

They remember especially the bottom of the eighth that night, with the Mets down 2-1, when Hall of Famer Mike Piazza electrified the stadium, the television audience, and the country with a mammoth two-run homer that flew right into a television camera posted on a special scaffolding behind the center field fence, and put the Mets up 3-2 to stay while Piazza was at it. That bomb just so happens to be the last entry on Piazza’s Hall of Fame plaque.

Then, after all the pre-game commemoration Wednesday night, this edition of Mets—who’ve seemed like crisis junkies one minute and hell on wheels the next, and who’ve managed despite some recent hiccups, bleeps, and blunders to stay within two of the National League’s second wild card—did something even more extraterrestrial than Piazza’s 2001 surrealism.

They shut the Diamondbacks out with . . . nine runs on eleven hits.

Who says the baseball gods in the Elysian Fields watching over Citi Field didn’t know something about doing atrocity victims and their families anniversary honour?

The Mets shook off Diamondbacks left fielder Tim Locastro’s seeming habit of trying to take one for the team, positioning his way into a first-pitch plunk from Mets starter Steven Matz in the first, chased Diamondbacks starter Robbie Ray with a five-run first. The fun only began when Ray thought back-to-back sliders to open against Mets shortstop Amed Rosario was a clever idea but Rosario thought it was even more clever to yank the second down the left field line for a leadoff double.

A strikeout (to Alonso) later, Mets second baseman Jeff McNeil took a first pitch plunk for the team, and—with Ray starting Mets catcher Wilson Ramos with yet another breaking ball—Rosario and McNeil pulled off a nifty double steal with no throw coming up from the plate to set up second and third.

Ramos nudged Rosario home with a bounce out to second and the train kept a-rollin’ when left fielder J.D. Davis shot an 0-2 single on a high line to left that Locastro could have speared on the fly but for an inexplicable hesitation and resulting short hop, scoring McNeil.

Third baseman Todd Frazier shifted the local to the express when he drove Ray’s dangling curve ball into the left center field seats, with Brandon Nimmo—playing right for the Mets, and having missed most of the season on the injured list—busting a speed limit on the rail by hitting Ray’s next pitch into the right center field bullpen. Nimmo ran it out fast enough to tempt you to put him up in a race with the Lexington Avenue Express.

Center fielder Juan Lagares finally ended Ray’s extremely brief evening mercifully with a followup double to the right center field fence before Matt Andriese relieved Ray, shook off a wild pitch, and struck Matz out for the side. Matz himself would cruise for the most part through six innings, other than walking the bases loaded in the top of the second with nobody out, before he ended the prospective disaster with a strikeout and an inning-ending step-and-throw double play.

Led by Alonso’s 47 and Michael Conforto’s 29, Frazier and McNeil hitting their 20th each gave the Mets four 20+ home run hitters in a season for the fourth time in their franchise history. Even in the year of the apparent juiced ball that’s a remarkable achievement.

And the Mets’ too-often-dicey bullpen kept the Diamondbacks from getting past second base the rest of the way. Jeurys Familia had to shake away first and second and two outs to nail pinch hitter Abraham Almonte with a seventh inning-ending ground out to first, and Taylor Bashlor had to shake away first and second and one out in the ninth before he got Jarrod Dyson to fly out to right and pinch hitter Ildemaro Vargas to ground out on the first pitch to end it.

In between those two, Paul Sewald, a veteran but inconsistent at best, got two swift fly outs and a strikeout to make the eighth look like the invisible inning.

It was Ray’s shortest start ever and the shortest for the Diamondbacks since T.J. McFarland got battered for seven Twins runs with only one out on 20 August 2017.

And it almost took a complete back seat to Alonso’s rather daring end-run around MLB’s strictures against commemorating certain tragedies with on-field, in-game apparel. Baseball government elected not to fine the Mets for the gambit. How big of it.

“It just comes from a place where I want to show support to not just the victims but the family members as well because no one really knows how deep those emotional scars can be,” Alonso told reporters. “I just want to show recognition to all the people who are heroes–just ordinary people that felt a sense of urgency and an admirable call of duty. This is for all those people who lost their lives and all of those people who did so much to help.”

Even the Mets know it can never be enough, truly. Not even on nights they defy a capricious commissioner’s office and logic alike, or honour the victims of a terrorist atrocity and their survivors, with nine runs on eleven hits.