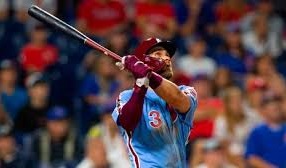 Hitting the salami that ate the Cubs.

Forget the proverbial meal and stewardess. What Bryce Harper hit in the bottom of the ninth in Philadelphia Thursday night should have had astronauts on board.

A game-ending grand slam hit that vapourises a three-run deficit is called colloquially the ultimate grand slam. There are now 29 such salamis in major league history. Harper’s made “ultimate” seem like an understatement.

One night after he led the Phillies to a blowout of the Cubs with a pair of bombs, with neither team nor the Citizens Bank Park aware of a dangerous standoff between a narcotics suspect that wounded six Philadelphia police officers on the north side, Harper continued defying the 2019 narrative calling his season an absolute bust.

He also defied the ugly 1980s-throwback uniforms the Phillies wore Thursday night. The powder-blue threads with pipings down the sleeves, the sides, and the pant leg sides, the that’s-so-80s P logo with the supposed-to-be baseball seam curve inside the loop, with the maroon trim and caps that looked more like caked dried blood than true maroon.

Well, maybe he didn’t there. Hall of Famer Mike Schmidt hit 583 major league home runs in those threads. Most of his home runs were conversation pieces, too. But even the greatest all-around third baseman ever to play major league baseball never did what Harper did Thursday night.

With the bases loaded, one out, and two Phillies runs already home to close a deficit to 5-3, Harper launched a Derek Holland service into the second deck past the right field foul pole. He stood in the box for a moment, holding his bat downward in front of him, watching the ball fly away.

Some accuse him of just standing and admiring the shot. If they’re right, so what. Show me any one of them who’d say they wouldn’t stop to admire it if and when they might hit such a blast, and I’ll show you people who’d flunk a polygraph before the first question is placed in front of them.

From the batter’s box standpoint, though, it looked more as though Harper needed to be dead last certain the ball would stay fair, since it flew straight over the foul line to begin before it tailed away to the left and landed fair about seven rows up that second deck.

Then he shot around the bases like the Road Runner giving Wile E. Coyote the famous bottle cork-popping tongue razz before hitting the jets and going birdius supersonicus absurdius, right into the crowd of Phillies that waited to mob him as though he were the fifth member of the Beatles.

About the only thing to fear when Harper hit the jets was a possibility of his passing Rhys Hoskins running home from first base ahead of him. Except that Harper’s linger in the batter’s box enabled all three Phillie runners to put enough distance behind them that Harper could afford going beep-beep! and tearing up the ground behind his backwash.

Darvish had one of the best outings of his rocky Cubs tenure, striking out ten, and holding a nifty 5-0 lead before Cubs manager Joe Maddon decided it was time to open the bullpen gates. With the Cubs—now tied with the Cardinals for the National League Central lead, and not always looking like division contenders even in their wins of late—having an injury-added-to-insult bullpen that sometimes gets mistaken for those ill pens out of New York, Boston, Washington, and Atlanta, to name a few.

The Phillies snuck one home in the bottom of the eighth on a base hit to right off Brad Wick, spoiling the Cubs shutout, but concurrently spoiling the Phillie rally when Hoskins got himself thrown out trying to score behind Quinn.

But then they chased Wick in the bottom of the ninth, with a little help from Cubs shortstop David Bote—playing there with regular Javier Baez out ill—committing a  throwing error on Cesar Hernandez’s one-out grounder. Scott Kingery singled promptly to set up first and second and pinch hitter Brad Miller promptly singled Hernandez home to set up first and third.

Out came Wick, in came Holland. Into right center went Roman Quinn’s single sending Kingery home, and down to first to load the pads went Hoskins after he was hit by a Holland pitch on 1-2. Here came Harper. There went the ball game. Cubs radio host Julie DiCaro tweeted, “#cubs group therapy tonight.”

“Before I went to the plate, I touched my heart and I was thinking to myself: ‘Why am I not jittery? Why am I not excited?’ But that’s just how I am,” said Harper, whose off-the-charts hitting in some two hundred high leverage situations all season long puts the lie to his starting his mammoth new thirteen-year contract as a high-priced dud.

“I go up there, and each at-bat is the same,” he continued. “I don’t think about bases loaded. I try to get a pitch I can drive and hopefully good things happen. I love those moments. I love those opportunities. I think it helped me a lot from a young age going through those emotions and having those opportunities at 8, 9, 10 years old in big-time games going to different states and cities playing for a lot of teams.

“I just love it. It’s a lot of fun,” he added. “These fans do expect that, and I expect to do that for them on a nightly basis. And if I don’t, they’ll let me know, and I like that too.”

Harper’s blast also meant that, since his premiere in 2012, he’s second only to Atlanta’s Josh Donaldson (seven) for game-ending home runs in the Show. It also left him with seven bombs and fifteen steaks in his past twelve games.

“Knowing his sinker was his best pitch,” Harper said, “(I) kind of cheated the best I could on the inside part of the plate and was able to keep it fair.”

“You have to give credit to where it’s due,” Holland said. “Tip your hat to him.”

It left the Cubs feeling more than just a little abused after being swept in Philadelphia. They’ve felt that way a lot on the road this season. “With the road struggles, being able to win a game here would have been nice,” said Anthony Rizzo, who went two-for-five with a run scored and two driven in Thursday night. “But we didn’t. It’s definitely tough at this part of the season, as opposed to April and May when this happens.”

Darvish continued shaking off his earlier-season struggles to add to a string that now features 26 consecutive innings pitched without surrendering a single walk. He had no problem with manager Joe Maddon lifting him after seven, either. “After the fourth inning I started losing my mechanics,” Darvish admitted. “I think it was a good decision . . . The numbers show good, but I don’t feel that good.”

Nobody in Cubs fatigues or in Cub Country felt that good after Harper shot the moon in the bottom of the ninth. “That one is going to leave a mark,” Maddon said. Leave a mark? More like it blew a hole through the Cubs, whose 23-38 road record to date portends disaster if they reach the postseason. And who have twenty road games yet to play the rest of the season.

With one swing Harper finished yanking the Phillies to a game behind for the second National League wild card. It hasn’t been all fun, fun, fun for these phun-loving Phillies this year, either. But as Thursday night starting pitcher Drew Smyly said, “I think everyone who watches baseball expects him to do that every time he’s up. He’s fun to watch.”

Except when he’s having his fun at your expense.