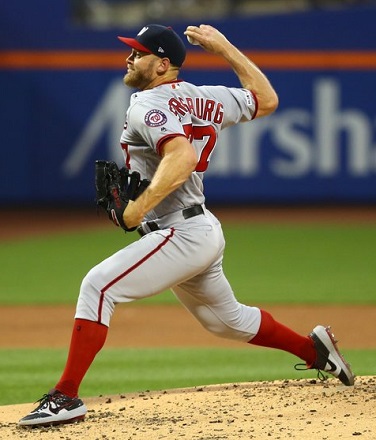 Getting what they needed from Stephen Strasburg Friday night wasn’t enough for the Nationals in the end.

The Friday night loss by itself had a deep enough sting. Nationals manager Dave Martinez, without meaning to, delivered a deeper one to Nats fans post mortem. A sting that carried the venom of Nats collapses past.

Apparently, Martinez was asked the near-inevitable question—why did he stick with Sean Doolittle, after the third of three consecutive bottom of the ninth-opening Mets was a three-run homer re-tying the game at six each, courtesy of Mets third baseman Todd Frazier?

“He’s our closer; that’s what he does,” the manager said. “It was unfortunate, but come tomorrow, I’ll see how he feels, and he’ll be right back out there.”

Be a little afraid, Nats Nation.

Be a little afraid when the Nats—whose bullpen most of the year rivaled the Mets’ for arson charges—reshuffled the pen, added three new pieces at the trade deadline, then had none of them on standby at the first sign of trouble Friday night.

They got what they needed from Stephen Strasburg: seven strong enough innings, including three perfect to open, with Strasburg becoming the franchise’s career strikeout leader while he was at it. And it went for nothing in the end.

Be a little afraid with Doolittle once again at the mercy of the Mets, during a season in which Doolittle entered Friday night’s game having surrendered as many earned runs to the Mets (nine) as he’d surrendered to all his other opponents.

Be a little afraid when one of the Nats’ new bullpen toys, Roenis Elias, turned up with a hamstring tweak just over a week after they’d added him. And, after fellow new toy Daniel Hudson kept the Mets from mischief in the eighth, the third new bullpen toy, Hunter Strickland, wasn’t even a topic.

Be a little afraid when the only Nat bull on standby in the ninth was ancient lefthander Fernando Rodney, who’d actually been pitching well since 25 July, when he blew a save into a loss to the Rockies, going from there to work five games without surrendering a single run, earned or otherwise.

As a matter of fact, since becoming a Nat in early June, after the Athletics released him with a ghastly 9.42 ERA and 5.58 fielding-independent pitching rate, Rodney’s been as close to lights out as at any previous time in his long career: as a Nat, he has a 2.87 ERA and a 3.15 FIP.

But Doolittle is the official closer. And even though the Mets have rather bullied him all year long, Martinez wasn’t going to take his job away after re-claiming a three-run lead in the top of the ninth. Especially after the way they did it, catching Mets reliever Luis Avilan and catcher (and ex-Nat) Wilson Ramos half asleep on a wild pitch when they might have had a shot at bagging Trea Turner shooting home from third.

At that point the Mets looked as though they were going to waste a mostly brilliant start from their new toy Marcus Stroman in his Citi Field debut plus that staggering three-run-deficit closure in the fourth, off Strasburg, after Strasburg manhandled them perfectly through the first three.

So, after Hudson bridged from Strasburg effectively enough, shaking off a one-out double, Doolittle went to work in the bottom of the ninth. And J.D. Davis sent a 1-1 pitch to the back of left field for an opening double, right before their old buddy Ramos shot an 0-1 service like an arrow up the pipe for a single with Davis gunning it to third.

Up came Frazier, the Mets’ elder third baseman. Doolittle started him up and in with a four-seamer. Then, Frazier swung and missed on a four-seamer tailing away from the zone. Then, Doolittle missed high. Then, Doolittle threw something right down the pipe. And Frazier sent it sailing just fair past the left field foul pole and into the second deck.

Coming back from one three-run deficit is enough of a challenge. The Mets just did it twice in the same game, and the second threatened to send the game to extra innings. And Rodney, who’d been loosening up since the bottom of the eighth, still stood in the bullpen, waiting. For the call that never came.

The newest Met, Joe Panik, stepped up. He’d been signed earlier Friday, a few days after the Giants finally parted ways with their veteran second baseman, and after space-choking veteran second baseman Robinson Cano—who’d begun to hit of late but was still a slowed-down liability at second—went down for the count and maybe the season with a torn hamstring.

Wasn’t it true, Don Vito Corleone mused in The Godfather, the novel, that great misfortune sometimes led to unforeseen reward?

Panik isn’t much of a hitter anymore (his 2014-2015 seasons seem like flukes now) but he can still play second base with aplomb and smarts when he’s healthy. And the Mets now have enough hitting otherwise to be able to afford a guy who fits the mold of the old classic good field/barely hit middle infielder.

Now, Panik singled up the middle only to be thrown out on a followup bunt by Juan Lagares off left of the plate. Anthony Rendon, the Nats’ virtuoso third baseman and free agent-to-be, hustled in from third, speared the dead fish and, with Doolittle bending over in front of him, fired a perfect strike to Turner over from shortstop.

Then Jeff McNeil flied out to short right field. Yep. Going to go to extra innings, it looks like. Amed Rosario poked a base hit into left to set up first and second, and up came Michael Conforto, the Mets’ right fielder, a lefthanded swinger with formidable enough power but a sometimes maddening inconsistency at the plate.

Conforto was 1-for-4 on the night and had made the second out of the fourth before Pete Alonso and Davis cleared the fences back-to-back to tie things at three. Now, Doolittle fell behind 2-0 immediately. Conforto fouled off a pair immediately after that.

Time to start deciding who’s going to handle the extras out of both bullpens. The Mets hadn’t yet gone to either Seth Lugo, arguably their best relief pitcher of late; or, closer Edwin Diaz, whose talent couldn’t keep him from becoming an inconsistent mess much of the season, often through usage not entirely of his own making.

And for the Nats Rodney was warm and prepared, just in case. Except that, if the Nats got out of the ninth still alive and didn’t get to pry something out of either Lugo or Diaz in the top of the tenth, Alonso—the Rookie of the Year candidate, whose fourth-inning two-run blast sailed right over the heads of the Mets’ broadcast team stationed just behind the left field fence—would be the first Met to hit in the bottom.

Just in case never came. Doolittle tried coming inside, and Conforto drilled it on a high line just past Nats right fielder Adam Eaton and off the fence to send Lagares home. It took Doolittle only 26 pitches, getting only two swinging misses, to blow up a certain 6-3 win. When the Mets got aggressive Doolittle had no viable answer.

“I don’t have a lot of answers right now,” said Doolittle, the lefthander who has one of the most accommodating personalities in the game today, and who’s unapologetic about riding the “let the kids play”/”make baseball fun again” train. “I’m kind of searching, going over the inning in my head.”

The Mets were so jazzed by that second comeback and win that Stroman popped into the dugout from the clubhouse in nothing but his boxers and Conforto didn’t make it far past first before he was stripped of his jersey and given the Gatorade bucket ice shower topless.

“I absolutely love the way the guys played,” said Martinez to the Washington Post after the game. He had reason enough to love it. “We did everything right until the ninth inning. Just got to keep pounding. Like I told them before, ‘Hey, we come back tomorrow, we got 1-0, and move on’. ”

But he’s not dealing with pushovers in New York anymore. And the Mets’ post All-Star performance now has them nipping close to the second National League wild card. The Nats are a game and a half ahead of the pack for the first card; the Mets are only a game and a half back of them. This weekend is as close to D-Day as both teams can get so far.

If the Nats want to live through this weekend—especially with Noah Syndergaard looming Saturday against Patrick Corbin, Jacob deGrom against Anibal Sanchez Sunday, and these Mets in no mood to roll over and play dead the way they were once supposed to do—Martinez had better come up with a better bullpen plan.

Martinez needs Corbin and Sanchez to pin the Mets’ ears back if that can be done against these suddenly rampaging, suddenly rapacious, suddenly relentless Mets. If they could say thanks large, bud, to Strasburg for three perfect innings with a couple of game-tying, back-to-back bombs off him in the fourth, maybe no Nats starter is entirely safe.

Maybe not even Max Scherzer if he was healthy. And he isn’t. Scherzer cancelled a planned Friday bullpen session as a precaution while he continues trying to recover from back trouble that culminated in a rhomboid strain. A Strasburg conquest Friday night would have gone long to inflate the Nats’ New York morale.

Now even Corbin goes to work Saturday with the proverbial hand tied behind his back. And Corbin’s history against the Mets isn’t that encouraging, either: they’ve beaten him five times while he’s beaten them twice with five no-decisions and a 4.58 ERA against them in twelve lifetime starts.

Corbin and Sanchez might find ways to throttle the Mets, but there’s almost no way Martinez can keep running Doolittle out to face a team that treats him like a burglar caught dead to right trying to lift the jewels and the cash out of the safe.

The Mets have treated Strickland over his career like almost as much of a pinata as they have Doolittle this year. Strickland’s been battered for a .343 lifetime average against him by the Mets. Elias’s hamstring tweak came at a deadlier time than the Nats could have imagined. Rodney’s jacket against the Mets is only slightly more encouraging—they’ve only hit .259 against him for his career. Except that he hasn’t faced them since 2017. And those Mets aren’t these Mets. Not even close.

Both teams’ revivals removed their formerly embattled managers’ necks from the guillotine braces. But Friday night Martinez looked like the guy who was one tick from the blade dropping and Mets manager Mickey Callaway was made to look like the smart guy, if not necessarily a heretofore-undetected genius.

The Nats’ bullpen has been an improved product since May, but they’re not completely resurrected just yet, and they still have their vulnerabilities. The Mets bullpen, formerly virtuosi at incinerating games the Mets either led or looked like they’d have a clean shot at winning, has suddenly quit playing with matches most of the time. Most.