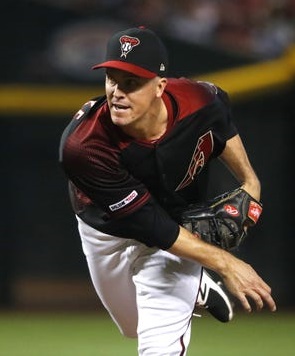 Zack the Knife goes to the top of the AL West heap in Houston . . .

Watching the wheels. Watching the deals. Watching a few other things. And a little staggered when the Astros pulled off an eleventh-minute blockbuster, bringing them Diamondbacks ace Zack Greinke.

“The Astros just won the World Series,” said more than one tweeter, which is putting the proverbial cart slightly ahead of the proverbial horse, but let them have their fun for now. To get Greinke, the Astros sent a pair of righthanded pitchers (Corbin Martin and J.B. Bukaukas), first baseman Seth Beer, and infielder Josh Rojas.

In other words, Greinke didn’t cost the Astros absolute prime prospects. And their postseason chances do improve tremendously adding Greinke to a rotation already paced by another future Hall of Famer, Justin Verlander.

Before that, here’s what the running order was on D(eadline)-Day:

* The Yankees’ medical parade continues with Luke Voit facing sports hernia surgery. He’s not expected back until “well into September,” according to manager Aaron Boone.

* The surrealistic three-way between the Indians, the Reds, and the Padres barely settled in when the Reds sent pitcher Tanner Roark and cash to the Athletics for a minor league player Wednesday.

* Noah Syndergaard’s outing against the White Sox Tuesday night pretty much pulled him off the trading floor for the Mets, who might still think about moving Zack Wheeler (starter) and Edwin Diaz (reliever). The Yankees and the Braves were thought still interested in Wheeler as of 11:30 Pacific time today.

* The Nationals’ bid to remodel their season-long-dubious bullpen (behind closer Sean Doolittle) got a bump when they landed Daniel Hudson from the Blue Jays for Kyle Johnston (prospect), and added Roenis Elias from the Mariners while they were at it.

* The Astros missed Martin Maldonado behind the plate more than they thought: they brought him back in a deal with the Cubs, sending the Cubs recently-DFA’d Tony Kemp. Maldonado’s a spaghetti bat but he’s more effective behind the plate than any Astros incumbent, still.

* Barely half an hour after nailing Hudson and Elias, the Nationals dealt for . . . Hunter Strickland, the former Giant renowned for carrying almost three-year-old grudges and doing something about them at Nats’ expense. (Shame Bryce Harper isn’t a Nat anymore. P.S. The brawl Strickland set off by hitting Harper helped put paid to Michael Morse’s career after his collision with Jeff Samardzjia.) The Nats sent the Mariners Aaron Fletcher.

* The Phillies dealt for Pirates outfielder Corey Dickerson, looking to fortify for a last-ditch stretch run without sacrificing heavy prospects but with sending the Pirates a nice pile of money to use for international signings. Dickerson homered twice in the Tuesday night game against the Reds—and those bombs were almost forgotten when the scrum heard ’round the world (thanks to Reds outfielder Yasiel Puig being traded to the Indians during the game) broke out in the ninth.

Come to think of it, Dickerson played for the Pirates against the Reds Wednesday. If he arrives to the Phillies in time to suit up for Wednesday night’s game, he’d be only the fifth player in MLB history to play for two teams on the same day. (The last: Joel Youngblood, for the Mets and the Expos, in 1982.)

* The Braves also dealt for Giants reliever Mark Melancon and Tigers reliever Shane Greene. With the Giants reportedly taking care of much of the rest of Melancon’s salary.

* The Giants’ big deal with the Brewers turned out to be the Giants sending the Brew Crew pitcher Drew Pomeranz (starter) and righthanded reliever Ray Black in a swap for infielder Mauricio Dubon.

* The Giants also sent reliever Sam Dyson to the Twins, for a trio of prospects, fortifying further a Twins bullpen that already added former Giant Sergio Romo last Saturday night. Around the same hour, the Giants picked up second baseman Scooter Gennett—a rental who hits free agency this fall—from the Reds for cash considerations. The Giants are risking Gennett having something left for the season after missing most of it with a groin injury.

* Madison Bumgarner (Giants), Zack Wheeler (Mets), Mike Minor (Rangers), Felipe Vasquez (Pirates), and Syndergaard are staying put for now. Wheeler was more of a trade possibility than Bumgarner, really, with the Giants unexpectedly back in the thick of the wild card race but the Mets outliers with a thread-slim shot at it.

Other than Greinke to the Astros, then, it seems the big story of the first single trade deadline (there’s no more non-waiver deadline in August) is the Braves and the Nationals overhauling their bullpens. On the same day the Braves beat the Nats to take a three-game set and put a little more distance between themselves and the Nats in the National League East.