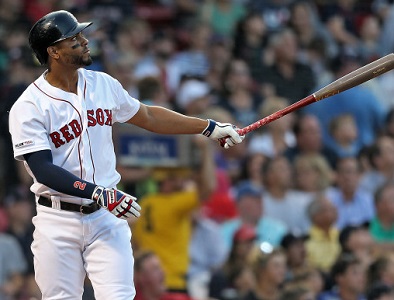 Xander Bogaerts hitting the first of a pair of home runs to kick off the Thursday night massacre; the second bomb he wanted to hit when he spotted Mom in the seats.

The carnage began in the bottom of the first and finished by the bottom of the eighth. And when Nathan Eovaldi, the Red Sox’s resurrected pitching toy moved to the bullpen upon his return, shook off a one-out single to turn the Yankees aside in the top of the ninth, even the Fenway Park faithful who thought they’d seen everything in this century-plus old rivalry were too exhausted to cheer.

They may even have been too exhausted to wonder what maybe everyone else in baseball wondered, namely why Yankee manager Aaron Boone had no apparent way to keep his All-Star starting pitcher Masahiro Tanaka from taking maybe the worst beating of his major league life. Or, why the Yankees had no apparent way to stop the Red Sox from burying them 19-3, the worst the Red Sox ever laid on the Yankees in the entire history of their to-the-death rivalry.

A twelve-run beating all earned in three and a third innings’ work. A beating that only began when Tanaka couldn’t get a single Red Sox out in the bottom of the first, before Xander Bogaerts with first and second jumped on a down-and-in fastball and drove it over the Green Monster seats onto the street. A beating that ended when Tanaka surrendered a two-run ground rule double down the right field line to Mitch Moreland in the fourth.

Tanaka had his relief Stephen Tarpley to thank for surrendering number twelve on his dollar. Leaving him the most badly-abused pitcher in Fenway since then-Red Sox manager Bobby Valentine, also inexplicably, left his starter Jon Lester in to take an eleven-run battering in 2012. If these were marriages, Tanaka and Lester could have demanded domestic violence charges.

Maybe Boone didn’t want to incinerate his own bullpen too early, and maybe you get that to an extent, but the extent ends when a Tanaka who’d just been torn for five earned in five innings against the Rockies in his previous start barely escapes the first with seven runs and then gets sent forth for further use, misuse, and abuse.

It actually looked as though Tanaka might survive after Bogaerts’ blast, the longest of the Red Sox shortstop’s career, when he got J.D. Martinez to fly out to center immediately following. And even when the Red Sox loaded the bases on him just as immediately, his odds increased when he got Christian Vasquez on a measly pop out to Gleyber Torres, the Yankee shortstop whose RBI single in the second accounted for a third of the Yankee runs on the night.

But then Jackie Bradley, Jr. tore a two-run double to right and Mookie Betts, the defending American League Most Valuable Player, tore an immediate two-run double to the back of the park. Just like that, Tanaka’s hope of coming out of the first with his Yankees staying within reach disappeared almost as fast as Bogaerts’ bomb.

About the only thing that could possibly disappoint Bogaerts was that his mother, his uncle, and a couple of his Little League coaches hadn’t arrived in Fenway in time to see the first-inning blast. The Aruba native wanted nothing more than to hit one out with Mom in the ballpark. He got his wish—in the bottom of the eighth.

By which time the Yankees decided their pitching staff was abused enough for the night and Boone sent catcher Austin Romine to the mound to take one for the team. Did he ever. Red Sox catcher Sandy Leon pounded a two-run homer into the right center field bullpen with nobody out. Then, after third baseman Rafael Devers flied out, up stepped Bogaerts.

“The last at-bat,” Bogaerts said after the massacre, “I saw my mom there and I was like, ‘I’m going to try’.” Romine threw something up to the plate that hung so high it might get a real pitcher convicted by his team’s kangaroo court if it has one. And the only thing keeping Bogaerts’s launch from leaving the ballpark entirely this time, with the nineteenth Red Sox run, was the National Car Rental sign atop the back of the Monster seats.

Just a week after Boone made headlines with a vulgar rant at an umpire in which he called his players “savages” in the batter’s box to raise his esteem among Yankee fans, and Yankee first baseman Luis Voit turned the rant into T-shirt fodder for his mates,  it was the Red Sox looking like savages enough with 23 hits on the night to make the Yankees—with all of seven hits and three almost excuse-us runs on the board—think twice about savagery as motivation.

Some record books took almost as much of a beating as the Yankees did Thursday night. Eight Red Sox had at least two runs batted in on the night to tie a major league record. For the first time in the rivalry’s history the Red Sox beat the Yankees with a sixteen-run differential. For the first time ever, a Yankee starting pitcher surrendered twelve runs or more while getting ten outs or less.

And if you thought the Yankees got sunk by the Red Sox, the forty runs Yankee starters have allowed over their past five games is the most in any five-game stretch of Yankee starting pitching since the year the Titanic sunk. Thursday night the Red Sox were the iceberg. Not even a Yankee ship that’s pretty sharp at coming in from behind this year could avoid that.

And it almost doesn’t matter that before this five-game struggle Yankee starters had a fourteen-game run in which they posted a collective 2.88 ERA. All season long the Yankee rotation’s been in enough need of an upgrade. All month long the eyes of trade deadline watchers have been on whomever the Yankees might have eyes for.

This five-game stretch is probably going to drive the price for any trade deadline upgrades upward. Sellers must have looked at Thursday night’s climax to the five-game leaking and said, “Thank you, Boston Red Sox!” Not that they’re going to get super rich in the return hauls, necessarily. But they might maybe be able to hold the Yankees up for a little bit more out of the prospect bank than the Yankees might have thought they’d have to surrender.

Meanwhile, Red Sox starting pitcher Rick Porcello has been living something of a charmed life of late. Thursday night’s were the lowest amount of earned runs he’s surrendered in his four July starts—all of which got him credited with wins. He gave up six each against the Tigers and the Orioles, teams not necessarily known for striking fear into the hearts of opponents this season, and he surrendered four to the Blue Jays in a mid-month assignment.

“It seems like the last three or four games I pitched we put up damn near 20 runs,” Porcello said in something of a daze after Thursday night’s thrashing. “Run support is huge. And when we’re scoring like this, you do the best you can not to screw it up.”

And the Red Sox must be thinking it was one hell of a way to get motivated for what could well be their last stand. They go from hosting the Yankees this weekend to hosting the Rays—from whom they took two of three in Tampa Bay before they sank the Yankees Thursday night—for three at Fenway before going to the south Bronx to meet the Yankees for four more.

They’re still ten games back in the American League East and a game and a half back of the league’s second wild card. If the Red Sox are going to make their season once and for all, this may be the stretch in which to do it once and for all. Because by the time they meet the Yankees for a final set of the season in September in Fenway, the weekends and week to come may have sealed their fate. May.

“We were coming from a horrible series and bounced back [against the Rays],” said Red Sox manager Alex Cora. “Now it’s New York, the best team in baseball. Win this series and see where it takes us. Let’s not get too far ahead of ourselves. We know what we have to do. There’s no hiding.”

They surely reminded the Savages about no place to hide Thursday night. But was it the Red Sox’s continuing re-ignition or just what a certain lady once said on the radio might be just a fancy passing?