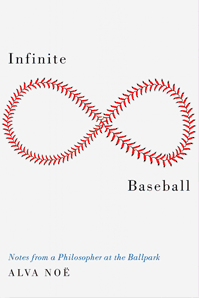 “This,” warns University of California Berkeley philosopher Alva Noë in his preface, “is a book about baseball by a philosopher. But do not be alarmed. It is not a work of philosophy, at least not in the conventional, academic sense.” Before getting to the meat of Noë’s Infinite Baseball, whose cover displays the charming twist of a baseball’s stitches into infinity’s symbol, I wasn’t sure whether to thank him or spank him for that.

But he does almost finish his preface by calling it a philosophical game after explaining his grounds for that. “It’s not a quantitative game,” he writes. “It’s a normative game, for its main concern is who deserves credit or blame for what.”

Infinite Baseball is a small collection of essays written for NPR’s former science and culture Website 13.7: Cosmos and Culture. Noë goes forward to reassure that he is indeed writing as a philosopher about a game that is as metaphysical as philosophical, though Noë doesn’t say the metaphysical part.

Aside from thinking baseball’s main concern was one team putting more runs on the scoreboard than the other, I also get that Joe and Jane Fan in their ballpark pews or television seats often seem more animated by blame over a loss than credit for a win. So do Joseph and Janette Front-Office Muckety-Muck, who have the power Joe and Jane Fan merely dream of wielding, the power of the purge.

The italics in the aforequoted sentence were Noë’s. The timing of the book’s publication was impeccable: April Fool’s Day. Except that he isn’t kidding around when, in his more involved introduction, he says baseball is more than just the players on the diamond:

Baseball is also the practise of trying to understand what the men on the diamond are doing not only while they are doing it but in the larger setting of the game’s past and future. It is something that engages not only the coaches and managers and trainers but also the players and umpires and fans. Take away the reflection on and you are left with mere activity–with something robots could do. And that’s not baseball. Baseball without umps and coaches and fans and players trying to decide what’s happening on the field of play would no more be baseball than justice would be at work in a courtroom in which there were no parties to dispute vying with each other to resolve their conflict.

The idea that baseball is too slow is based on the premise that only explosive plays and big hits count as action. But baseball is more subtle than home runs and double plays. When the batter steps out of his box and fixes his batting gloves, or weighs his bat, or scratches around in the box, he’s not wasting time; he is surveying the situation before him, reading the signs, trying to figure out what pitch to look for. He is working. For the knowledgeable fan, these are moments of tactical complexity and high suspense. There’s a lot going on and there’s a lot for the spectator, together with the player, to try to appreciate. The same is true of mound visits by the coaching staff. In those moments, the coach is like the corner guy in a boxing bout; with his words he makes it possible for the pitcher to keep on pitching.

Noë thinks television obstructs that view to a certain extent, and to a certain extent he’s right. You suspect a lot of fans might be influenced by the scene in Bull Durham in which catcher Crash Davis, pitcher Nuke LaLoosh, the entire infield, and the bench coach confer on the mound—about things having little enough to do with the game and more to do with wedding gifts and religious sacrifice. It made for comic relief and distorted baseball. Real catchers and coaches won’t go to lengths that extreme to settle a pitcher down.

Baseball isn’t a perpetual motion sport, and Noë knows it. It provokes contemplation as well as drama; reflection as well as excitement. Perhaps the reason so many writers over so many generations took to baseball as an analogy of human life itself, above and beyond other games, is that they know life is not perpetual excitement. Even the most successful lives, normally, involve genuine excitement maybe a quarter of the time.

If I were to tell you nothing more than the Dodgers dropped fifteen runs on the Reds in the first inning, you might say, “Yep! That’s today’s baseball, and that’s just wrong!” You might assume the Dodgers, powerful enough in a high power era, absolutely bludgeoned the Reds. You’d be wrong. It wasn’t this year’s game. It was 21 May 1952 . . . when the Dodgers belonged to Brooklyn and played in a little temple called Ebbets Field.

And, except for Hall of Famer Duke Snider’s two-run homer off Ewell (The Whip) Blackwell to start the carnage, no other Dodger runner scored on a home run. Except for a pair of bases-loaded walks and a bases-loaded hit batsman, the remaining thirteen runs in the inning came home on singles. One homer-exhausted fan might look at that and have a hearty laugh. Another might see a swarm of tactical ground support awaiting the heavy bomber(s) that never showed up.

(Blackwell was lifted after surrendering a third Dodger run. Legend has it that no sooner did he return to the team hotel, leaving the park in disgust, than the Whip went to the bar, and saw two things: the television set showing the game still in the bottom of the first, and his own relief Bud Byerly coming into the bar after he’d surrendered a walk and four straight RBI singles. Baseball being a game of sometimes mordantly organic humour as well as metaphysical joy, you hope that’s a true story.)

You think the game qua the game is too slow for comfort? Ask yourself how you’re feeling when one team drops a 19-1 blowout on the other with most of the runs scoring in the first inning, and you still have eight more innings to watch. Other than two Dodger runs each in the third and the fifth, and one Reds run in the fifth (trivia buffs: it was Dixie Howell hitting a two-out solo home run), the rest of that game must have been a snooze. Bludgeoned into a nap. Right?

“It takes not only experience but also curiosity and patience to realise what’s at play in a baseball game,” Noë writes. Good luck with that, if you’re aware of the American prayer cited several hundred times to my knowledge in the past three decades: “Lord, grant me patience—and I want it right now!”

Inside Baseball‘s first essay is called “Do We Need to Speed Up Baseball?” Noe, you might have guessed, says no way, Jose (Altuve and otherwise): “Players and spectators alike need to slow down and let baseball happen.” Its next essay is called “In Praise of Being Bored.” Stop snorting and think about it: “I say, God save us from today’s ramped-up, multi-interrupted, selfie-consumed, fast-paced world! We need to slow down. We need to turn off. We need to unplug. We need to start things and not know when they are going to end. We need evenings at the ballpark, evenings spent outside of real time.”

Instant replay. He’s a converted skeptic but still accepts the humanness of umpires.

Television. When it comes to baseball, Noë tolerates it—barely, because it leaves certain elements unseeable or undiscernable for all that it allows a viewer to see now as opposed to in its infancy.

Scorekeeping and performance numbers. He calls it all a “forensic” act, by which he doesn’t mean to equate it with performing an autopsy.

No-hitters and perfect games. Noë laments batters getting no credit for walks or taking one for the team to reach base otherwise; he also believes a perfect game—like a lot of other things credited to pitchers—is at least half a team accomplishment, however fun it is admiring a pitcher who pitched such a game.

Sabermetrics. He calls it (and the essay in which he addresses it, not always by name)  “The Numbers Game.” Noë finds it useful for true analysis and evaluation but not for controlling value. My own experience is that you’ll find as many sabermetric stat geeks declining to allow it to control all value as attempting to allow it. Makes for one of the great sub-pastimes of baseball: arguments.

Pharmacy. Noë believes there’s not as much wrong as you think with baseball players and other athletes accepting pharmaceutical help, especially with injury recovery, especially when the governors of their sports tell them, in essence, “You can’t pick and choose your pain relief! Only we can pick and choose your pain relief.” (He also thinks there’s something weird when people object to people augmenting things their bodies produce with . . . things their bodies produce.)

He doesn’t address it, but my own question is whether there’s hypocrisy in Joe and Jan Fan not going “boo” when baseball’s governors approve team medical staffs administering a steroid known as cortisone—in such abundance as to risk long-term, post-baseball health—while they’re screaming bloody murder over which players sought steroids (and other actual or alleged performance-enhancing substances) by any other names.

As a society, we seem to have a totally incoherent set of values regarding the place of medicine and technology in the cultivation of athletic talent. We categorically prohibit the use of strength-building and injury-protecting PEDs, yet we allow surgical interventions like Tommy John (surgery) to become business-as-usual, letting pitchers use their body well beyond biologically sanctioned safety and performance specs.

Social media and the game. Noë wonders aloud whether the combination hasn’t produced “a whole new and very brutal kind of reality TV,” using the botched Mets trade of Wilmer Flores for Carlos Gomez in 2015—the news of which reached the fans in the stands before it reached the Mets’ social media-lacking then-manager, Terry Collins, whom Noe thinks proved “above it all” instead of “out of it”—as a microcosm in the middle of which the hapless Flores “was made to live out a social media lie.”

Within two days the Mets backed out of the deal (Gomez’s hip was an issue at the time; this year, he re-joined the Mets) and Flores punctuated his hoped-for reprieve with a game-winning home run off Nationals reliever Felipe Rivero. It helped launch the Mets’ stretch resurgence and the Nationals’ stretch fade. Go figure.

“The Matt Harvey Affair” (that, too, is an essay title)—no, silly, not the one that finally rousted the former Dark Knight out of New York last year, the one that left people “blindsided” in 2015 when Harvey (the nerve of him!) preferred to listen to his doctors (as a post-Tommy John surgery pitcher) and ease his workload until the postseason. And people wonder why when it comes to medicine baseball is more often The Daffy Doc than Dr. Michael DeBakey.

The knuckleball. Noë wonders why so few pitchers take it up in the beginning instead of as a last resort, since the pitch “can be so devilishly effective.” (He wrote the essay after R.A. Dickey, late-career knuckleballer, became the first making it his money pitch to win the Cy Young Award.) Baseball people still dismiss it often as just a trick pitch, a novelty pitch—despite Hoyt Wilhelm and Phil Niekro going into the Hall of Fame after making long careers throwing it. How many novelties are that tricky to master?

You’ll have to navigate your way through a few spells of awkward prose in the preface and the introduction (what? no foreword?) to get there, but Noë’s essays achieve the one thing baseball at its best and baseball writing at its best should achieve, even when it doesn’t convince or convert you so much as it interests you: Provoke thinking, re-thinking, arguing, and re-arguing. With far less animosity, and not a lick of the coarsely vulgar tongue that’s become epidemic in our public discourse.