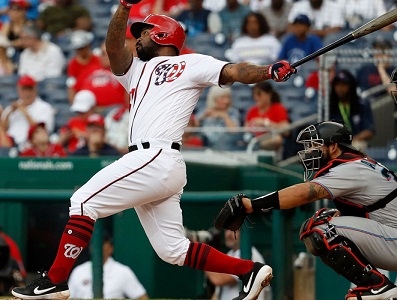 Howie Kendrick opened Sunday’s scoring with a blast over the scoreboard in right center . . . and, what a surprise, the Nats’ bullpen almost blew even a 9-0 lead before hanging in to win somehow . . .

Maybe there are times when a manager getting the dread “vote of confidence” from the front office is good for a club? Maybe. The Mets and the Nationals are arguing the affirmative in baseball’s court.

But the Nats damn near blew the case on cross examination Sunday afternoon. And they were lucky to escape with a 9-6 win.

Last Monday, the Mets went home from a disaster in Miami with Mickey Callaway facing execution. You could have fit in a closet every observer who didn’t think Callaway was going to get it, good and hard.

Then the Mets went forward to win six out of seven, including a four-sweep of the Nationals—whose own manager Dave Martinez has been on watch for a date with the guillotine—and back-to-back against the usually hapless Tigers after losing one the hard way Friday night but winning almost the hard way Saturday and Sunday.

Before the Nats opened against the likewise ordinarily hapless Marlins Friday night, the Nats’ brass, specifically ops president Mike Rizzo, gave Martinez the dread vote of confidence. With practically every Nats observer wondering when, not if Martinez was really going to be strapped into the guerney or the electric chair, depending on the mood of the brass.

So what did the Nats do? They took the first three from the Marlins with Max Scherzer due to go Fishing on Memorial Day.

But almost as if according to the script every Nats fan in creation has memorised this season, the bullpen couldn’t even let a 9-0 lead the Nats built before the seventh inning Sunday go unmolested. Scherzer could be forgiven if even he entertains a moment’s thought that Monday could become his memorial.

Maybe Patrick Corbin understood more than he’d come right out and say Saturday, when he talked Martinez into letting go out for the ninth and finish what he started, a four-hit shutout in which his mates rewarded him with a five-run fourth. Nothing to it, folks?

“I felt good,” the Nats lefthander said after the game. “I thought I could get three more. So I said I’ll get the next three.” Because, Skip, you and me both know saying we have a bullpen is like saying Ma Barker’s running the day care center.

On Friday night, after a lot of back and forth and yet another infamous bullpen implosion, Juan Soto smashed a three-run homer in the bottom of the eighth to yank a lead back, Matt Adams followed him with a bomb, and closer Sean Doolittle—abused in New York—shook off a ninth inning leadoff launch (from Jorge Alfaro) to close out the 12-10 win.

The Nats felt good enough after Corbin’s shutout that Victor Robles, who was nearly decapitated by a pitch Saturday night, hit the pregame batting practice cage Sunday wearing a full fire helmet to laugh it off. With these Nats, this season so far, there’s nothing like a rare pair of back-to-back wins to let a man shake off disaster with a pre-game gag.

Then Erick Fedde—whose splendid start in New York got ruined by (stop me if you’ve heard this one before) the bullpen and some late but frisky Mets hitting—cranked up and went to work. He worked so fast his first two innings Sunday you’d have missed them if you blinked even once.

Howie Kendrick slowed the lad down the right way when he led off the bottom of the second and wrestled Marlins lefthander Caleb Smith—bringing a .173 batting average against him into the game—to a ninth pitch that he sent four rows into the right center field seats above the Nationals Park scoreboard.

When the Fish decided to snap at Fedde in the top of the third, the Nats said not so fast, kiddo. Nats catcher Yan Gomes whipped Migeul Rojas—aboard second after a leadoff single and a Smith sacrifice—out, right on the snoot, trying to steal third. Adam Eaton ran down and pounced on Harold Ramirez’s double down the right field line to keep Curtis Granderson from even thinking about scoring. And Fedde struck Neil Walker out on a delicious curve ball with the bases loaded to finish that threat.

Then Kendrick shot one past shortstop into left center to send two home in the bottom of the third, just moments after Adeiny Hechavarria in New York launched a three-run homer to pull the Mets back and ahead of the suddenly tenacious Tigers, 4-3 in the sixth for a score that held up despite a dicey ninth. And Brian Dozier promptly banged one off the top of the scoreboard to send home another pair of Nats. All that with two outs, yet.

With Smith out and Wei-Yin Chen opening the bottom of the sixth on the mound for the Marlins, Gomes opened with a double and pinch hitter Michael A. Taylor (for reliever Tanner Rainey) doubled him home. Eaton reached on an infield hit to set up first and third for Anthony Rendon, and the third baseman banged a two-run triple off the center field fence before Juan Soto sent him home with a sacrifice fly just deep enough to count.

This kind of Nats largess just couldn’t go unpunished, could it?

Javy Guerra shook a leadoff hit off in the seventh but, with one out and one on in the eighth, he fed Walker something so meaty Walker would have been cited for neglect if he didn’t drive it over the center field fence.

Martinez felt safe enough with a now-seven run lead to hand rookie James Borque his first major league assignment. Borque is a righthander who sports a thick mustache with hints of Hall of Fame reliever Rollie Fingers’s famous handlebars on either end. He sported anything but Fingers’s equally famous command in his maiden voyage.

He turned a leadoff walk into Miguel Rojas dialing a sharp Area Code 4-6-3 and a huge heave of relief. Unfortunately, he served a followup double by Rosell Herrera and a five-pitch walk to Garrett Cooper. Then Ramirez’s grounder to the back of second tied Dozier’s hands against throwing him out and the Fish had ducks on the pond that sat there just long enough for Anderson to send a three-run double to the back of the yard.

Martinez reached for Wander Suero post haste to spare the rook any further humiliation. Walker shot an almost immediate RBI single up the pipe before Suero somehow managed to strike Starlin Castro out to finish at last.

With a 9-0 lead you’re in a position where you can just about dare the other guys to swing away. Doesn’t mean it’s smart to make the offer in the first place. When, oh when, Nats fans must have asked, will this bullpen quit making things between difficult and impossible even when they’re so simple a child of five could navigate them?

The Nats out-scoring the Fish 26-10 on the weekend so far is just a little more comfortable than the Mets in New York out-scoring the Tigers 17-16 while all three games were decided by a single run. So why does it feel that the Mets had an easier time of things?

Votes of confidence have gotten a little mojo working for the Mets and the Nats so far. Memorial Day may not be so simple. Scherzer may have a simple enough time of it, even if he might have to think about becoming his own setup man at minimum. But the Nats may have one moment of pity for the Mets, who have to deal with the Dodgers in Los Angeles starting on Memorial Day.

And unlike the Nats last week or the Tigers in the end this weekend, the Dodgers don’t know the meaning of rolling over and playing dead. Forget their manager, the Mets themselves need a vote and a shot of confidence, even with Jacob deGrom opening against Clayton Kershaw. Maybe a three-finger shot. Or, a howitzer.