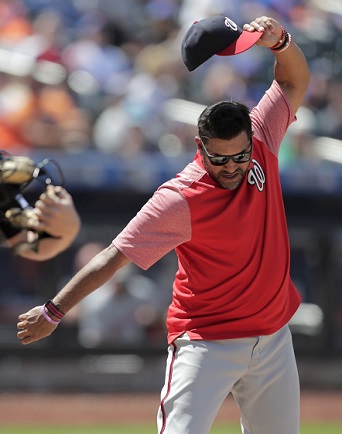 Dave Martinez may have been frustrated by a lot more than just a checked-swing strikeout getting his hitter and himself tossed Thursday afternoon.

When this week began, the Nationals went to New York in the somewhat delicious position of maybe holding the fate of the Mets’ embattled manager in their hands. Starting with the day Mickey Callaway received the guaranteed-to-make-you-shudder vote of confidence from the Mets’ brass after their weekend of Miami vice.

The week is now almost over. And it’s the admittedly injury-battered Nats going home to face the same Marlins this weekend who made life so miserable for the Mets last weekend, before the Mets did to the Nats what the Nats could have done to the Mets: the possible conversion to “when” from “if” manager Dave Martinez would be the toast of the tomb.

It must have been in the back of Martinez’s mind Thursday afternoon, when he got himself thrown out late in the game after hustling out futilely in the top of the eighth to pick up where his freshly-tossed batter Howie Kendrick left off.

Kendrick got the ho-heave for arguing a checked swing third strike with plate umpire Bruce Dreckman despite a few television replays showing his bat crossed the front of the plate by a fingertip. Martinez went out and put on a show that would have gotten him laughed out of Lou Piniella’s, Billy Martin’s, and Earl Weaver’s taverns post haste.

He spiked his hat so weakly despite a hefty windup that it almost spun like a paper plate around the batter’s box. He didn’t kick dirt so much as he brushed it almost lazily around the plate. Not a drop kick or a dirt punt to be seen. Dreckman must have thought he was throwing Martinez out of the game not for insubordination but to spare the poor chump any more embarrassment than he must have felt already.

The good news was the Nats putting an end to Mets reliever Robert Gsellman’s fifteen-inning scoreless streak almost the moment Martinez disappeared and turning a 3-1 deficit into a 4-3 lead. The bad news was Wander Suero throwing enough of a bloated diet of cutters in the bottom of the inning that Carlos Gomez whacked a three-run homer to turn that lead into a 6-4 Mets lead and, in very short order, Nats loss.

A four-game sweep from the team whose own manager they could have guaranteed assassination this series. At the helm, a manager of their own who really does seem to be in so far over his head he can look up and not see the propellers of any ship sailing above.

But on Thursday the Mets turned Callaway’s own eighth-inning brain vapour into a virtue by default. After reversing his early season proclamation that there’d be no way Edwin Diaz would see four-out save chances so soon if at all, Callaway now seemed to reverse his reversal. He needed a four-out save try from Diaz to keep the Nats from overthrowing that 3-1 lead. He didn’t go for it.

Callaway got bloody lucky that Gomez caught hold of the Suero cutter that didn’t even pinch. And that prompted another Post baseball writer, Barry Svrluga, away from being quite as kindly as Boswell was a day earlier. “Who cares about Dave Martinez?” went the headline on Svrluga’s column within an hour after the Mets finished the sweep. “In a lost season, Nationals face tougher decisions.”

The National League East race that was supposed to be between four teams has been shrunk to a two-and-a-half-team race before May’s finish. Nobody knows just when Callaway’s stay of execution expires, but the Nats go home from New York with Martinez’s execution orders possibly being drawn up as I write.

Every detailed account I’ve read to date tells me Martinez knows how to get along with and manage people and personalities. Those of his players who’ve disagreed with how he’s deployed them admit he listens to their complaints, discusses them, never holds the complaints against them, and even (as Boswell pointed out) admits when he blunders. If you could take your baseball sins to a confessional, Martinez could be accused of melting the priest’s ears off.

After cashiering Dusty Baker for blowing a postseason win Baker had absolutely nothing all that much to do with blowing, the Nats hired Martinez figuring, reasonably, that anyone who spent a decade total as Joe Maddon’s consigliori—including a surprise World Series gig for the Rays and an even bigger surprise World Series conquest for the Cubs—couldn’t possibly let the needs and necessities of baseball games leave him stuck for answers.

This week the earnest, glass-half-full Martinez was stuck for too many answers while he was out-generaled by a Mets manager about whom you can say it’s pushing it to hand him a rank higher than master sergeant. It got out of hand enough that even when Martinez did the right thing—bringing in Sean Doolittle to stop the bleeding and keep it close in the eighth Wednesday night—it blew up in his face.

First, the customarily reliable Doolittle plunked Gomez in the elbow guard to load the bases. Then, Juan Lagares cleared them with a double that weird-hopped off the bottom corner of the left field wall padding. Then, Martinez elected to put former Nats catcher Wilson Ramos on first intentionally to let Doolittle get to Mets pinch hitter Rajai Davis.

Davis, a fading journeyman three years removed from his greatest glory, a mammoth Game Seven-tying two-run homer in the 2016 World Series. Davis, who signed a minor league deal with the Mets last December, was called up from their Syracuse minor league team, and had to hire an Uber driver to take him from Scranton to Citi Field—where first he couldn’t find the park, then he couldn’t find the clubhouse, and didn’t meet his new boss until the fifth inning.

That’s so Mets, the world and probably the Nats in hand thought when Davis went out to bat for Mets reliever Drew Gagnon. In probable need of atoning for meeting the new boss late on the first day of his unlikely promotion, Davis hit a three-run homer and put the game far enough out of reach that Callaway would have wasted Diaz by sending him out for the ninth, instead ending the game and the Mets’ win with a (Tyler) Bashlor party.

To the Nats it must have felt as though this was becoming just so Nats.

You can’t hold Martinez responsible for Adam Eaton missing first on Thursday, or for Juan Soto being stranded after a leadoff triple, or for Yan Gomes throwing the ball into center field with no backup crossing over behind second, or for Suero showing so many cutters Gomez could have swung a meat cleaver through it and sent both halves over the fence.

But Martinez “hasn’t fixed those unforgivable ‘little things’,” Svrluga writes, almost mercilessly, “and they’re killing this club; strategy-wise, he’s too often chasing the game, trying to solve yesterday’s problems today; and worse, he can’t offset those deficiencies with his presence, which is far more part-of-the-wallpaper than let’s-go-to-war.”

Including thoughts of turning Anthony Rendon into fresh talent, Doolittle into something more in the bullpen than yet another helping of bull, and even Max Scherzer into value before Scherzer can exercise his 10-5 rights and stamp REJECTED on any possible trade.

Including thoughts of retooling around a pretty solid core of Turner, Soto, Victor Robles, Stephen Strasburg, and Patrick Corbin. And maybe even Erick Fedde, who gave the Nats a terrific chance to win Tuesday night before Martinez suddenly had no choice but to turn that game over to the Show’s number one arson squad. Of arsonists, not firefighters.

“The Nats still can’t defend against a safety squeeze bunt or remember that the cutoff man is not twenty feet tall or grasp that a baserunner’s first responsibility is to avoid getting picked off,” Boswell wrote. “The Nats still regard turning double plays as optional; they need a manager who regards it as a prerequisite to remaining in the lineup tomorrow. Pitchers, including Max Scherzer (and Wander Suero), don’t seem to grasp that giving up a gopher ball on an 0-2 pitch is about the dumbest thing you can do.

“Martinez addressed all these issues,” he continued. “But after 210 games, they haven’t changed. The Nats now have a clubhouse . . . in which no one is above the law. So why all the recidivist scofflaws?”

General manager Mike Rizzo loves to hoist his mantra: “You’re either in or you’re in the way.” As Svrluga writes, that should be his question the rest of the way. (Never mind that Rizzo and perhaps the Nats’ owners often enough have an off-kilter view of who or what’s in the way.) Martinez is in, on Rizzo’s terms, but that hasn’t alleviated his in-game confusions and his players’ inconsistent abilities to execute.

“If this guy ever gets to work with a young team,” Boswell wrote, “that grows with him and melds with him as he learns to handle a pitching staff and a bullpen . . . he might be good.” Might, in more ways than just strength, doesn’t make right. And Martinez has managed the Nats to the fastest 31st loss of a season since the team landed in Washington in the first place.

If Martinez’s execution orders have been signed and sealed, you can be forgiven if the list of reasons ends with, “Allowing the manager most likely to be guillotined to lock him into the blade’s path instead.”

This season especially, that’s so Nats.