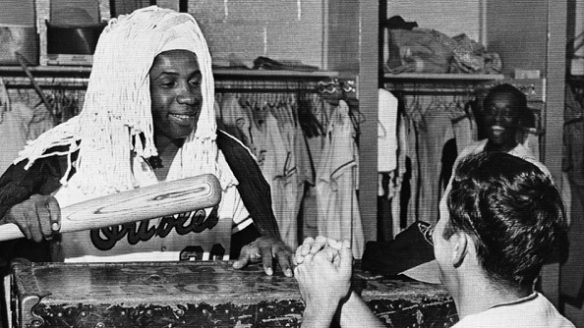 Judge Frank Robinson was the Learned Hand of baseball’s kangaroo courts. The Mets (whose future manager Davey Johnson you see pleading before Judge Robinson) ought to bring the tradition to their clubhouse. Anything would be an improvement over their current lapses . . .

When Robinson Cano loafed on a double play grounder thinking there was one more out than there actually was Friday night, Mets manager Mickey Callaway responded almost with a shrug. Actually, it was closer to the indulgent momma assuring Junior it was no crime to put his foot through the neighbour’s china closet because the china closet had no business being there.

It happened during an 8-6 loss to the Marlins, of all people, the basket case of the National League East. The six runs would be the only six the Mets scored all weekend long against the Fish. With Callaway’s job firmly on the line.

Except that, come Sunday, while the Mets made Marlins starter Sandy Alcantara look like Sandy Koufax, Cano—who had a long enough standing reputation for not always hustling out of the batter’s box when it wasn’t a too-obvious pop fly infield out—struck again. He dropped one in front of the plate in the fourth with J.D. Davis on first. He stood there, as if arguing the ball was foul. It wasn’t, and the Marlins executed a 1-6-3 inning-ending double play.

Junior put his foot through the neighbour’s china closet again.

“I don’t want to say it’s a bad look because, like I said, I thought it was foul, like everybody else,” Cano said after Sunday’s 2-0 loss and the attendant brain vapour. Except that everybody else knew the ball nicked off the plate and sat on the first base line before Marlins catcher Chad Wallach fielded it to start the DP. Cano never left the box other than to plead with plate umpire Jordan Baker. This time, someone’s going to fan Momma’s behind for it, since Momma won’t fan Junior’s behind for it.

There’s never a kangaroo court around when you need one. The Mets need one. Bad. If the manager isn’t going to sit on his players for mental mistakes, the players need to police themselves. Kangaroo courts used to be the perfect method for holding teammates accountable.

Sure, they’d be fun and funny, and often as not a kangaroo court’s chief judge would convict the miscreant and fine him a fair amount over something patently ridiculous. But the kangaroo courts also held players accountable for mental mistakes and deportment violations. The Mets probably aren’t the only team who could use one, but right now they may be the most obvious candidates.

The late Hall of Famer Frank Robinson—who brought the concept from Cincinnati to Baltimore after his infamous trade—was probably the Learned Hand of baseball’s kangaroo jurists. Fail or lapse on the bases and Judge Robinson, wearing a kooky contraption of an unused white string mop glued to a catcher’s helmet and wielding a bat for a gavel, would lighten you in the wallet and maybe hang his Base Running Award from the top of your locker—an old, beat-up spiked shoe. If you were too much of the proverbial red ass, the Judge would also leave you a red-painted toilet seat. If you were caught talking to girls in the seats for too long, it’d cost you a buck, as it often did outfielder Don Buford.

That recollection courtesy of The Hardball Times‘s Alfonso Tura, who wrote last month about the rise and fall of baseball’s kangaroo courts. Tura noted there were some managers who thought them threats to their own clubhouse authority while other managers actually asked certain players to open them. Hank Bauer and then Earl Weaver with the Orioles throve on Judge Robinson’s courts.

In fact, Weaver himself didn’t mind being hauled before Judge Robinson. “I was among the first — and most consistently — fined because my coaches ganged up on me,” the customarily ornery manager once told The New York Times. “In a doubleheader in Cleveland, I rested Mark Belanger in one game, then put him in for defense in late innings. Mark made two errors. In the clubhouse afterward, the kangaroo court was called to order, and Billy Hunter stood up and said: ‘Your honor, I’d like to charge Earl Weaver with misguided managing. He sent in Belanger for defense, and Mark made two errors’.”

Yogi Berra all but begged a Robinson disciple, Don Baylor, to convene one with the Yankees in 1984. “Yogi was like Earl Weaver; he didn’t see the court as a threat for his authority,” Tura wrote. “He thought the court would bring the emphasis back on execution. And he also looked to inject some levity to stop the boredom and frustration. Baylor’s first choice was to name [Hall of Fame pitcher] Phil Niekro as a one-man Supreme Court. Frank Robinson never reported to a higher authority, but Baylor assumed that Niekro’s word would outrank his. To appeal any fine he delivered, players had to consult Niekro. If they lost, the fine automatically doubled. Baylor knew that Niekro was implacable. He never changed a verdict.”

Baylor continued the practise after he left the Yankees. His fines weren’t exactly expensive, either. “If you batted with a man at first or second base and less than two outs, you either advanced the runner or it was five bucks,” Tura wrote. “Fraternization also cost five dollars. Two minutes, no more, were allowed to ask a friend on another team about the family.”

Pitchers may have faced a slightly different scale. “Pitchers were punished for allowing 0-2 base hits, with the severity of the penalty depending on the circumstance. Baylor’s fines were in the five-dollar range. When Niekro surrendered a grand slam to Ken Phelps on a 0-2 pitch, the fine was $100 — $25 for each base.” Baylor’s only other $100 fine was slapped on Red Sox reserve Steve Lyons—for being thrown out at third on what should have been an easy advance.

The custom among teams who convened kangaroo courts was that all the fines paid throughout the season would normally go to pay for a pleasant party at season’s end. Robinson made an exception in 1969: he ordered the money be given to Reds backup catcher Pat Corrales, whose wife died while giving birth to their fourth child.

Someone in the Mets clubhouse needs to convene a kangaroo court. It could be Jacob deGrom, the defending Cy Young Award winner. It could be Noah Syndergaard, who dropped Alcides Escobar with a message pitch to open Game Five of the 2015 World Series after Escobar and the Royals spent the first two Series games batting as if they’d had Barcaloungers in the batter’s box. It could be Wilson Ramos, in his first season with the team but known as a clubhouse leader wherever he goes.

Of course, if Callaway isn’t out of a job before the umpire hollers “Play ball!” Monday, the Mets’ court could probably fine him enough for infractions enough to blow the whole team to dinner at Tavern on the Green the same night.

The Nationals come to town Monday, and they wouldn’t exactly be hurt if they convene a kangaroo court, either. Though in fairness they, like the Mets, could probably haul their manager before the bench a few times. The Nats have looked fundamentally less than sound, too, this season, but then Dave Martinez has tried compensating for their injury list adventures by playing so many people out of position Frank Robinson could probably collect one day’s worth of a Max Scherzer’s salary in a week’s worth of fines.

Scherzer, Anthony Rendon, Stephen Strasburg, and Ryan Zimmerman might be the best Nats candidates to don the wig mop and wield the bat gavel. It’d be worth the price of admission to catch Judge Scherzer pounding a $100 fine on Martinez for playing anyone else out of position or on the bullpen for bringing blow torches instead of pitches to the mound.

At this point, it could almost be anyone on either team. Unless the Mets and the Nats really do have a few too many kangaroos.