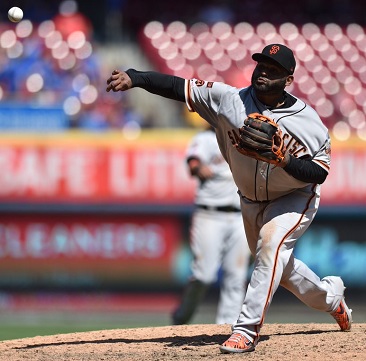 The late Joaquin Andujar was known as a time bomb on the mound and an occasional philosopher: “In baseball, there’s just one word—you never know.” I call it Andujar’s Law.

Brother, was Andujar’s Law upheld without the slightest chance for an appeal in Cincinnati Monday.

And, oh, how Andujar himself would have loved it. Not for the final score, with the Reds smothering the Giants 12-4, but for Pablo Sandoval of all people entering the history books.

Next to Hall of Fame pitcher Christy Mathewson, of all people.

He stole third in the third. He hit a three-run homer in the sixth, in the bottom of which inning the Reds sent five across the plate including by way of two of their record five men hit by pitches taking the plunks with the bases loaded. With the game that far out of hand, Giants manager Bruce Bochy let Sandoval pitch the eighth.

And why on earth not? You’re getting blown out. You don’t want to burn another reasonably reliable relief pitcher if you can help it. What do you have to lose by sending a third baseman about whom roly-poly may be the understatement of the season out to the mound to take one for the team?

What’s the worst that can happen? He gets beaten like a pinata before he gets a third out in a game that left the airport like a Dreamliner long before you got to this point? On the bright side, Sandoval gave you an inning once before, on the wrong end of another blowout, and didn’t surrender a single run.

And he still hasn’t after Monday’s effort. Kung Fu Pitcher faced the minimum three batters and not a single Red crossed the plate on him.

Mathewson had a 2.13 ERA at the time he nailed his bomb, theft, and shutout in the same game, also for the Giants, which he did 23 May 1905—also against the Reds, incidentally. The fact that Sandoval’s only pitched two full major league innings in his life is a mere technicality. He has a couple of bragging rights on the Big Six.

In fact, other than the one that plunked Jose Peraza leading off and another that sailed up and away from pinch-hitter Josh Van Meter, Sandoval worked around the corners and the edges of the plate, believe it or not. More unbelievable: Sandolval threw first pitch strikes to two of his three hitters and threw seven strikes out of ten pitches total. He could have a future as a slop-tossing relief pitcher with a bit of a flair for making bats produce contact outs.

Because after Sandoval plunked Peraza—no, it wasn’t anywhere near a purpose pitch, since Peraza was one of the least offensive Reds bats to that point in the game—Van Meter flied out to left. Then he sent one low enough in the zone for Nick Senzel to dial Area Code 6-4-3 for the side.

Served Senzel right for going long twice earlier in the game, hitting Giants starter Drew Pomeranz’s second pitch over the right field fence to open the bottom of the first and, perhaps showing Pomeranz just a shade of mercy, waiting till the third pitch leading off the second to send one a few columns to the right of where his first bomb landed.

In between those two homers the Reds dropped four more on the Giants in their half of the first, with Eugenio Suarez hitting a two-run home with nobody out yet, then a one-out walk, an RBI triple, and an RBI single.

The only other problem with Senzel’s first bomb was that he had to wait until a swarm of bees finally abandoned the home plate area. Considering the outcome it was as though they were sending the Reds a little encouragement: “Sting ’em!”

Because the only stinging the Giants really did was relief pitchers Pat Venditte and Sam Dyson stinging the Reds with hit batsmen in the sixth. Venditte, the ambidextrous reliever, hit Jose Iglesias, Peraza, and Van Meter with pitches, VanMeter with the bases loaded. Then Dyson took over, caught Senzel looking at strike three on the corner, and plunked Joey Votto on 0-2 with the bases loaded still.

The Reds scored five times in the inning and two base hits accounted for three of them. The four plunks tied a major league record for a single inning, set during the same year in which the Brooklyn Bridge opened to traffic and Chester A. Arthur was in the third year of his only term in the White House.

Still, when the game-opening bees or the Reds outscoring the Giants 37-24 in the four-game set split weren’t the talk of the hour, Sandoval’s relief pitching was. Aided and abetted by Sandoval himself.

“Pitching is not easy, but it’s easy for me because I have fun with it,” he told reporters after Monday’s game. “I don’t care about the situation.” Probably excellent thinking when you’re on the mound no matter what the game looks like when you take it. Then the Panda got somewhat serious. Only somewhat.

“Today was tough because I wasn’t in the windup,” he said. “I had a man on first. I just throw the ball up there. They hit it. What are you going to do?”

You could do just what Sandoval actually did—throw strikes and work around the rim of the zone. He ended up having the best strike percentage of any of the Giants’ six pitchers on the day. And, better than the Reds’ three.

You won’t necessarily hear Sandoval complain. Even if he makes possibly retired Bartolo Colon look like a Jenny Craig poster boy. Do we now call him the Bigger Sexy?

“It was fun,” Kung Fu Pitcher said. “It was a tough loss. Whatever I can do to help this team. I’m going to be a man. I’m going to take a punch and sacrifice everything to help the bullpen to rest one more day.”

Maybe Bochy won’t have too many qualms if he finds himself with a tired pen later in the season, a game more on the line than Monday’s, and a willing Sandoval ready to take the bump? Dare to dream. But isn’t part of baseball’s fun dreaming?