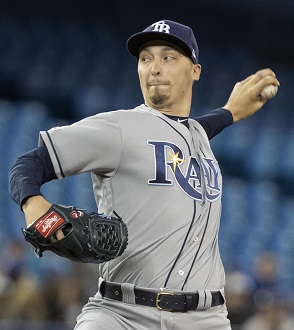 If it comforts Blake Snell any, his broken toe from a falling bathroom decoration pole probably isn’t baseball’s weirdest injury . . .

The American League’s defending Cy Young Award winner is learning the hard way how unforgiving certain heavy objects are when not handled appropriately. When Blake Snell decided a granite decorative stand didn’t look quite right in his bathroom, he decided to move it—forgetting it was a four-piece structure weighing eighty pounds total.

A piece landed on Snell’s right foot. The foot on which the lefthander lands when he throws a pitch. The fourth toe on his foot got fractured. Ten days on the injured list at minimum. Snell is only mildly amused.

“It’s like a three-piece set with a bottom base and this pole that comes up like 2 1/2, 3 feet,” he told reporters including The Athletic‘s Josh Tolentino. “It’s right outside the shower. I was like, ‘I’m moving this, it looks stupid.’ I went to move it, I lifted it up and it wasn’t glued to the pole. And the pole came crashing down. Really dumb. That’s what happened.”

Snell getting poleaxed by his own bathroom structure is merely the latest in a longer-than-you-think list of injuries to baseball players that run the entire field from the ridiculous to the bizarre and back to the surreal. Tolentino runs a fair survey of them that merely begin to explain the syndrome.

He missed a few real jewels among the warping wounded, from Sammy Sosa sneezing himself into a ligament sprain in his back to Hall of Famer Tom Glavine breaking a rib while throwing up aboard a flight. And, whether Hall of Famer John Smoltz tried ironing or steaming a shirt while he was in it. Stop right there—Smoltz didn’t exactly do what the urban legend persists in claiming.

“I didn’t steam it while it was on,” he said in 2008. “I set the steamer down, and when I set it down, water popped out and caught me on the chest.” Leaving him a nice little burn mark that his teammates mistook for a hickey, prompting Smoltz to try explaining.

Which prompted a reporter overhearing it not to let the fact get in the way of a delicious story that threatened to have writers ringing Smoltz’s phone off the hook from then on whenever another player incurred an injury from somewhere out of a Saturday Night Live sketch.

The story I cited regarding Smoltz came forth when Hunter Pence, then with the Astros, walked into a sliding glass door. “It’s pretty silly to have this kind of freak accident happen,” he told the Houston Chronicle at the time. “I didn’t really think I would go through a glass door. Normally it wouldn’t shatter. But somehow it shattered and I was in the middle of a bunch of broken glass. I was actually very fortunate because none of the glass was stuck into my wounds.”

Superman usually limited himself to busting through brick walls, not glass doors. Pence thought he was walking through an open door toward his bathroom and hadn’t realised his roommate closed the door first. He’d hopped up a small ledge to go through what he only thought was an open door. Oops. He was lucky to come out of it with only a sizeable number of lacerations.

Those join a pretty fair roll of bizarre injuries, with five more Hall of Famers on the list, too. The mishaps include but are surely not limited to:

Bite Me Dept.—1923: Nondescript pitcher Clarence Bethen put his false teeth into his hip pocket, thinking he looked meaner on the mound when they were out. His lifetime 7.32 ERA thinks otherwise. But in one game he actually hit a double, slide hard into second—and took a bite in the butt from the pocketed choppers. That wasn’t what they meant by putting your teeth into your work.

Jim and Jill Went Down the Hill Dept.—1967: Cy Young Award-winning Red Sox pitcher Jim Lonborg went skiing after the season. That’s where he suffered the torn left knee ligaments that cost him half the 1968 season and left him far less than the pitcher he was in 1967. It’s said Lonborg’s companion on that trip was actress Jill St. John, of whom he may or may not have been in hot pursuit down the slope. Lonborg’s happy ending: he became a respected New England dentist after his pitching career ended. (He retired from dentistry in 2017.)

Chumpionship Ring Dept.—1970: Braves closer Cecil Upshaw thought demonstrating his slam dunk technique by way of an awning on the street was a clever idea . . . until it cost him the entire season, after his ring got caught and he damaged ligaments in his hand.

Back, Back, Back Dept.—1980s: Pitcher Jamie Easterly once took up a backward-running exercise as part of his workout routines and injured his back while running backward and hitting a gopher hole. Easterly had a lot less to worry about when it came to gopher balls: he only surrendered 48 in a thirteen-season career.

Elbow Greased Dept.—1980s: Flaky Indians relief pitcher Ernie Camacho signed autographs for charity one spring, then stopping after about a hundred signatures and heading right for his team doctor complaining about pain in his pitching elbow. I’ve heard of tennis elbow, but . . .

Take Him Out of the Ball Game Dept.—1983: On an off day for the Royals, Hall of Famer George Brett broke his toe running from . . . his kitchen to his living room, to continue watching a Cubs game, specifically to see his buddy Bill Buckner hit.

Rolling Blunder Dept.—1985: Vince Coleman, the Cardinals’ road running base thief, got his foot caught in a tarp-rolling machine at Busch Stadium before Game Four of the National League Championship Series. Incurring a bone chip in his knee and a foot bruise, Vincent Van Go—who set a rookie record for stolen bases that year—was stopped for the rest of that postseason.

Cowboy Down Dept.—1986: Hall of Famer Wade Boggs once missed a week with a back strain suffered when . . . pulling on a pair of cowboy boots. This gave pulling yourself up by your own bootstraps a bad name.

Oh, What a Mangled Web Dept.—1990: Then-Blue Jays outfielder Glenallen Hill fell out of bed and right into a glass table—suffering bruises and cuts on elbows, knees, and legs—as he . . . awoke violently from a nightmare about spiders. Calling your friendly neighbourhood Spider-Man . . .

Ice, Ice, Baby Dept.—1993: Hall of Famer Rickey Henderson fell asleep with an ice bag on his foot . . . and the Man of Steal suffered a nasty case of frostbite, which froze him out of three August games.

Sorry, Wrong Number Dept.—1994: Relief pitcher Steve Sparks once thought that just because a motivational speaker he’d seen could rip a thick phone book in half he could do it—until his dislocated shoulder told him, “No, you can’t.”

Bed Sore Dept.—2002: Outfielder Marty Cordova once suffered a bad sunburn across his face . . . on a tanning bed. Never a bottle of Coppertone around when you need one.

Oh, Deer! Dept.—2005: Promising Rockies rook Clint Barmes was given some choice deer meat by elder teammate Todd Helton. The venison won the battle when its weight caused Barmes to fall and break his collarbone. He went from leading National League rookies in most offensive categories to journeyman after recovering. We’ll presume Bambi isn’t exactly one of his favourite films.

The Nutcracker Dept.—2006: There was the time Hall of Famer Ken Griffey, Jr.’s protective cup pinched his testicle. At least Junior had a sense of humour about those things: when he and Hall of Famer in waiting Adrian Beltre were Mariners teammates later on, Griffey arranged to have Beltre—returning from a testicle injury of his own—serenaded with Tchaikovsky’s Nutcracker.

While My Guitar Hero Gently Weeps Dept.—2006: Few were as snakebitten by injuries as Tigers relief pitcher Joel Zumaya, but the legend of his wrist sprain while playing Guitar Hero may be just that: a legend, one Zumaya himself rather enjoyed letting ride—he was delightfully flaky—while admitting to frustration that his career was compromised and then ended after six surgeries yet to come.

Pie in the Sky Dept.—2010: Marlins utility man Chris Coghlan tore the meniscus in his left knee when . . . he fell while trying to smoosh a pie in the face of Wes Helms, who’d just won a game for the Fish with a game-ending bases-loaded single. It might have been a good thing Helms didn’t win it with a grand slam—Coghlan might have been tempted to try hitting him with a whole bakery.

Jump for Joy Dept.—2012: Yankees pitcher Joba Chamberlain dislocated his ankle while . . . jumping on a trampoline with his five-year-old son.

Honey, I Forgot to Look Dept.—2012: Jonathan Lucroy reached under his bed for a sock and didn’t see his wife fiddling with suitcases on the bed. One of the suitcases fell over the bed and onto Lucroy’s hand. He hit the disabled list after trying but failing to hide that he couldn’t grip his bat properly.

Hold the Mayo Dept.—2012: Mark Buehrle, then pitching for the Marlins, sliced his finger opening a mayonnaise jar a few hours before a scheduled start. He made the start but had a horrid first inning.

Baggage Claim Dept.—Royals catcher Salvador Perez punished his knees enough in thousands of squats behind the plate without blowing the opening of the 2018 season when he suffered a torn medial collateral ligament in his knee . . . while carrying a heavy suitcase up some steps. He’s missing this season entirely thanks to a torn elbow ligament during a spring workout that demanded Tommy John surgery.

I suppose, though, that the ones which might claim the top or at least the hottest prizes for bizarre injuries would go thus:

Hot Nuts Dept.—2012: Stephen Strasburg suffered a rough four-inning outing before then-Nationals manager Davey Johnson lifted him mercifully. Apparently, Strasburg inadvertently got some Icy Hot balm on his jewels. That’s a mishap that usually (though maybe not exclusively) happens when being pranked in a high school locker room or while you’re away at summer camp.

You Gotta Have Bra Dept.—1980s: Giants manager Roger Craig suffered a gash on his hand while . . . unhooking a bra strap. Let’s be nice and presume the bra belonged to his wife.

Wile E. Coyote, Genius Dept.—1985: Hall of Famer Nolan Ryan could throw the proverbial lamb chop past the proverbial wolf, but the Express couldn’t throw either his vaunted fastball or himself past . . . one of a pair of coyote pups he found while driving around the countryside, when the pup bit his finger. It cost Ryan one start and the pups. Wile E. Coyote, there’s hope for you yet. Beep-beep!