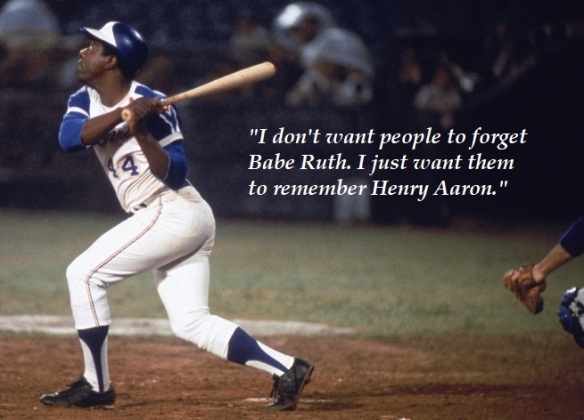 Forty-five years since Aaron rounded the bases, accepting handshakes from every Dodger infielder, and plunged into a crowd at home plate that included, somehow, and much to his surprise, his parents. Forty-five years since Vin Scully, the Dodgers’ broadcaster whose team was the victim as Aaron swung into history, purred inimitably:

He means the tying run at the plate now, so we’ll see what Downing does . . . Al at the belt now, and he delivers, low, ball one. And that just adds to the pressure, the crowd booing. Downing has to ignore the sound effects and stay a professional and pitch his game . . . One ball, no strikes, Aaron waiting, the outfield deep and straight away. Fastball — and a high drive into deep left center field, Buckner goes back, to the fence, it is gone!!! . . . (long pause during crowd noise and fireworks) . . .

Forty-five years, since the unconscionable pressure of mental cases plying Aaron with hate mail for daring to even think about passing the Sacred Babe; of racists plying him with hate mail and death threats enough to require police and even FBI protection for the unassuming outfielder whose career wasn’t bigness as much as it was sustained excellence.

And, alas, forty-five years, since his own team strove to cheapen a one-time-only achievement by putting the gate ahead of the game.

Aaron entered 1974 needing one homer to tie and one more to pass Ruth. The Braves entered 1974 bent on making damn well sure he could do both before the home audience alone, the Braves’ first homestand due to begin after a season-opening visit to Cincinnati. Boy, wouldn’t that have been great for the gate at the old Launching Pad!

Three New York sportswriters (for the record: Dick Young, the New York Daily News; Dave Anderson, the The New York Times; Larry Merchant, the New York Post) said not so fast, post haste. They denounced the plan without softening their prose or apologizing for their stance, and ramped up a drumbeat on behalf of convincing then-commissioner Bowie Kuhn thwarting the plan.

Furman Bisher of the Atlanta Journal-Constitution led an equally passionate counterattack and denounced the New York writers as “meddling Manhattan ice-agers” who would do better to demand the cleanup of Times Square before criticizing the sainted Braves one of whom was about to blast the Big Fella out of the books without wearing a uniform from New York.

What the Braves wanted to do hadn’t exactly been unheard of in baseball to that point, alas. When Stan Musial struck toward his 3,000th career hit, the Cardinals were playing the Cubs in Wrigley Field and Musial shot number 2,999 his first time up in the second game of the set. Cardinals manager Fred Hutchinson elected to sit Musial in the final game of the set, with the Cardinals due for a home-stand to follow, unless he needed Musial to pinch hit.

W.C. Heinz, once a New York Sun sportswriter who’d since turned to magazine writing, put it this way to Red Smith (then of the New York Herald-Tribune):

Maybe I’m speaking out of turn, but it seems to me Hutch is sticking his neck out. His team got off to a horrible start and now it’s on a winning streak and he’s got a championship game to play tomorrow, without his best man because of personal considerations. Not that the guy hasn’t earned special consideration, but from a competitive point of view I think it’s wrong. If the Cardinals lose tomorrow, Hutch will be blasted. He’ll be accused of giving less than his best to win and it will be said the club rigged this deliberately for the box office, gambling a game away to build up a big home crowd.

As things turned out, the Cubs were up 3-1, the Cardinals had a man on second, and Hutchinson sent Musial up to pinch hit. Musial hit the sixth pitch of the sequence for an RBI double. Hutchinson lifted him for a pinch-runner; the Cubs stopped the game to pay Musial tribute; and, the Cardinals kept the rally alive and went on to win the game.

Musial was allowed to do it the right way, after all. Back home in Sportsman’s Park the following night, Musial got an elongated standing O from the home audience and thanked them with a drive over the right field pavilion.

Smith would have something to say, too, when Kuhn stepped in and ordered the Braves not to even think about sending out a lineup lacking Aaron:

He explained to [Bill] Bartholomay what self-interest should have told the Braves’ owner, that it is imperative that every team present its strongest lineup every day in an honest effort to win, and that the customers must believe the strongest lineup is being used for that purpose. When Bartholomay persisted in his determination to dragoon the living Aaron and the dead Ruth as shills to sell tickets in Atlanta, the commissioner laid down the law. With a man like Henry swinging for him, that’s all he had to do. 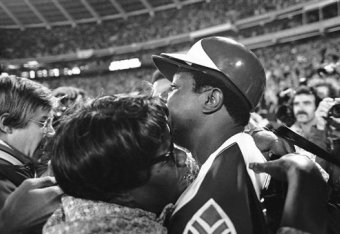 Estella Aaron made bloody certain her baby wouldn’t make history without a hug and kiss from Mom.

Thus did Aaron appear in the Opening Day lineup against Jack Billingham, a Reds pitcher against whom he’d already had four home runs lifetime. Aaron merely drove one over the left field fence in that very first plate appearance to tie Ruth, vindicate Kuhn, Young, Anderson, Merchant, and anyone who believes in honest competition, and receive a pleasant commemoration from Kuhn after he finished rounding the bases.

Braves manager Eddie Mathews, a Hall of Fame third baseman and longtime Aaron teammate as it happens, sat him for the second game of the set, provoking Kuhn to order Mathews to put Aaron back into the lineup for the series closer. Aaron missed fair and square, when the Reds’s Clay Kirby struck him out twice and lured him into a ground out. And home went the Braves.

The first time up against Downing, in the second inning, Aaron walked and scored on an error. Come the fourth, Aaron squared Downing up for the milestone mash. Once a Yankee comer but turned journeyman by a few injuries, Downing earned his living with a fastball that tailed away from right-handed hitters and crawled in on left-handed hitters. This time, it didn’t tail away.

And with one smooth, unadorned, unaffected swing, the ball sailed parabolically into the left center field bullpen.

But Aaron also demolished his own team’s shabby pretentiousness and, running four bases, stood foursquare for earning his milestones the old fashioned way. And once he made his way through the home plate crowd of adoring teammates, he got hit with a big kiss on his face from his mother, Estella. “I don’t remember the noise,” Aaron said later.

Or the two kids that ran on the field. My teammates at home plate, I remember seeing them. I remember my mother out there and she hugging me. That’s what I’ll remember more than anything about that home run when I think back on it. I don’t know where she came from, but she was there.

On 8 April 1974 Atlanta, the South, the United States, and the world learned where Henry Aaron came from. To remember how honorably as well as how courageously he got to meet, greet, and pass Ruth would be nothing less than his due.

“I don’t want anybody to forger Babe Ruth,” Aaron said modestly. “I just want them to remember Henry Aaron.” I think he’s gotten his wish a thousandfold.

A different version of this column was published in 2014.—JK.