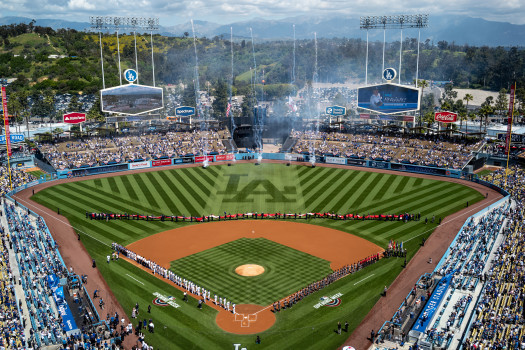 The pre-game Opening Day fireworks at Dodger Stadium were nothing compared to the ones the Dodgers would explode at the expense of old buddy Zack Greinke and the Diamondbacks.

Baseball kicked off in full Thursday after a winter and spring of free agency discontent, a rash of lucrative contract extensions for still-under-control players, and a few controversies involving service-time manipulations. Not to mention an experiment with several proposed rule changes through an independent league, some of which may enhance the game and some of which may compromise it.

And all of that fell out of a lot of minds on Opening Day thanks to a lot of things happening on the fields, including but not limited to:

* The Dodgers, smashing five home runs in the first six innings then three in the seventh, including Enrique Hernandez and Joc Pederson homering twice, former Dodger Zack Greinke getting chased in the fourth inning, and the Dodger homers setting a major league record for Opening Day formerly held by the Mets (six in 1988) and the White Sox (six last year).

And that was on the first Opening Day without Clayton Kershaw on the mound since 2010. Oh, yes—they beat the Diamondbacks, 12-5. The other Dodger destroyers: Corey Seager, Austin Barnes, Max Muncy (he who ended the World Series’ Game Three marathon with an eighteenth-inning blast), and Cody Bellinger.

* The duel of the Cy Young Award winners in Washington—defending incumbent Jacob deGrom and previous three-time winner Max Scherzer. DeGrom punched out ten in six innings’ work; Scherzer punched out twelve in seven and two-thirds. The problem turned out to be newly-installed Met Robinson Cano: he hit one out in his first Met at-bat, consummated an unusual 5-4-2-5 double play when he threw home as Nats rook Victor Robles tried to score after hesitating and ended up tagged out, and rapped an RBI single off Nats reliever Justin Miller thought the run was hung onto Scherzer’s jacket.

* The Phillies and the Braves did their part to show it, even if the Phillies’ brand new, $330 million dollar former Nat didn’t have that big a hand in it. Bryce Harper struck out twice and walked twice, but the second walk ended up hitting where it hurt—the Braves put him on to load the bases for Rhys Hoskins after a pair of Atlanta errors set up second and third and left a base open in the bottom of the seventh. And Hoskins hit one over the left field fence.

The Phillies banked a 10-4 win in which they showed themselves dangerous as a whole team. Even veteran Andrew McCutchen, whom they signed to a three-year deal as a free agent, pitched in when he opened the bottom of the first with a 2-0 launch over the center field fence off the Braves’ starter Julio Tehran. This was on a day when Aaron Nola was walking a little on the wild side—as in, five walks in six innings, which was one more than he walked in any 2018 start.

* Another Cy Young Award duel happened in Florida, between last year’s winner and runner-up in the American League, the runner-up just so happening to have a Cy Young Award (2011) in his trophy case as it was. This time, Justin Verlander shook off a leadoff bomb by Austin Meadows, battened down the hatches, and flattened Blake Snell and the Rays on three hits total to help the Astros beat them, 5-1.

George Springer really flattened Snell with a three-run homer in the third, but Verlander wasn’t going to let Meadows knock him out. “I just hit the reset button real quick,” Verlander said. “It’s not something you want to do, to lead off the year with a homer. But I’ve done it before, so it was let’s go turn the page and try to find it.” When you been-there/done-that, it’s an awful lot easier to shake away such leadoff rudeness. 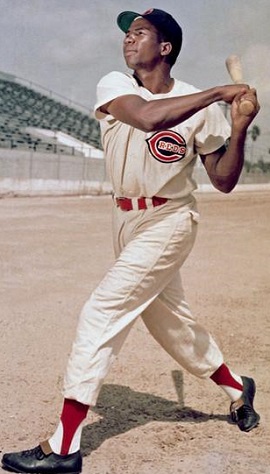 The Reds paid a pre-game video tribute to Hall of Famer Frank Robinson, who died in February and remains the Reds’ all-time greatest position player.

* The Padres rolled against the trend and put touted Fernando Tatis, Jr. on their roster instead of forcing him into yet another service-time manipulation. Their reward was Tatis having a 2-for-3 day including a base hit in his first Show at-bat, making him the youngest to have an Opening Day multihit game since Hall of Famer Robin Yount—in 1975.

His reward was the Padres beating Madison Bumgarner and the Giants, 2-0, even without their own new $300 million man Manny Machado wielding the big bat. That belonged to Wil Myers doing his own Robinson Cano: a two-out bomb off Bumgarner in the third, and an RBI single in the sixth. Good enough to put the Padres above .500 for the first time since 2015.

* Mike Trout, the Angels’ $426 million franchise face, had the best day of any of the half-billionaires with a 1-for-3 with a walk while managing to scare the hell out of Angel fans when he turned up with a leg cramp after a hard slide into second base in the eighth, that following a fourth-inning slide into the same base following a leadoff walk.

The good news: Trout says he’s not seriously hurt despite the “raspberry” he incurred on one of the slides. The bad news, for Angel fans: Khris Davis homering twice, Marcus Semien homering once, and the Athletics beating the Angels 4-0 to shake off the pair they lost to the Mariners in Japan.

* The Mariners may want to open seasons in Japan for a long time to come. Not only did they sweep the A’s in that set, they came home to tear the defending World Series champion Red Sox apart, 12-4—destroying Chris Sale in three innings while they were at it, including three home runs, two by Tim Beckham breaking a personal 0-for-15 lifetime against Sale before teeing off.

And that was after Sale struck out the side in the first before starting the second with a 2-0 lead. “I’m going out there in the second inning, and I pretty much deflated us,” said the man who struck out the side to finish the Red Sox’s fourth World Series triumph of the century. “Three runs, it’s a one-run ballgame, anything can happen and I just go out there and stink the place up. That’s not what I needed to do.”

The Red Sox probably didn’t need to rest Sale for just about all spring training, either.

* 12-4 was also the way the Cubs destroyed the Rangers Thursday. And moving to shortstop (until suspended Addison Russell returns) while hitting cleanup didn’t exactly seem to bother Javier Baez, either: he smashed a pair of home runs including a three-run blast on the first pitch of the fifth from Rangers reliever Jesse Chavez and a solo shot off Mike Minor an inning earlier.

It was all good enough to give Cubs starter Jon Lester his first Opening Day win since he was a Red Sox in 2013—and the Red Sox won the World Series that year. As for the Rangers, Elvis Andrus and Nomar Mazara each hit a two-run homer to account for all the Ranger scoring on the day. It wasn’t enough on a day the Cubs got at least one hit from everyone in the lineup except Willson Contreras and pinch-hitter Daniel Descalso and had thirteen hits on the day.

* One game went to extra innings and, believe it or not, the otherwise hapless Tigers won it, 2-0. On a day Jordan Zimmermann took a perfect game into the seventh—the longest Opening Day perfect game bid since Hall of Famer Lefty Grove threw seven perfect for the Red Sox against the Washington Senators. And that was the same day fellow Hall of Famer Bob Feller threw baseball’s only Opening Day no-hitter at the White Sox.

The perfecto was ruined when Teoscar Hernandez beat out a grounder to the left side of second base and Tigers second baseman Josh Harrison had to slide to stop it before throwing. But on a day three Blue Jays pitchers struck out seven straight Tigers at one point—starter Marcus Stroman (one) to end the seventh, then relievers Joe Biagini and Ken Giles striking out the side in the eighth and the ninth—the game was sealed when Christin Stewart smashed a two-run homer in the tenth to hand the win to Victor Alcantara and the save to Shane Greene.

It was the Tigers’ seventh Opening Day win in eight seasons and the Blue Jays’ eighth straight Opening Day loss.

* Wait till next year? The Jays can take heart: they’re not liable to have the kind of season the Orioles are, after last year’s disaster and an Opening Day 7-2 loss to the Yankees. Or the Marlins, who lost 6-3 to the Rockies. Maybe for the Orioles and the Marlins this year is next year.

* They talked a lot this spring about the new-look Reds after several rather gutsy off-season moves. The talk may ramp up a bit after the Reds knocked off the Pirates, 5-3, and the major damage was done by the reserves: Jose Iglesias doubling twice and driving one in, and pinch-hitting Derek Dietrich hitting a three-run homer in the seventh after Jose Peraza homered.

It kicked off the 150th anniversary of the Reds as a franchise, the 100th anniversary of their first World Series triumph, and it began with a sober tribute to Hall of Famer Frank Robinson, who began his career with the Reds (and remains their all-time greatest position player) and died at 83 in February.

Somewhere from the Elysian Fields where he now reposes (and probably presides over a kangaroo court), Robinson must have smiled on the largest regular-season crowd in the history of the Reds’ Great American Ballpark.