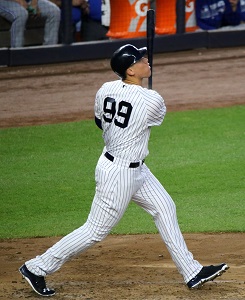 Aaron Judge should be careful what he wishes for . . .

Aaron Judge knows a few things about hitting for distance and does it prodigiously. He would love few things more than his Yankees obliterating the single-season record for team home runs they smashed last year, assuming the team’s health.

Surely, too, Judge wishes his Yankees’ return to the Promised Land occupied at present by the Red Sox, to whom he gave a lot of postseason incentive with his “New York, New York” boombox trolling after they evened the division series out of which the Red Sox went on to shove them in Yankee Stadium.

“We’ve got a good team, a lot of guys that could make a lot of solid contact, and a lot of big boys that when they make contact, man, it goes,” the Leaning Tower of the South Bronx said this week. “We’re a team that’s primed and ready to do that.” And while much of that Yankees’ historical mythology hooks around that famed Yankee power, Yankee fans would probably prefer them primed and ready to return to the Promised Land.

Which isn’t easy to reach in the first place, never mind return, for teams who can out-bop all comers. It was easier to bring Japan to the surrender table in World War II with strategic bombing. Baseball’s most relentless bombers aren’t always baseball’s pennant winners, never mind World Series champions.

The following table shows how that’s gone in each season since division play began. Pennant-winning team home run leaders in italics; World Series winners who also led their leagues in home runs those seasons in bold. (I marked 1994 with asterisks because, of course, there was no postseason that year.)

You may have noticed two things. Thing One: No World Series winner who also led their league in team home runs the same season has done both together more than once. Thing Two: Only once in the divisional play era have both leagues’ team home run kings tangled in a World Series against each other, with the Yankees beating the Phillies in the 2009 Series.

And that was also the only time since 1969 that the Yankees led their league in home runs as a team and even won the pennant, never mind the World Series. They’ve won eleven pennants since 1969 but only in 2009 did they out-bomb the American League and win the pennant and the Promised Land.

The 2009 Yankees are also one of only eight World Series winners in the divisional era to lead their league in long distance the same season. They followed the 1971 Pirates, the 1972 Athletics, the 1976 Reds, the 1981 Dodgers, the 1983 Orioles, the 1984 Tigers, and the 2008 Phillies. Since 1969, nine National League team home run leaders and five American League team home run leaders have won pennants. Chicks may still dig the long ball but it’s not getting as many teams as you think to the Promised Land or even to playing for the lease.

The Dodgers have led the National League in team home runs more often than any other NL team since divisional play began, including last year—nine times. Aside from 1981, they have four more pennants to show for those seasons. Both the Yankees and the Orioles have led the American League in team home runs six times, and 1983 is the only time the Orioles did that plus win the pennant and the Series.

In fifty postseasons starting in 1969 (when the overpowering Orioles neither led the American League in home runs nor overpowered the Miracle Mets), dialing nine (the old euphemism for hitting a home run) hasn’t kept nine home run leaders from dialing 911 when the Series ended with the other guys hoisting the trophy. And teams you remember particularly for collective mayhem at the plate haven’t always gone the distance no matter how often they hit for it.

The Big Red Machine won four pennants and two World Series, but they’re 1-1 in Series in which they entered as their league’s home run leaders. The Pittsburgh Lumber Company led the league in bombing and won the Series in 1971; the Fam-i-Lee Pirates won the Series without being the league’s leading launchers.

The Bronx Zoo won back-to-back Series against the National League’s leading boppers–including Hall of Famer Reggie Jackson’s three bombs on three swings in Game Six, 1977—without leading the American League in the big bang themselves. And the 1982 Brewers led all baseball with 219 bombs, but that was one time the real-life Road Runner beat the real-life Wile E. Coyote’s Acme munitions, Harvey’s Wallbangers losing the Series to the White Rat’s Runnin’ Redbirds—who just so happened to finish dead last for team homers in the entire Show that season. Beep-beep!

In one of the earliest scenes of the Academy Award-winning film Marty, Ernest Borgnine’s Oscar-winning title character, a plain but big-hearted Bronx butcher, ambles into his favourite tavern for a couple of beers following a hard day’s work and asks about that day’s Yankee game. Told the winning score, the first question he asks is, “Any homers?”

My experience with the Yankees is very much like that. Yankee fans always seemed far more enchanted by the bombs than Yankee players did, even when Yankee players seemed concerned enough about them, such as during the Mantle-Maris chase to break ruthsrecord, or Jackson’s unvarnished (and unimpeachable) pride that night in Game Six, or the night three years ago on which Judge himself smashed Joe DiMaggio’s team record for homers on a season by a Yankee rookie.

The same experience tells me Yankee fans consider any season in which they don’t win the World Series a failure, if not a denial of birthright. That may be a little more extreme than the truest cliche about the Yankees being that they simply don’t like to lose. But they could hit 300+ home runs this year and still be failures on their fans’ and their own terms without a return to the Promised Land. Where their eternal rivals to the northeast have been, you know, four times since the century turned.

2 thoughts on “Bombs win wars but not always rings”

Leave a Reply to The Professor On Edge Cancel reply